Digital technology and the human form have come together in Paris, putting the wonders of 3D printing on full display too in “La Fabrique du vivant.’ The exhibit, translating to ‘The Fabric of the living,’ runs at the Centre Pompidou from February 20 to April 15, 2019. Claudia Pasquero and Marco Poletto, ecoLogicStudio founders are participating—along with research partners from the Urban Morphogenesis Lab at The Bartlett UCL, the Synthetic Landscape Lab at Innsbruck University, and the CREATE Group/WASPHub Denmark at the University of Southern Denmark.

The exhibit is part of the Mutations-Créations series and is curated by both Marie-Ange Brayer and Olivier Zeitoun. The concept of this unique show melds both living and artificial life, causing exhibitgoers to consider the interaction between ‘creation, and fields of life science, neuroscience, and synthetic biology.’ The juxtaposition of life and artifice is meant to jar the viewer, as they examine modern, urban forms in art and show the ‘miniaturization, distribution and intelligence of manmade urban networks’ in humans, while displaying the evolution of artificial life too. We have viewed many different creative works via 3D printing over the years to include large scale animal forms, darker fantasy pieces, and interactive exhibitions, but ‘La Fabrique du vivant’ is definitely not your average 3D printed art, offering a unique, highly intellectualized path to understanding the connection between people and the digital age.

The 3D printed ‘in-human gardens,’ are contributed by architects Pasquero and Poletto. The fabricated forms are meant to portray for the human and the inhuman, while addressing both ‘human rationality’ and futuristic artificial intelligence; in fact, they are supposed to viewed as having been developed in partnership with (now keep an open mind here!) ‘colonies of photosynthetic cyanobacteria, H.O.R.T.U.S. XL Astaxanthin.g, and a collective of Asian Fawn Tarantulas, XenoDerma.’

A recent press release explaining more about the exhibit defines H.O.R.T.U.S. XL Astaxanthin.g as an algorithm mimicking coral substratum through 3D printing. The architects used 400-micron layers in their fabrication efforts. Detailing further, they explain that these layers were supported by 46 mm triangular units and divided into 18.5 cm hexagonal blocks. 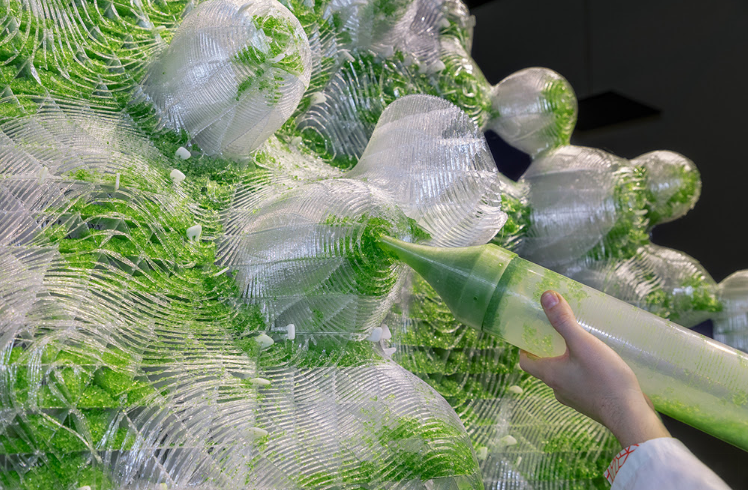 “Photosynthetic cyanobacteria are inoculated on a biogel medium into the individual triangular cells, or bio-pixel, forming the units of biological intelligence of the system. Their metabolisms, powered by photosynthesis, convert radiation into actual oxygen and biomass. The density-value of each bio-pixel is digitally computed in order to optimally arrange the photosynthetic organisms along iso-surfaces of increased incoming radiation. Among the oldest organisms on Earth, cyanobacteria’s unique biological intelligence is gathered as part of a new form of bio-digital architecture,” states the press release.

XenoDerma is defined as a spider web morphogenesis created with 3D printed scaffolding:

“Spiders’ minds, in this case Asian Fawn Tarantulas, do not entirely reside in their bodies, as their webs constitute a form of spatial thinking. Information from their webs become an integral part of their cognitive systems. The behavior of the spiders and the production of silk is re-programmed in XenoDerma through the design of the 3D printed substructure and of its geometrical features. The result consciously seeks productive ambiguity, revealing in the alien beauty of its silky morphologies, an intelligence that resides somewhere at the intersection of the biological, technological and digital realms.”

The pieces were created by a multidisciplinary team led by the two architect/designers, using a large-scale 3D printer capable of high resolution to achieve ‘non-human agency mediated by spatial substructures.’ The artwork is created on a 1:1 scale prototype as the artists see it, on par with other living architectures and an emerging generation of ‘thick biophilic architectural skins receptive to urban life.’ Find out more about the exhibit here.

Discuss this article and other 3D printing topics at 3DPrintBoard.