Today we learn of yet another 3D printed prosthetic hand, but this one is even more unique than the others that we have covered in the past. A group of students at the University of Illinois at Urbana-Champaign have come up with a device which they hope will bring affordable prostheses to developing nations such as Ecuador.

The newly designed 3D printed prosthetic hand has the ability to recognize patterns in a user’s movement. Not all individuals who have lost a hand are alike. Some have a portion of their wrist still intact, while others are missing a larger portion of their arm as well. This new hand features a machine-learning algorithm which allows it to do more than the traditional prosthetic hand is capable of. Instead of only being able to open and close, it can learn the other positions of the hand, making it far more functional.

“Using the machine-learning algorithm based off the signals it picks up from the muscles, it can figure out which of these grips he is actually doing,” explained team leader Aadeel Akhtar, an MD/PhD candidate in neuroscience from the College of Medicine at Illinois to phys.org. “The microcontroller with the machine-learning algorithm will then replicate the grip he’s trying to make. Based on those signals, it sends commands to motor drivers, which churn the motor and make the hand move.” 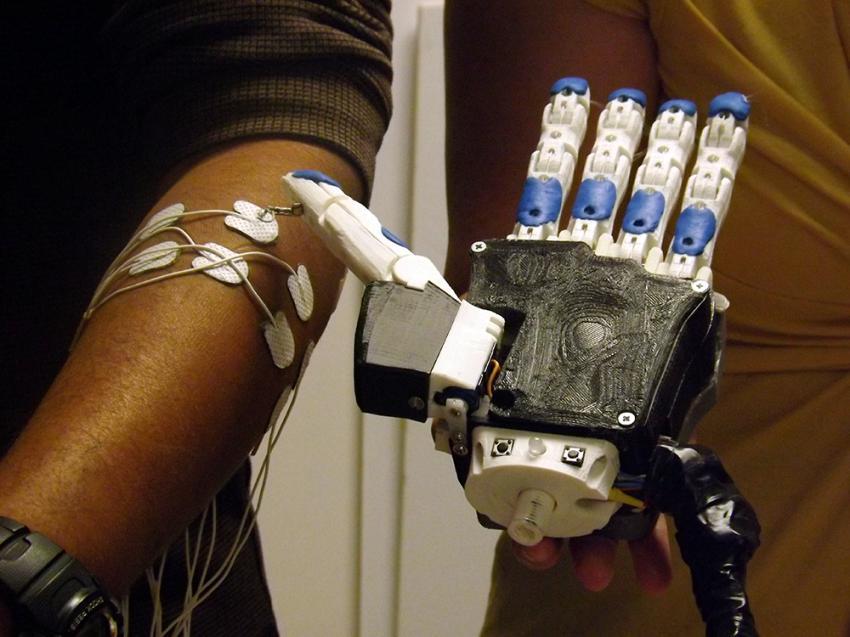 One of the great advantages of using 3D printing to create and customize these individual hands is the fact that they cost a mere $270 to create. Compared to the price that traditional myoelectric prosthesis costs (upwards of $30,000), this provides a means for a solution in developing countries.

In fact, back in August, Aadeel Akhtar and master’s student Mary Nguyen, made their way down to Ecuador to try their creation out on a man in need of a prosthetic hand. “The goal of the trip was to get it to work with a patient,” Akhtar explained. “Although it took some debugging, we were successful.” This model of 3D printed hand takes approximately 30 hours to print out, and an additional two hours to assemble. It features all the needed electronic components in order for it to convert neural signals into movements. It only takes a few minutes to program the hand to work with a particular patient, and it is capable of five different hand movements: open hand, resting hand, closed hand, a fine pinch, and a three-finger grasp.

“We did some initial experiments in the lab and found that with only six minutes of training, users could distinguish between six different grips with 88 percent accuracy without looking,” said Akhtar. “With that kind of result, imagine how well someone could operate it in even a week’s time.”

The team isn’t done yet though. They plan to advance this technology even further by modifying the dynamics of the hand. They also plan on creating a more intricate system of movement as well as adding in some other almost science fiction-like abilities.

“No commercial prosthetic device has any sort of feedback,” Akhtar explains. “We’re going to put sensors in the fingers. Based on the amount of force that the fingertips are detecting, we are going to send a proportional amount of electrical current across your skin to stimulate your sensory nerves. By stimulating your sensory nerves in different ways with different amounts of current, we can make it feel like vibration, tingling, pain, or pressure. Through a mechanical connection from one of the artificial fingers directly to the skin, the patient will also be able to better feel the position of their hand without looking at it.”

It is amazing how only two years ago the prospect of 3D printing prosthetic hands was hardly even conceived. Now we are looking at the creation of devices that can do so much more than their more traditional predecessors, at prices comparable to a routine doctors visit.

What do you think about this latest technology within the field of 3D printed prosthetic hands? Will it lead to the availability of these devices to everyone in need? Discuss in the 3D printed learnable prosthetic hand forum thread on 3DPB.com.