You may not know how to pronounce it at first glance, but IN(3D)USTRY (“in-three-dustry”, officially) has certainly been making a name for itself. Started last year in Barcelona, the young event has quickly grown, joining as part of Barcelona Industry Week for the 2017 edition held this week at the busy Fira Barcelona Gran Via event center. Eight co-located events heralded advances in the latest Industrial Revolution as the Industry Week holdings were set to draw an anticipated crowd of around 50,000.

On the heels of last week’s TCT Show in Birmingham, UK, IN(3D)USTRY is working to establish its place in the increasingly busy 3D printing conference season. Over three days this week, IN(3D)USTRY welcomed visitors from around the world to partake in conversations intended to further the business of 3D printing, including commentary via main stage and speaker corner presentations — 55 of them, in fact, and 5 accompanying round table discussions.

“For now, it is important: this is the reality, this is not sci-fi,” IN(3D)USTRY Director Miquel Serrano told the curated contingent of journalists on the first day of the conference. “These are real projects being done, in different industries.”

The look into additive manufacturing across a variety of verticals was a fitting theme for both the inclusion of IN(3D)USTRY as part of Barcelona Industry Week and the conference’s theme: From Needs to Solutions. Focusing on the reality of solutions underscores the seriousness with which additive manufacturing is impacting the overall manufacturing industry already, and paves the way for ongoing and future developments where 3D printing will take its place – for real – among the Industrial Revolutions that have already reshaped the way things are made.

“We all have this situation where manufacturers know they need to do something in 3D, and they are not sure how,” continued Project Manager Antoni (Toni) Camí. “We are covering the strategies of options. How to integrate these technologies they know are disruptive, but do not know how to do.”

It was clear during the run of this year’s IN(3D)USTRY event that the focus was to stay on the possible. While a range of exhibitors set up their booths — with several industrial machines to be seen including Renishaw RenAM 500M and HP MJF 3D printers alongside a sampling of desktop 3D printers and even more 3D printed designs, proofs of concept, and showcase pieces — the primary focus for many attendees was around the show’s main stage. While this draw was in part due to the small footprint of the show, tucked into the back of hall three at Fira Barcelona Gran Via, behind the co-located chemical and plastics shows, more of it came down to the caliber of speakers gathered.

The organizers at IN(3D)USTRY made every effort to ensure that the show provided value for its visitors. The goal, they said, was not to compete with other European shows, like the more-established and significantly larger TCT Show and formnext, but to complement these and offer a resource in a growing industrial area. 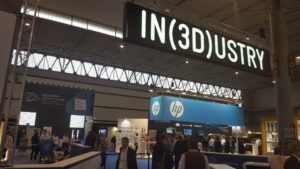 “We are about community, about fostering industry,” Serrano noted on the first day. “We want this show to be established for a younger region, where advanced manufacturing is not as established. There is big engineering, big aerospace activity in Spain,” he said, which makes the country a good place to host the event; still, “we don’t want it to be only Spain,” as an international perspective remains key to true growth.

Barcelona, in addition to being the center of the latest sociopolitical upheaval, is home to a wealth of business operations. From 3D printing — HP and BCN3D spring to mind — to dedicated additive manufacturing development in construction and cultural heritage — such as seen at IAAC (Institute for Advanced Architecture of Catalonia) and ACCIONA — is central to much of Iberia’s growth in the future of manufacturing. 3D printing with sustainable engineering materials is allowing for unique approaches to civil engineering, as IAAC and ACCIONA have both highlighted in their innovative solutions in construction. A Moai head big enough for me to hide behind “It is not only the manufacturers anymore,” Camí said. “We are seeing in Catalonia that these traditional companies are deciding to join the 3D printing. Here at the show, we try to cover vertical sectors; we felt we would like to cover gaps and more technologies.”

Among the verticals featured at this year’s IN(3D)USTRY were automotive, aeronautic, healthcare, consumer and retail goods, civil engineering, and industry. An early media tour highlighted a few of the exhibitors present on the small show floor, many of whom would be among the presenters during the course of the event.

Materialise, for example, was showcasing a variety of applications for the highlighted verticals.

“What is more interesting for us is producing products,” said Sales Manager for Materialise Spain Martin Saez, who previewed his anticipation for the event. “We are industrial people, we like to show we do things for the customer that will produce them money. Additive manufacturing will be a way for production that is economically interesting. We find a way to apply additive manufacturing to business and make it better.” The perspective on production was a common thread through the event, as Marketing Executive at Renishaw Ibérica George Gibbons further noted.

“We’re no longer talking about only rapid prototyping or custom tooling; we are moving forward for more in production,” Gibbons explained.

Showcased alongside customer use cases, the technologies highlighted the solutions they were providing for user needs. Materials, advances in machines — such as Trumpf‘s newest, two-laser metal 3D printing machine — and finishing techniques were on display in the ‘museum’ of exhibits, as Serrano called it. A case of case studies from Ricoh. Top one is probably my next new car, once it’s out of the concept phase.

The panels of accomplished speakers gathered to present during the event showed a careful attention to detail, as well, which was greatly appreciated by many in attendance. Sessions, geared toward the target verticals, focused on how each organization went From Needs to Solutions, presenting real-world use cases and applications wherein 3D printing came into play for viable responses to new and existing workflows. It must be said as well that this conference did a remarkable job in gathering its speakers from a diverse array of companies, and with an appreciated diverse group of presenters; several of the panels had an even gender distribution of speakers, and it was refreshing to hear from women working in the industry today. While hopefully next year’s event will have more comfortable main stage seating, this year I found the presentations to be an absolute highlight of the event, and only wish I could have listened to even more of the well-curated agenda. Round table discussions in automotive OEM… As 3D printing continues to mature, shows like IN(3D)USTRY offer a valuable resource to businesses to gain international perspective on capabilities, as well as catch up through engrossing sessions about the latest developments. Further highlighting innovative design are contests such as RESHAPE, which saw its 2017 winners announced on the second day of this year’s IN(3D)USTRY, where all the finalists were winners in imaginative high-tech design.