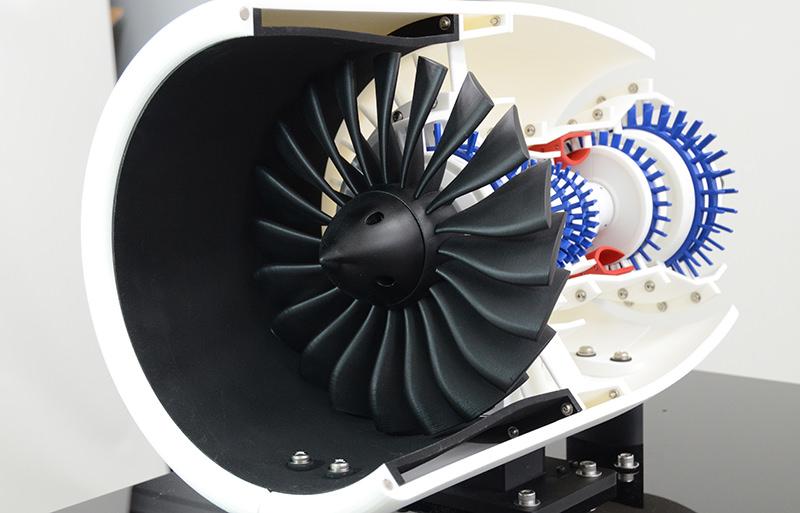 As time goes on, we hear more and more stories concerning the 3D printing of engines, engine parts, and other mechanical objects which we would have only dreamt of 3D printing several years ago. General Electric is at the forefront of using 3D printing for jet engine parts. They even released files on Thingiverse for hobbyists to print out models of their own jet engine. They aren’t the only company using 3D printing in relation to the creation of jet engines though. The working model, which Yoshihiko Yonetani of id.arts told 3DPrint.com was created in a very limited time frame, took them merely one day to design, another day to model, and one week to 3D print. To print most of the body of the engine, the company used selective laser sintering (SLS) 3D printers to print in a nylon polyamide material. For many of the parts, such as the rotating turbine, low pressure compressor, high pressure compressor, combustion chamber, cone nozzle and high pressure shaft, id.arts used a Stratasys FDM based 3D printer to print them in ABS plastic.

In addition to these printed pieces, the company also needed to purchase some other mechanical parts such as a bearing, pulley, low pressure shaft as well as parts of a stainless steel system. These parts were sourced from Misumi Worldwide, a Japanese parts manufacturer. Of course, no jet engine is complete, without a motor to turn the turbines. id.arts used a speed control motor, which they got from a company called Oriental Motor.  It allowed for the control of the engine via a remote control. The results? They were quite amazing. The 65cm wide working replica was exactly what IHI Corporation was looking for, and thanks to 3D printing technology, id.arts was able to come through, even in a limited time frame.  All in all, the engine took 105 different 3D printed parts, plus 30 more mechanical parts and 440 auxiliary parts such as nuts, bolts, and screws.

What do you think about this incredible creation in a limited frame of time which the company says was approximately 2 weeks?  Discuss in the 3D printed jet engine forum thread on 3DPB.com. Check out the video of the engine in action below.