Because Of Course It Has, the 3D Printable Creepy Ronaldo Bust Has Arrived

Most airports or landmark buildings tend to be named after ex-leaders, war criminals, founding fathers who used to own other humans or global corporations that pay a lot of money for the privilege. But sometimes a celebrity or other notable personality becomes famous enough that a city somewhere is happy to honor them alongside the men who ruined history. Real Madrid player Cristiano Ronaldo is by far the most famous person to come from Portugal’s Madeira Islands, and as a token of their local pride they’ve gone ahead and named their international airport after him.

In addition to being the new namesake of Aeroporto Cristiano Ronaldo, the soccer – I mean football – star was also given the honor of having a bronze bust of his globally recognizable face made to greet passengers as they arrived. I’m sorry, did I say greet? I should say he was given the honor of a bronze bust of his barely recognizable face to terrify passengers as they arrive. It didn’t take long for the internet to get a look at the creepy bust and do the appropriate level of mocking, because let’s face it, this bust, created by artist Emanuel Santos, is a bit of a bust. 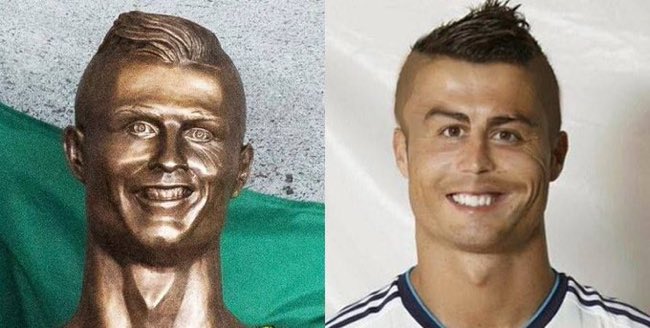 Ronaldo’s chiseled good looks have made him a sex symbol all over the world, but for some reason the Santos creation sees him as a leering construction worker asking ‘hey honee, you got a man?’ to every woman walking by. He made him look like you definitely wouldn’t want to leave your drink around him unattended. The more that you stare at that creepy, sneering face and its beady, asymmetrical eyes, the more that you feel like there should be banjo music playing behind it at all times. Remember that scene in the fourth Alien movie where Ripley finds that room with all her failed, deformed clones? Ronaldo should be really pissed off at some scientists is all I’m saying.

Winona Ryder was in Alien: Resurrection, so to make that reference less random I’ll let her recent performance art at the 2017 SAG Awards explain the world’s reaction to Creepy Ronaldo: Thankfully, the internet isn’t just here to mock the highly mockable, it’s also here to allow you to own a piece of that which it mocks. Many a now tired meme has found its way to a 3D printable version, and Creepy Ronaldo is the latest. I don’t want one in my home by any means, but I still want to 3D print a couple out and place them right outside the windows of a few people I don’t like. What have you done to me? Why do I look like Sloth from The Goonies?

The 3D printable Creepy Ronaldo was created by MyMiniFactory designer Antoine, and it captures every melty-faced feature of the original. The digital recreation is now part of the MyMiniFactory Scan The World collection of free, 3D printable versions of some of the globe’s most iconic landmarks, public works of art and antiquities. Which seems humorous now, but in 100,000 years when our society is long gone and digital architects try to learn what they can from what we left behind, I can only assume that they will conclude Cristiano Ronaldo was the unhinged face of the madman who brought ruin to us all. Discuss in the Ronaldo forum at 3DPB.com.