Baltimore entrepreneurs and makers, Todd Blatt and Ben Howarth, have successfully combined nostalgia, fashion, microchip technology and 3D printing to create a thoroughly contemporary take on classic jewelry. The locket, a jewelry item that conjures images of grandmothers, sweethearts and secrets concealed, has been transformed in the 21st century while retaining its characteristic element of surprise.

Blatt and Howarth’s UpLocket, while a fond nod to the past, embraces what the two refer to as “wearable technology.” Rather than imitating lockets, traditionally produced from jewelry-grade medals like sterling silver, the UpLocket is 3D printed in colorful nylon, with a variety of colors available for purchase. Blatt, who has his own 3D-design site, Custom3DStuff.com, designed the pendants using AutoCAD as well as MeshMixer and then printed them using “laser sintering 3D printing technology.

There are a variety of different styles from which buyers can choose, including what the creators call the “Swirl,” the “Nuclear Pendant,” the “Opening Round,” the “Simple Heart Pendant,” a customized version of the “Simple Heart,” as well as earrings in these designs.

While it still hinges and opens to reveal a photograph–or, of course, an alternative item or object of its wearer’s choosing–the UpLocket holds an additional secret: A small, embedded NFC (Near-Field Communication) chip allows you to share a photo, song, or even your contact information–easier than scrawling it on a cocktail napkin–with that special someone.

Blatt and Howarth explain, “NFC technology isn’t new. If you’ve ever used a security keychain fob to unlock the door to your apartment building or parking garage, you’ve used NFC tech.” The chip gets its power from “nearby compatible electronic devices,” so it needs only an antenna to make the connection. The magnetic fields produced by electronic devices like cell phones are powerful enough, “to create a current in the antenna…to activate the chip and allow it to send its signal.” 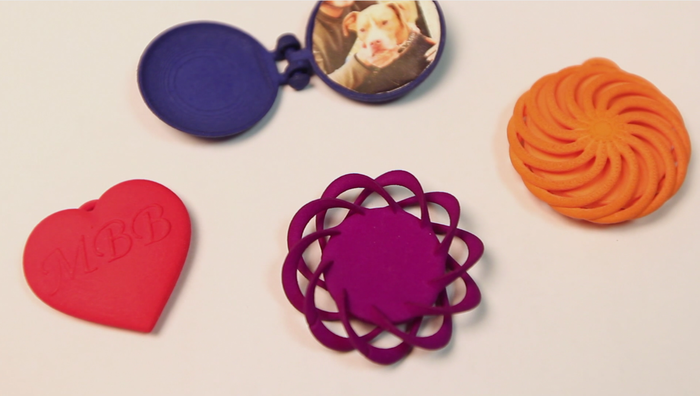 The UpLocket wearer programs the chip to, according to Blatt and Howarth, “send a message to a nearby phone containing a self-opening link to a URL. You can set it to a URL of a photo, YouTube video, photo album, or anything else you like.” Your locket needs to be in close enough range to a device to send the message, and its inventors video demonstrates this exchange as one of tapping a cell phone with the locket itself. “Simply check to make sure that the phone is NFC enabled (nearly all new Android phones are, as well as many others).” For the trickster, there’s an additional appeal, claim the makers of UpLocket, “To make a stranger’s phone play your favorite song.” “The possibilities,” they muse, “are limited only by your imagination.”

Blatt and Howarth explain how to order an UpLocket and how to contribute to their Kickstarter campaign, which they hope will not only fund the production of UpLockets for supporters, but also spread the word about their clever new, 3D printable wearable gadget. Are you considering backing this creative new project on Kickstarter? Discuss in the Uplocket 3D printed locket forum thread on 3DPB.com. Check out the Kickstarter pitch video below.