Some invitations, you don’t turn down. If any of the following invite me for dinner, I can effectively guarantee my presence: Josh Groban, Benedict Cumberbatch, David Tennant, HP. It’s a strange list, I suppose, but there we are. While I had already been looking forward to attending this year’s International Manufacturing Technology Show (IMTS), along with more than 111,000 other registrants, when I received an invitation to join several executives and members of the HP team, along with a 3D thought leader, I boarded my flight to Chicago with even more anticipation of great conversations and discoveries to come from the already sure-to-be-informative week-long event.

I had learned back in May that events with HP’s 3D printing team are sure to involve vision, in-depth thought, true dedication — and excellent conversation over meals. So on Monday night, I joined a table of about 12 other guests among the team from HP and guest speaker Chris Connery, eager for HP’s inaugural Voxel Vision Dinner.

“In 2014, IMTS featured the world’s first 3D printed car. Since that industry milestone, there has been considerable progress and it makes sense that 3D printing is one of the hottest topics at IMTS 2016,” noted the invitation.

“In the not so distant future, 3D printing will shift from prototyping and short-run manufacturing to a full-scale, production-ready technology. Companies that adopt 3D prototyping today will lead in production tomorrow. Hear more about new use cases, applications and materials pushing the technology and the industry forward.” Hosting the dinner, and leading conversation, were CONTEXT Vice President of Global Analysis and Research Chris Connery, as well as

The assembled dinner company were set to “discuss the technology on the verge of disrupting the $12 trillion manufacturing industry.” Following some hors d’oeuvres and light conversation at Chicago’s delightful Grillroom Chophouse & Wine Bar, we all sat with guests and hosts intermingled along a table, a side table filled with 3D printed objects to the side like a visual dessert offering. Chris Connery held the room first, following introductions, ticking off stats of both the 3D printing and the overall manufacturing industries. He noted that the several-billion-dollar forecasts for the 3D printing materials and hardware industry are still quite small, all told. Even with double-digit annual growth and ever-rising sales and introductions, additive technologies still have a lot of inroads to make to truly impact the multi-trillion dollar manufacturing industry. Keeping his attention to the small group at hand, Connery asked each of us how long we had been acquainted with 3D technologies — and, indeed, how much of our work actually involved it. I had one of the highest percentages, representing 3DPrint.com, with Connery suggesting that somewhere in the neighborhood of 200% of my work was involved in 3D tech; it was therefore interesting for me to hear from those more involved in other facets of the industry, those who hadn’t perhaps seen a Multi Jet Fusion machine in action yet. 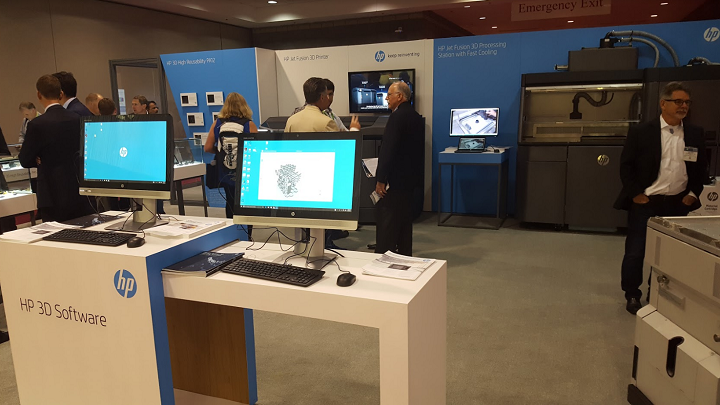 As we had all observed at the exhibit halls of this year’s IMTS, of the 1.3 million square feet of exhibitions, only a small percentage was given over to 3D technologies. Still, it was cheerfully noted, the previous IMTS, held in 2014, hadn’t seen any 3D printers on the floor, just a few resellers and, admittedly, a single 3D printed car. With a dedicated pavilion of exhibits this year, as well as several booths in different sections of the buildings, IMTS 2016 had already come a long way. But there’s still a lot of growth potential here. And word is getting out about what 3D manufacturing is capable of.

HP’s recently introduced system focuses on the voxel, taking technology down to the smallest components to bring about the largest results. As executives from the company had noted when I first spoke in person with them in Barcelona, it’s this focus that allows for output of actual functional parts at unprecedented speeds.

“In 3D printing, a voxel represents a value on a regular grid in a three-dimensional space; like a pixel with volume. Each voxel contains volumetric information that will essentially bring a product to life with the desired properties. The Mighty HP Voxel is the magic ingredient that makes HP 3D printers unique today and in the future. With the ability to individually address up to 340 million voxels per second, HP’s Jet Fusion 3D printers are up to 10 times faster than any other 3D printers on the market today, with unprecedented quality measured by precision and strength, and at the lowest cost per part produced.” We watched a few brief videos over dinner as well, looking at HP’s facilities and technology, revisiting the stress test and capabilities of printed parts, as had also been shown at both Barcelona and RAPID. One facet of their color capabilities that was new to me was the unique color stamping that can immediately identify a given part on their dedicated app. A small gear, blue with a pink outside to a casual glance, in fact holds a unique and complex code through the exact makeup of that not-quite-solid blue center. As Schiller demonstrated, he could scan the gear with his smartphone and the app would automatically and correctly identify the exact part — ready to print another identical gear if directed. The HP team told us that even they were surprised at how well it worked, including through glass at a display case while a gear was actually in movement.

Over dessert, we all discussed some thoughts as well about the future of 3D technologies. The general consensus was that everyone gathered was eagerly anticipating the next IMTS, to be held in 2018, where surely the makeup of additive technologies on display would take up a further vast expanse of floor space.

[All photos taken in Chicago by Sarah Goehrke for 3DPrint.com]