South Korea has done several things that have made it stand out in the 3D printing world, especially lately. The country has made more than a few headlines for its history-making medical procedures involving 3D printing, as well as for expanding metal 3D printing in military applications. Then there are the plans for 3D printed ships – at first glance, it looks as though South Korea’s 3D printing and other technological industries are booming. However, headlines rarely tell the whole story, and a new report published by the Hyundai Research Institute (HRI) suggests that South Korea still has some serious technological catching up to do.

The report, entitled “The Arrival of the Fourth Industrial Revolution and Its Implications,” was published on August 15 and analyzes the performance of major industrial nations in terms of their readiness for Industry 4.0, the automated, digital and data-driven era that is rapidly establishing itself across the world. The report references a white paper published by UBS earlier this year, titled “Extreme automation and connectivity: The global, regional, and investment implications of the Fourth Industrial Revolution.”  In it, UBS ranks the countries that their analysts have determined to be the most capable of adapting to Industry 4.0, and South Korea ranks as just 25th out of 139 countries. Five categories were taken into account in UBS’ rankings: labor structure flexibility, skill level, educational and adaptive skill, infrastructure suitability, and legal protections. In first place was Switzerland, with the United States coming in fifth. All in all, the HRI report concluded that the growth rate of Industry 4.0-related industries is higher than for other industries, based on an analysis of six areas: capital goods, pharmaceuticals and bioengineering, semiconductors and semiconductor equipment, software and services, technological hardware and equipment, and communication services.

While that’s encouraging news for much of the world, it’s not great for South Korea; the report found that sales in the country’s Industry 4.0-related companies rose at an annual average of 1.8 percent from 2011 to 2015, a dramatic drop-off from the 9.7 percent growth seen in the five years before. Profitability also declined; between 2011 and 2015, operating profit ratio dropped by 0.4 percentage points, after increasing 0.6 percentage points from 2006 to 2010.

In contrast, several of the other countries analyzed showed moderate to significant improvement in Industry 4.0 growth and operating profit ratio. Japan showed the most dramatic change, with annual average sales increasing from minus three percent to 4.5 percent. The US saw an increase from 4.5 to 6.5 percent; China went from 12.6 to 13.2 percent, and Germany’s sales grew from 4.5 to 5.3 percent.

In terms of operating profit ratio, Japan went from minus two to minus one percent, while the US went from minus 1.5 to minus 0.8, and Germany from 12.6 to 13.2. China fared less well here, with operating profit ratio dropping dramatically from minus 0.8 to minus 3.4 percent. In terms of corporate dynamism, South Korea also fell behind, with the second lowest replacement rate of Industry 4.0 countries at 14.4 percent, followed only by Japan at 11.8 percent.

So what does South Korea need to do in order to become more competitive in Industry 4.0? The report suggests that diversifying across industries may help. Among the five major countries HRI looked at, South Korea had the highest concentration of sales in one industry: 19.8 percent of Industry 4.0-related sales were in the area of “technological hardware and equipment,” i.e. smartphones. Compare that to the United States’ 11.9 percent in software and services, or Germany and Japan, both with13.8 of sales in capital goods as their highest concentration areas.

Considering that much of South Korea’s 3D printing industry is related to the medical field, they may begin to surge ahead once they’ve fully sorted out standards and regulations for medical 3D printing. That’s still a work in progress, owing to how new the technology is combined with the stringent regulatory requirements for the medical industry in general. Overall, though, South Korea needs to better plan and prepare for the rapid changes happening in most industries. 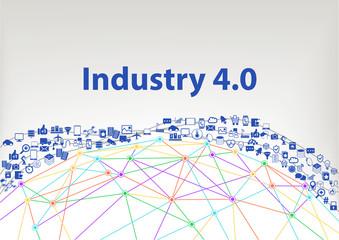 “Korean businesses need to develop the ability to forecast future changes with the fourth industrial revolution in mind when they set up mid to long-term visions and strategies,” said HRI research fellow Chung Min.

In terms of the overall impact of the growth of Industry 4.0, HRI predicted a mix of good and bad: production and distribution costs will be lowered, meaning higher income and better quality of life for workers in 4.0 fields, but on the flip side, there are the job losses resulting from replacing workers with machines – meaning, worryingly, that the rapidly shrinking middle class will continue to decline. Discuss further in the South Korea Not Prepared in 3D Printing forum over at 3DPB.com.