Data of the Napa, California earthquake.

There is nothing scarier than waking up in the middle of the night to your house shaking, and objects falling off of your shelves. Each year, there are literally hundreds of thousands of small earthquakes that strike worldwide. Of course, the majority of these are very small, and oftentimes just feel like a small train has rumbled down the road. However, there are also more dangerous, more intense earthquakes each year that cause billions of dollars in damage, and kill thousands of people. Some years, we get lucky and the death toll is minimal, but other years it’s in the tens of thousands, if not higher.

One morning, last month (August 24), residents of Napa, California, and surrounding areas, were awakened by one of their worst fears; an earthquake. The quake, which measured 6.0 on the Richter scale, struck at 3:20 AM local time, and was the largest to hit the San Francisco Bay area in the past 25 years. When all was said and done, there were an estimated 200 injuries, and damages are approaching the $1 billion mark.

For one man, named Doug McCune, when the terror of the earthquake hit, it not only startled him, but it also got him curious as to how this quake had compared to some of the other large quakes that have hit the San Francisco area in the past. He decided to utilize his knowledge of 3D printing to do what we believe has never been done before; 3D print an earthquake. 3D Model that McCune created of the Napa, California quake.

“I was curious to understand how the shaking that woke me up compared to the larger earthquakes that hit San Francisco in 1989 and 1906,” McCune told 3DPrint.com. “The USGS has the data collected from the 1989 quake and has also produced a model of what they think the shaking would have been like back in 1906. So we have comparable data for all three quakes, so I thought that getting 3D prints of all three to look at side by side would be a good way for me to understand how the earthquakes differed.” McCune, who works for a startup, called SpatialKey, which creates mapping software for the insurance industry, tells us that a big portion of what they do involves mapping the impact of various natural disasters. This means that mapping earthquakes is something that they fairly often take part in. He had been interested in earthquake data that the USGS creates for quite some time, and in fact had created a laser cut map of the 2010 Haiti earthquake in the past.

When McCune was awakened by the earthquake in the middle of the night, he almost instantly decided to downloaded and play with the USGS data of the Napa earthquake. In fact he downloaded the data only minutes after the quake had struck. He then used a custom software package that he had written, to convert the data from a 2D map into a 3D model, which was suitable for 3D printing.

“So my workflow involves grabbing the source data from USGS, which is polygons showing how intense the shaking was at different points on the map, then processing that data with GIS software, and finally running it through my own software to convert it to a 3D model, based on that shaking intensity,” McCune told us. “Then of course that model gets printed on the 3D printer I have in my garage.” 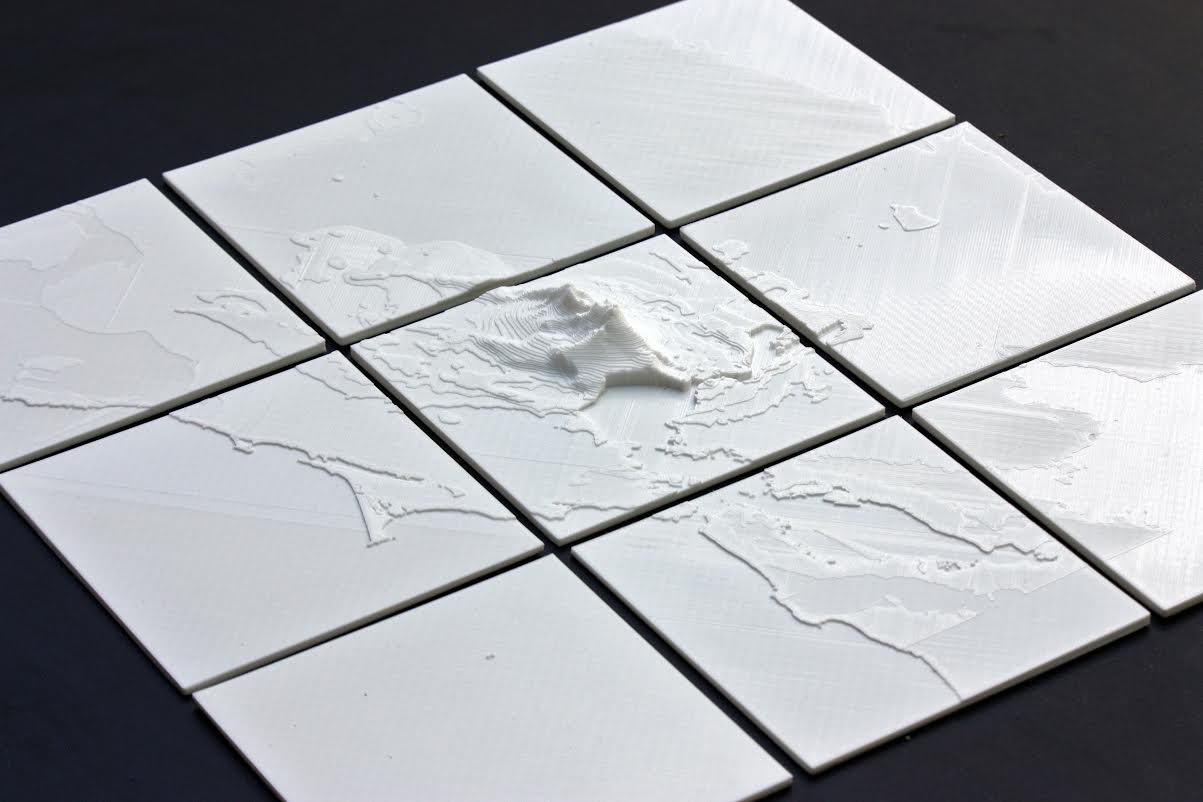 The completed 9-panel 3D print of the Napa earthquake.

That 3D printer is an Afinia Series H, which is one of the more popular high quality consumer level FDM based machines on the market. While the build volume on the Afinia is a bit small, the quality of prints are very high. “I printed the quake in 9 tiled sections,” he told us. “I was going to originally try to glue and paint them together, but ended up instead opting to allow the tiled nature to show through. I think the way I’m going to end up framing this is to keep the gaps between the tiles like I did in these photos.” As you can see in the photos, the earthquake 3D prints came out quite nicely. They would make for some tremendous artwork for anyone interested in the study of geology, or just someone who has experienced this tremendous quake, first-hand.

McCune isn’t done yet though. He hopes to 3D print other earthquakes as well, such as the 1989 San Francisco quake, and the infamous earthquake of 1906. He would then like to compare the map data shown on all of these 3D printed models to get a clear view of just how intense of a quake he had really experienced.

He has also made the software needed to convert the USGS data as well as other 2-dimension maps into 3D printable models available on his GitHub page.

McCune is currently preparing for a gallery art show that he’ll be doing in Portland, Oregon in April of 2015, at the Diode Gallery for Electronic Art. “So these earthquake maps will likely make an appearance there, along with a lot of other 3D printed and laser cut data visualizations,” he explained. “And then other than a brief stint in a gallery, they’ll probably just hang on a wall in my house until I need to make space for new stuff.”

What do you think of these unique 3D printed maps? Discuss in the 3D printed earthquake map forum thread on 3DPB.com.