While much research and development is centered around making 3D printed items, from human organs to houses—in all of its wonder—this technology is also extremely useful just in the process of R&D as well. Tom Dumoulin, a pro bicycle racer from the Netherlands, discovered this for himself recently as a team of designers turned their focus on him, 3D scanning him from head to toe. That’s absolute dedication when it comes to testing out roadwear, but the team at TU Delft was serious about making sure Dumoulin’s body suit did not slow him down in any way, and especially during his recent Tour de France time trial.

We think it’s safe to say that while they wished him well in the time trials and race, they also really enjoyed the project in itself, as the university team came as close as humanly possible in imitating the cyclist’s form in creating a 3D printed mannequin. This allowed them to thoroughly experiment with how aerodynamics would affect his suit. But how did they test all that out? Oh, in their own wind tunnel, of course! While that might sound a bit extreme, as a group of athletes, many in absolutely perfect shape, strive to finish first—often the only thing that might make the difference is in aerodynamics. And the skinsuit can play a part; for example, imagine if you were out clodding around in the race wearing cotton khakis and a sturdy tee, sporting cotton socks and heavy shoes. These athletes obviously want the opposite.

The idea is to refine the clothing to very little, and to make it help the cause if at all possible. Posture on the bike plays a large part in this, but the skinsuit can be important enough, and that motivated both Team Giant-Alpecin and the university to collaborate on Dumoulin’s behalf, keeping in mind that in the Giro d’Italia, Dumoulin and the runner up were only showing a difference of twenty two thousandths of a second.

“It’s split seconds that count in cycling, especially during a time trial, so if a faster suit can deliver only a small improvement, this can still make the difference,” says Tom Dumoulin. And because the researchers needed a lot of time with Dumoulin to experiment, they came as close to cloning him as they could.

“It took several steps to make the suit more aerodynamic. First, Dumoulin’s body was accurately scanned. Next, using this data, a precise, full-size mannequin of his body was 3D printed. This mannequin was then used to take measurements with different suits and materials in the TU Delft wind tunnel,” said Dr. Daan Bregman of the TU Delft Sports Engineering Institute.

The process of making the mannequin was rather enveloping to begin with, before they even got to the testing portion.

“Step one in this process is the accurate scanning of the cyclist. We outsourced this task to a specialized company  – th3rd – who use a photogrammetric method,” said Dr. Jouke Verlinden of the Faculty of Industrial Design Engineering at the TU Delft. “In short, we used 150 DSLR cameras to take a lot of pictures of the body from many different angles, all at the same time. Tom Dumoulin was ready in 30 minutes or so, but for us, the work had only just started.”

“As a result of all those digital images, we were left with huge amounts of data. It’s key to use the data correctly, for example by splitting up the files in a smart way: the so-called 3D segmenting. You should also determine where the accuracy of the scan and the resulting print is somewhat less important. In those areas you can strongly reduce the amount of data you need. If you aim to make a model that is accurate to the micrometre throughout, you’ll end up spending way too much time printing the mannequin.” 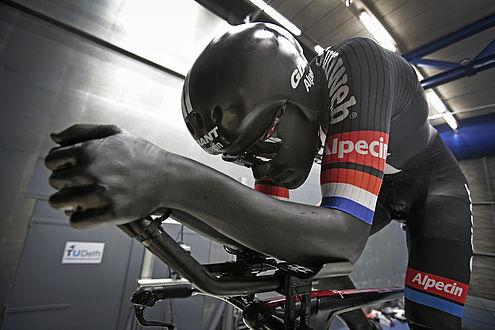 Considering the amount of trouble the researchers had to go to, along with the time set aside to experiment, one gains a perspective on how important the slightest second is in during the race, and especially in relevance to the racing gear and clothing. Once the team surpassed a pretty complex 3D scanning process, it was time to take on 3D printing—and it would seem that the creation of the mannequin began to take on a life of its own, aside from the race and aerodynamics, with Dr. Verlinden noting:

“3D printing is getting increasingly accurate and cheap and thus more attainable. We actually use a fairly standard 3D printer, albeit one that can print relatively quickly. With a relatively simple adjustment, the printer can now reach up to 2 metres high. It took us about 50 hours to print the mannequin up to 20 micrometres precise. The method we used is called Fused Deposition Modelling, in which the model is built up in plastic layer-by-layer.”

The mannequin was printed in eight parts, using several different 3D printers at once. Consideration had to be made for realistic posture, movement, and a body that could easily be changed into other suits.

“The eight parts are attached to one another via simple pin-and-hole joints,” said Dr. Verlinden.

Once that step was finished, Dumoulin’s 3D printed twin body was sent to Wouter Terra, a PhD-student at the Faculty of Aerospace Engineering at the TU Delft, who measured the mannequin in the tunnel and tried out numerous styles of skinsuits with a variety of materials.

“You would expect a smoother fabric to induce less drag,” said Terra. “But this isn’t always the case – especially when looking at the airflow around a rounded blunt, non-streamlined shape, like the body of a cyclist. Why does a ridged surface perform better in certain areas? In short, it boils down to this: drag is built up out of two components. First, the drag through friction and second, the drag through pressure.”

“Through the roughness of the ribbed pattern, the drag through friction will increase, but the drag through pressure can drastically drop. The net drag will then decrease. An inventive combination of rough and smooth spots on the suit might only result in a decrease in drag of half a percent, but this could potentially deliver those precious seconds that make the difference between winning or being in the top 10.”

Teun van Erp, a scientific expert for Team Giant-Alpecin, verifies that indeed the suit’s fabric could have a ‘significant influence.’ Not only that, he points out that while of course this was a great amount of effort to go to for one suit, it does have great psychological influence on the cyclist too, adding confidence.

They moved ahead by testing fabrics from the team’s’ clothing supplier, Etxeondo, in the wind tunnel and using a cylinder. Terra states that a cylinder shape was sufficient at that point in the experiment because it is fairly similar to the shapes of arms and legs.

“This provided us with a good insight on the fabrics we could best use for the various body parts,” said Terra.

After that, they moved on to the next phase of creating several different suits with the ‘best-performing’ fabrics and a variety of textures. Once those were ready, they were actually tested on the mannequin in the tunnel. There, things got even more complex—and that’s not surprising if you stop to wonder how they were planning to calculate success with the riding apparel. Using PIV (Particle Image Velocimetry), they were able to analyze the movement of small particles within the airflow, and then gain an understanding of the current.

“To research on the scale of a cyclist,” said Terra, “we added an innovative technique to this method; helium-filled soap bubbles were used to map the current and ensure good measurements.” You may have heard the old adage that to journey is often a better thing even than to arrive, and it would seem the researchers and team members involved felt that way as they learned so much along the way and were able to delve into new technology and processes.

Dr. Bregman pointed out that they aim to use their scientific knowledge for use in many different areas of sports. Cycling became an interest as they met members from Team Giant-Alpecin and found that they were interested not just in improving performance further, but also in shedding more scientific light on the sport, and how performances can be affected. Team Giant-Alpecin and the TU Delft will continue to collaborate.

“The beauty of this project lies in the interdisciplinary nature of it. Without all the knowledge from various disciplines, we would have never been able to execute it so well,” says Dr. Bregman.

And, as Tom Dumoulin was the time-trial winner (coming out over a minute ahead of his competitors) on July 15th, it looks as if the journey was a smashing success too, with the mannequin playing his part very well ahead of time. Tell us your thoughts on the great lengths the team went to here over in the 3D Printed Mannequin for Cycling Suit Research forum at 3DPB.com.