Most people, if asked if they’d rather lose a few fingers or an entire hand or arm, would think the answer should be obvious. The less lost the better, right? However, those who lose only their fingers may actually have a more difficult time. It’s easier to fabricate and fit a prosthetic hand or arm than it is to craft a prosthesis to replace a partial finger amputation like the one suffered by Rajesh Ojha, a mechanic who lost four of the fingers on his left hand due to an accident on the job in August of 2015. Because of the nature of the amputation – three fingers were removed completely, plus half of his thumb – fitting a functional prosthesis proved to be rather complicated. It’s relatively simple to replace a hand that has been completely removed, but an uneven injury like Ojha’s presents a challenge.

“Patients who lose an entire palm or a hand were still able to get silicon based prosthesis,” said Dr. Mukesh Doshi, a prosthetics and orthotics specialist and owner of POCL Medical Solutions. “However, for those with partial amputation of fingers or amputations ahead of the joint, there were no options available. I was looking for a patient who would be ready to work with us in an experiment to create such a prosthesis.” Dr. Doshi had read about Anatomiz3D Healthcare, the healthcare division of Sahas Softech, and believed that their expertise in medical 3D printing might be able to help Ojha. While Anatomiz3D has produced many 3D printed surgical and educational models, they had never ventured into prosthetics, but when they heard about Ojha’s case they were willing to give it a try. They asked Dr. Doshi to send them a cast of Ohja’s hand, at which point they decided that a modification of the open source Flexy-Hand 2 from Gyrobot Ltd. would be the best option.

“The process worked in four parts: scanning the POP cast, modifying the prosthesis (in this case: Flexy hand 2) based on the scan of the patient using exact measurements, 3D printing of the parts and then assembling of the same,” said Firoza Kothari, head of Anatomiz3D Healthcare. “While the entire process was supposed to be feasible, it actually didn’t work out well the first time.” 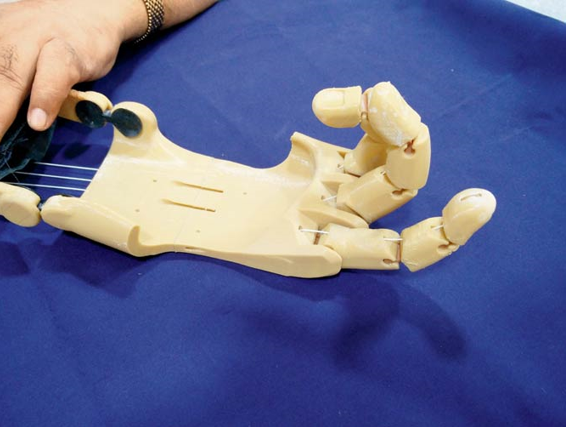 The first device didn’t fit properly, so it was returned to Anatomiz3D for a second attempt. Despite the long-distance nature of the collaboration, the final device was completed in about a month’s time. The prosthetic, which attaches to Ohja’s hand with strings and straps, is surprisingly simple, and allows him the flexibility that other partial hand prostheses lack.

“With practice he will be able to hold, throw, write and do all kinds of light work using the hand,” said Dr. Doshi. “The design is actually so simple that it works on strings which are attached to the wrist, as he moves the wrists; he will even be able to close his fingers into a fist.”

Just a few days ago, Ohja was able to pick up a pen for the first time since the accident. He has returned to work, and while he has only been doing light work so far, he says that he will be taking on more soon. He is very pleased with his new hand, calling it a “wonderful experiment.” Meanwhile, Anatomiz3D has officially added prosthetics as one of their standard services. After successfully taking on such a challenging case in just their first attempt at a prosthetic device, it certainly won’t be their last. Do you know someone who could benefit from such a device? Discuss in the 3D Printed Hand Prosthetic forum over at 3DPB.com.