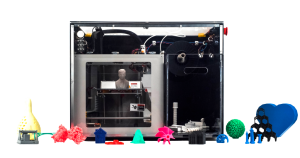 Boston-based 3D printing technology manufacturer NVBOTS knows a little bit about pushing the envelope of what a 3D printer can do. Their first 3D printer, the NVPro, is a fast, high-quality FFF desktop printer that can be completely automated thanks to a print removal system and the ability to be controlled entirely from the cloud. It was developed primarily for schools or high-output office environments and can be left alone to print 24 hours a day. But building an advanced desktop 3D printer was only step one for the company; their goal has always been to create easy-to-use, fast and accurate industrial 3D printing technology. “At our core, NVBOTS is driven to turn ideas into realities, challenge the status quo and deliver on the impossible. Through the introduction of our ultra-high speed, multi-metal 3D printing technology, we are doing just that. And not only are we disrupting the 3D printing industry, we are solving the toughest problems in additional markets, such as the metal castings sector, which will have a significant impact on medical, automotive and aerospace industries, among others,” explained NVBOTS CEO AJ Perez.

According to NVLABS, their new metal 3D printing technology will potentially work with virtually any metal material, will be capable of using multiple metals throughout the entire build and will produce finished parts up to ten times faster than SLS. Entire car frames could be 3D printed as one piece.

“NVBOTS is breaking entirely new ground by bringing together a powerful combination of patented technology, with a level of 3D printing and metallurgy expertise unmatched in the industry. Any company prioritizing on the ability to cost-effectively manufacture and scale will benefit from being part of the NVLABS Alpha Program,” says Chief Research Officer at NVLABS, Paul Burke.

The new NVBOTS technology could have huge and transformative effects on the manufacturing industry. Because the system allows for the use of multiple materials throughout the fabrication process, large-scale parts can be made in a single piece rather than in separate parts that would need to be assembled. If worked into the workflow of a car assembly line for instance, an entire vehicle chassis can be assembled at the same time with different metals in different areas depending on the structural requirements. Essentially, a process that typically takes days or even weeks can be done in a fraction of the time, often at less of a cost.

The process is expected to be a high speed alternative to SLS 3D printing, and could have a huge impact on the medical, automotive and aerospace industries. The process will also allow engineering teams to speed up the testing phase, give them the freedom to create designs not possible with traditional manufacturing and assembly methods and move into the production phase faster. If you’re a manufacturer looking to incorporate high-speed metal 3D printing into your business you can apply to be enrolled in the NVLABS Alpha program here. What do you think of this new technology? Discuss in the NVBOT Multi-Metal 3D Printer forum over at 3DPB.com.

By sending this form, you consent to share its content with Aniwaa and its trusted partners.
<script type='text/javascript' src='https://3dprint.com/wp-includes/js/