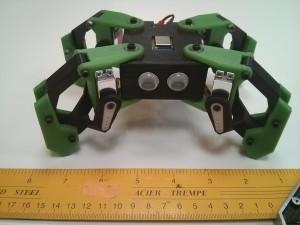 Kame is small, but packed full of great features.

While there had been industrial 3D printers available years before desktop printers started to become popular, it wasn’t an especially widely used or known technology. But when the first RepRap 3D printer found its way into a makerspace, 3D printing exploded and primarily became known as a hobby industry. The market overwhelmingly sold its smaller and cheaper desktop printers to makers and artists who used them to make some really impressive things, and that hobby market is what drove 3D printing to national awareness. This past year has seen the hobby market shrink slightly as more businesses start to invest in 3D printers, which has shifted the media’s focus onto the rapidly expanding industrial and manufacturing applications. These days I see so much news about the shifting focus of the industry that it’s always great when I find a project that reminds how fun it can be to 3D print something just for fun. This adorable four-legged robotics project from robotics engineer and Hackaday user Javier Isabel is a perfect example of how 3D printing has completely changed the rules when it comes to experimenting with technology like robotics. Kame is a compact little quadruped robot that can skitter across the floor or leap in the air on his remarkably nimble four legs that are powered by eight independent servos.

Other than the electronics, Kame is entirely made from 3D printed PLA parts, including his legs, joints and body. Thanks to each leg having two servos, he has eight degrees of movement that allow them to act as a parallelogram mechanism which gives his movements a more natural feel than the herky-jerky movements of most robots. The legs were designed so that there is plenty of room in the joints for a real metal ball bearing. Isabel mentions that 3D printable bushings could have been used as well, however the rotational movements wouldn’t have been as smooth, and they would likely wear out rather quickly. A face only a maker could love.

It’s strange, and it probably says a lot about humans and how easily we anthropomorphize things, that all that Isabel had to do to make Kame cute was add a pair of googly eyes to him. Certainly his squee-inducing tap dancing and leaping add to that, but it really is the eyes that sell it. All you need to do is take a look at Kame jumping around on Isabel’s desk, how could you not love the little guy?

Isabel started his Kame project in order to study different gaits, as well as the algorithms that will enable robots to use them. Kame’s movements are powered by Arduino, and it is controlled with a Wi-Fi enabled controller board. The entire thing is powered by a two cell, rechargeable lithium polymer (LiPo) battery. The high speed servos that Isabel chose for Kame are what give him the ability to leap and dance. They also happen to work at either 4 or 7 volts so they can be plugged into the LiPo battery without the need of a converter. A close up look at kame.

The entire project is entirely open source so it is a great educational project that is suitable for schools or for anyone new to 3D printing and programming. The robot’s design was created in FreeCAD, and all of its components were 3D printed on an open source 3D printer. If you want to build your own or you’re an educator who would like to use this as a project in your class, all of the Kame files can be downloaded from GitHub or Thingiverse for free. Discuss this great project in the 3D Printed Quadruped Robot forum over at 3DPB.com.

Here is some more video of Kame out for a stroll: