Don’t give up on Nessie just yet. Just because there has been absolutely no proof that she is real and all human capacity for reasoning denies the probability of her existence hasn’t stopped a lot of people from harboring secret hopes that she’s out there (even if it’s just because we imagine that she might one day eat someone like Donald Trump or one of the Kardashians). The recent discovery of a nearly 900-foot-deep trench at the bottom of Loch Ness now shows us just the kind of place a large, elusive beast could retreat to when the spotlight gets too bright and could explain why she’s never been cornered and properly photographed.

The camera-shy colossus has been the subject of myths for as long as people have inhabiting the area and with the invention of photography, many held hope that it would finally be documented, exonerating those claiming to have seen it from accusations of speaking falsehoods. The most famous photograph purporting to show the titan is a 1934 image which looks curiously like a plastic brontosaurus floating in a pond. This isn’t surprising, since this was exactly what it was revealed to be by one of the men who took part in staging the image (though he didn’t have the courage to make the truth known until he was on his death bed). 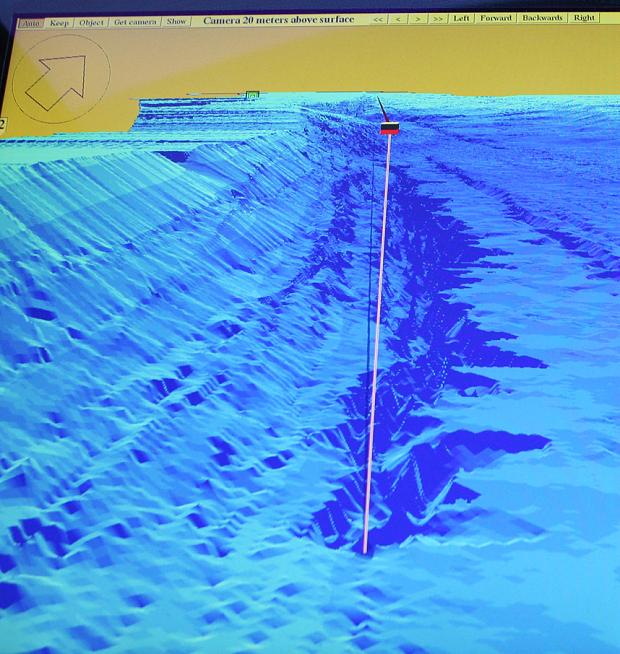 This latest ray of hope for Nessie’s existence has been offered by data gathered by Keith Stewart, the skipper of a tourist sightseeing boat equipped with sonar. It’s not just the existence of the trench that has Stewart wondering about the monster, as he noted:

“I wasn’t really a believer of the monster beforehand, but two weeks ago, I got a sonar image of what looked like a long object with a hump lying at the bottom. It wasn’t there when I scanned the loch bed later. That intrigued me and then I found this dark shape about half way between the Clansman Hotel and Drumnadrochit which transpired to be a crevice or trench. I measured it with our state of the art 3D equipment at 889 feet, which is 77 feet deeper than the previous recorded deepest point called Edward’s Deep.”

This crevice has been nicknamed Keith’s Abyss and Stewart explains that it may have been overlooked in previous searches because of its relative proximity to the shore. He also posits that this may lend credence to tales of underground caves and waterways that connect Loch Ness to other lakes…potentially providing an opportunity for hiding something as big as Nessie and her whole family. Those who have been awaiting some new evidence supporting any glimmer of hope for Nessie’s existence, no matter how tangential, are quite excited about the discovery of this hidden recess. Others are quick to point out that the company for which Stewart works is just one of many that benefits greatly from the local tourism — estimated at £25 million annually — that the monster draws. The leader of the scientific research organization The Loch Ness Project, Adrian Shine, is currently underwhelmed by the sonar results:

“I would be cautious [about Mr. Stewart’s findings] because there is an anomaly which occurs with sonar readings taken close to the side walls called lobe echoes, which can give misleading results about the depth. It doesn’t matter how sophisticated your sonar equipment is, you can still get this anomaly.”

That’s not enough to dampen the spirits of die-hard Nessie fans and will most likely set off another frenzy of searches…and, of course, more visits than ever to the storied location. Discuss your thoughts on this new technology in the 3D Imaging in Loch Ness forum over at 3DPB.com.