SOLIDWORKS 2016 Will Feature a Bunch of New 3D Printing Upgrades

Last week Dassault Systèmes released all of the details for what they have in store for their popular SOLIDWORKS CAD and CAE program for 2016. As Dassault Systèmes’ most popular software package, by far, it looks like SOLIDWORKS will be finally focusing more on 3D printing by adding a bunch of new tools to help streamline the design to 3D printer workflow. And SOLIDWORKS will also be getting a newly designed interface optimized for high resolution displays, including new, simplified and updated icons. In an effort to simplify the entire design process that new interface will work for all of their tools. That means no jumping around to use different features because they will finally be all in the same place.

It looks like the new SOLIDWORKS is being primed to evolve beyond being a simple CAD program and transform itself into what they call an “innovation platform.” While that sounds like a nice marketing buzzword, and it is, it does look like the program is trying very hard to add more easily accessible features without having to divide them up into different apps or overpower the user with hundreds of buttons and tabs. The toolbars have been simplified significantly as well; rather than a massive tool bar, smaller object, tool, app or project specific toolbars will pop up with relevant tools, only when needed, rather than requiring the user to hunt for the right tool through endless menus. 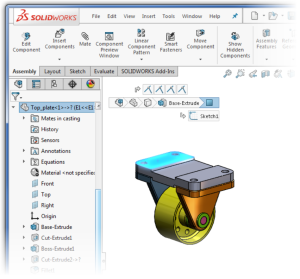 Dassault Systèmes also included a robust upgrade to its simulation tools, which hopefully will eliminate the need to use multiple programs for a single project. Additionally, they included a new TreeHouse tool that is a simple to use components management feature, as well as an Inspection tool that can allow users to create checkboxes directly within Solidworks that will flow right along with the digital part into the factory where they can verify the parts as they are made. SOLIDWORKS 2016 will also include a cloud-based file management feature called Conceptual Design and the Visualize feature which generates high quality textures and renders. When it comes to 3D printing SOLIDWORKS has always been playing a bit of catch-up, but they have finally integrated several new tools that treat 3D printing as an important part of the workflow. For Windows 8.1 through 10 users there is a new tool that allows the 3D printer batch to be pre-visualized, including the ability to see how the striation on the model will look before it’s printed. They are also including the ability to display any parts of an object that requires the inclusion of support material. For the users of any OS, SOLIDWORKS can now analyze the minimal thickness required of the part, offer slack checking for connective parts and a cost evaluation tool so parts can be optimized to cost as little as possible in material and printing fees.

SOLIDWORKS seems to be maintaining its powerful CAD design tools, but is trying to be more adaptable and inclusive of various types of workflows, including 3D printers. It also looks like Dassault Systèmes is trying to make the program easier to use by including intuitive UI and hopefully eliminate the steep learning curve of previous generations of SOLIDWORKS. You can take a look at all of the new features here.

Have you tested out the new SOLIDWORKS?  Let us know in the SOLIDWORKS 2016 forum thread on 3DPB.com.