League of Legends (LoL) is a multiplayer online video game that was originally released back in October of 2009. Developed by Riot Games, it has become one of the most popular free-to-play online battle arena games ever created. In a given day, close to 30 million people play the game, so undoubtedly there is something to it, right? For one man, who we have covered several times in the past, named Simone Fontana, he thoroughly enjoys the mechanics of the game as well as the tremendous fun factor. When Fontana, who recently gave up his day job to become a 3D designer, saw a new character being released for the game, it ignited his creative passion.

“I saw a new character was coming out, and after seeing the trailer I really liked the sword from Ekko, so I decided to replicate it on a 3D printer,” Fontana tells 3DPrint.com.

Fontana spent about 2 days modeling and designing a replica of the Ekko sword, before first 3D printing a small, scaled-down version of the weapon, one that measured 30cm (approximately 1 foot) in length. Once this was complete, he decided to create a larger, more full-scale version, one which would measure an incredible 1170mm (approximately 4 feet) long. 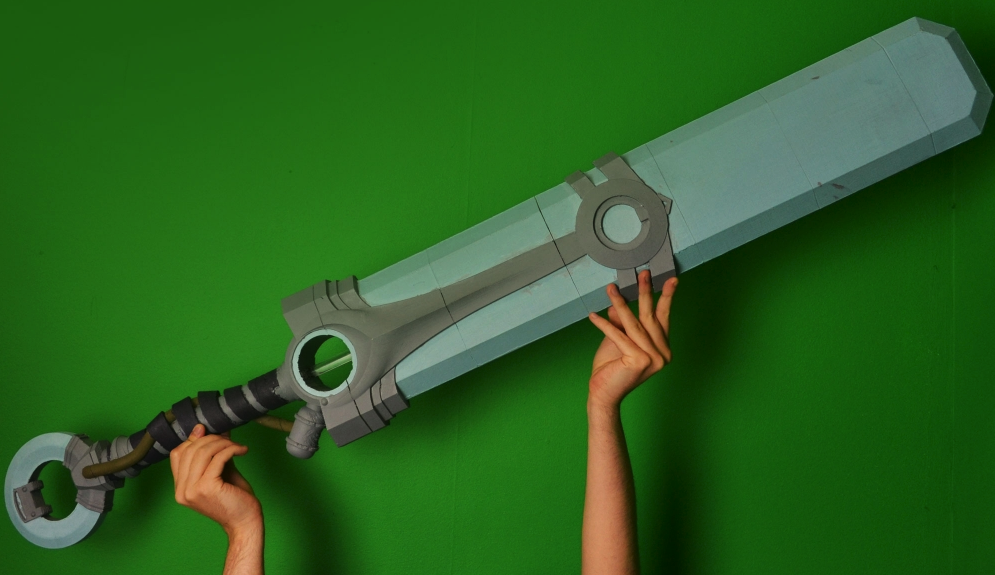 The large, life-size sword was 3D printed in 10 separate pieces, all of which have heights ranging between 10cm and 13cm. This makes it 3D printable on virtually any desktop 3D printer. Once printed out, the sword required some additional parts to provide it with strength, as well as some post processing to make it look more realistic (as seen in video below). The final product ended up using about 730 grams of filament and took approximately 70 hours of print time to complete.

“I put 4 steel rods inside and one acrylic tube so it could be more resistant,” Fontana tells us. “After binding the sword together, I used some white and black primer and acrylic paint to better replicate the sword you see in the game.” Next, Fontana says he may add some LED lights to the sword, giving it a unique glow. That would require him to sit down and modify the design and experiment with different translucent filaments. He has made the design files for this HUGE Ekko Sword available for free download on MyMiniFactory, where he is also selling his already 3D printed and assembled version for $299.00.

What do you think about this larger than life creation? Does it look like the Ekko Sword from League of Legends? Would you have designed it or painted it differently? Discuss in the 3D Printed Ekko Sword forum thread on 3DPB.com. Check out the video below.