When you think about the big names within the desktop 3D printing industry, the two that stick out the most are MakerBot and Ultimaker. While MakerBot originated in the United States, they still have the largest presence on this side of the pond. However, when it comes to Europe, no company has led the market in the same way that Ultimaker has. Ultimaker is known for their high-quality quality FFF-based desktop 3D printers, which have gradually evolved as technology has improved.

For one software architect from Austin, Texas, named Jason, owning a 3D printer simply wasn’t enough. Having first gotten into the 3D printing scene back in 2011 after seeing the MakerBot Thing-o-Matic 3D printer appear on ‘The Colbert Report’, Jason has since become quite the expert with these machines. He has built a few 3D printers, and owns several FFF- and SLA-based machines.

For the past 4 months though, Jason has been working on a project that is really quite unique. He has been building what he calls an ‘Ultimaker 2 Aluminum Extrusion’ 3D printer.

“It started with a desire to learn new CAD software — AutoDesk’s Fusion 360,” Jason tells 3DPrint.com. “I’ve had several other printers and the Ultimaker 2 has been the most reliable and enjoyable printer I’ve owned. Ultimaker’s github had the entire printer in CAD form. I downloaded and imported it into Fusion 360. I realized that by adding an aluminum frame with 3D printed parts to hold everything together, I could have a printer that shared the same gantry/drive system as the UM2. It wasn’t until looking around on sites like eBay and AliExpress, that I realized all the parts were available.” He set out to create a 3D printer which would give him the same printing experience as the original Ultimaker 2 does. He ordered 20 x 20 inch aluminum extrusions from Misumi USA, as well as many other parts form China. He 3D printed 33 unique pieces himself, many of which are printed more than once because multiples are required in the design.

The biggest differences in Jason’s aluminum built 3D printer when compared to the original Ultimaker 2 is the fact that it utilizes aluminum extrusions for its frame.

“The aluminum extrusion design, in no way follows the traditional Ultimaker 2 frame, which makes for a simpler design and easier assembly,” Jason tells us. “My design requires bolting a fair amount of 3D printed parts to accomplish the same support system. The parts, direct from China, are not official Ultimaker parts. Does this matter? I sort of feel the community is mixed on this one.”

Jason’s version also doesn’t feature the “fancy glowing knob” that the Ultimaker normally comes with, nor does it have an enclosed frame. With all due respect to Ultimaker and their tremendous product, you have to admit that Jason’s version definitely is more aesthetically pleasing. Perhaps it’s the high-quality look that the aluminum extrusions provide, or maybe just the fact that it is a completely new look for an Ultimaker. 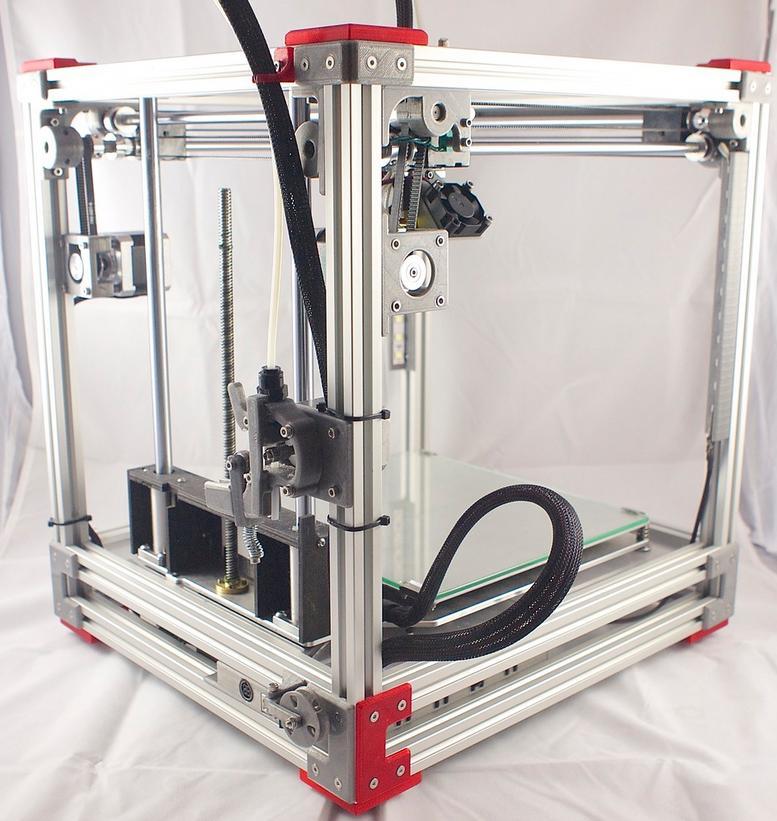 Jason does tell us that his 3D printer can print using the exact GCode files that the traditional Ultimaker 2 uses, and it provides identical results when doing so. “I used my real UM2 to print a file and used the print to dial-in the new printer until I was getting identical results,” he explains.

The internal aspects of the printer are purely an Ultimaker design. This includes the entire gantry/drive system.

“I took an ‘If it ain’t broke, don’t fix it’ approach,” Jason tells us. “My only goal was to end up with a printer that gave the same UM2 experience. I’ve been able to heavily lean on Ultimaker for all their hard work, since, with the exception of the frame, the remaining printer build is 100% UM2. Once I had the frame figured out the rest of my build was pretty easy. The team at Ultimaker already has the full assembly of the UM2 as a PDF with pictures and text. I got out of 95% of the hard work!”

Jason tells us that he knew that no one would have ever wanted to build this 3D printer if he had not provided instructions on putting it together, so this is exactly what he did. The instructions include photos and diagrams for each part, along with full text instructions for assembly. All of this, along with the STL files for the 3D printed parts, can be found on Thingiverse. It should be interesting to see if anyone downloads the files and creates their own Aluminum Extrusion Ultimaker 2. What do you think of Jason’s creation? Do you like the design? Discuss in the Ultimaker 2 Aluminum Extrusion 3D Printer forum thread on 3DPB.com. Check out the video of the 3D printer in action below.