Carlo Franciscone, an Italian engineer from Novara, has done a redesign of the mechanical parts used to build a wall-mounted Polar Drawbot based on work he’s seen by others on the web, and the result is one of those “take my money” items.

In case you’re not familiar with the concept, a Polar Drawbot is a polargraph mural drawing robot intended to teach students about programming, physics, trigonometry, and electronics. The Makelangelo iteration of the device is essentially an “art robot” which hangs on a vertical surface and, with nearly the same technology as a 3D printer, uses a pen holder, software, steppers, and motor mounts to trace out an image of your choosing. Software converts PNG, JPG, BMP, and GIF images to the instructions to draw the finished product, and as an added bonus, includessupport for DXF files. Franciscone says the electronics and firmware come from the Makelangelo project using version V1 of the Adafruit motor shield, he used a DK Electronics motor shield for his project. As for Makelangelo, it’s also scalable and the project team say test models have ranged from being capable of drawings from 30cm2 to 300cm2.

After several test trials using parts he had close at hand, Franciscone found that none seemed to match his requirements closely enough for his taste, so he began to completely redesign each and every part to put his personal stamp on the device. Franciscone says the testing revealed he would need three separate types of pulleys: one used for smooth cords and the others to take on the task of moving the power through a synchronous transmission he made with ball chains.

He says that while the various chains can be used interchangeably, the pulley diameters in the machine setup must be changed as well to avoid results which mess up the aspect ratio of the finished drawings. As a counterweight, Franciscone used a “D” type battery past it’s prime and a holder he made to to hang it.

He says his parts were inspired, to a large extent, by work done on a similar project by fellow Thingiverse user Kongorilla. You can see Kongorilla’s photos of the project, as well as a whole bunch of very cool other projects, on his Flickr photo stream.

And by all means, check out this interview with Dan Royer of Marginally Clever below.

Can you see yourself building this Polar Drawbot based on the Makelangelo version by Dan Royer? Let us know in the Polar Drawbot forum thread on 3DPB.com. Check out the video below showing the drawbot in action. 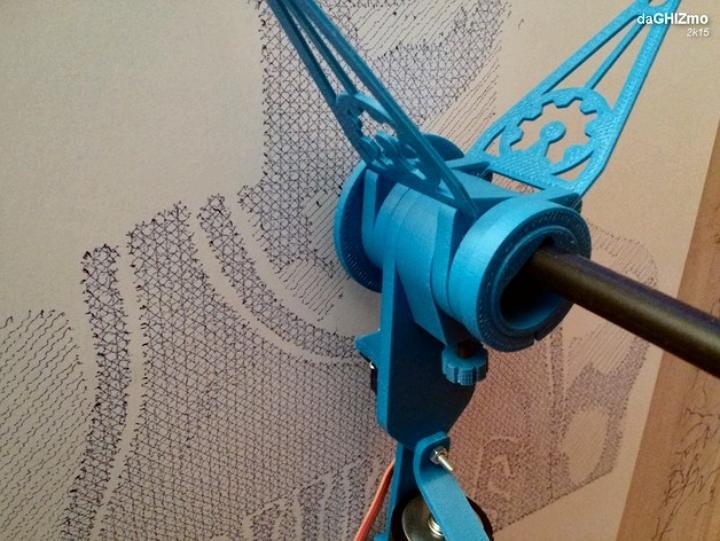