UK artist Elizabeth Gossling recently opened an exhibition at the Tintype Gallery in London. The show, titled “Burn,” features eerie, 3D printed images of the father of the “telesnap” (or “tele-snap”), John Cura, his camera, and an assortment of early television sets, the sources of Cura’s photographic output. A telesnap from the coronation of Queen Elizabeth II in 1953

Telesnaps are off-screen photos, still images “snapped” of broadcasts on BritishTV in half of a normal frame of 35mm film. Cura, heir inventor, made a business of selling his telesnaps between 1947 and 1968, primarily to directors and actors captured in the 250,000 photographs he took with a modified camera. After his death, the BBC declined to include his telesnaps in their collection and his wife is alleged to have burned all but a few of them in response to the refusal.

While the title of the exhibition most directly refers to the probable destruction of the Cura collection, other significant allusions are perhaps more profound despite their subtlety. According to Gossling, “Burn” also refers to the sets themselves.

“BURN as the show’s title,” Gossling said, “refers not only to the alleged combustion of Cura’s archive but also embraces the history of the televisions boxes themselves with pre and early post war sets nicknamed as widow makers and curtain burners because of their volatility the title also plays with the idea of visual consumption from our glowing screens and the process of burning as an outmoded means of recording digital data.” The pictures that Cura captured–the predecessors, one might argue, of the modern screenshot–were fragments from fluid but, of course, ephemeral broadcasts. One of Gossling’s works, titled Cura Obscura (the “Obscura” being a reference to the early camera obscura), depicts Cura fusing with his camera. He is doubled, both crouching to peer into his viewfinder, and standing, reaching up to rub his fatigued eyes. The legs of the tripod are molten, liquifying.

In the work Gossling called Skin Graft, Cura’s face appears solid, then transitions to a grid-like texture that is reminiscent of pixels or, from a bygone era of print publication, a photogravure. Finally, the front of the face runs viscously into the camera, which seems to be melting, fusing with Cura’s flesh.

Gossling’s captivating images were produced with the help of London-based 3D scanning and printing company my3Dtwin. The company specializes in creating full-body 3D scans of people and 3D printing miniature portraits. She used a male model for the figure of Cura and located five television sets from the photographer’s era for the 3D scans. 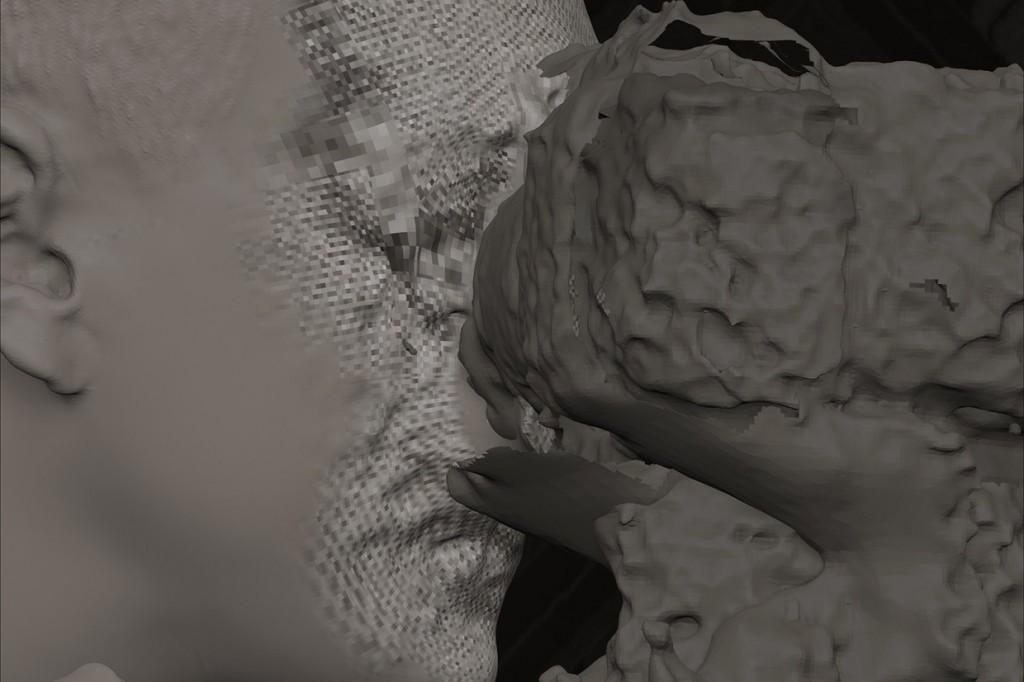 The melting effect seen in Gossling’s works was either accident or serendipity depending upon your perspective as the machines–multiple DSLR cameras–were unable to generate complete scans of the reflective surfaces such as the metal of the tripod, Cura’s camera, and the television screens. Gossling referred to the effect as an “ashy aesthetic,” which is entirely appropriate given the theme.

Critic John Dummet remarked on this convergence of devices used in the various photographic and broadcast techniques in Gossling’s work:

“In each of her prints and in the process underpinning them, a stress is placed upon the apparatus involved in their realisation. It is only in the assemblage of John Cura melting into his camera, the burned out screens of the televisions sets and in the glitchy surface of the tripods that the actual image inhabiting Gossling’s work partially appears. This singular but tantalisingly elusive image enveloping her work situates the embodied subject as an optical chamber, irrevocably caught up in a machinic assemblage. It is this connective assemblage of body, camera, tripod, 3D scanning processes and digital printing that constitutes the image.” Thus, a very likely unforeseen relationship developed between the older technology, the photographer’s telesnap technique, and the 3D technology that, not unlike Cura’s, gave form to something as ephemeral as an idea or a television broadcast.

“Burn” is on exhibit at London’s Tintype Gallery through May 9th. What other artists do you know of who have fused older and newer technologies? Will you be able to see this exhibit in London? Let us know in the Elizabeth Gossling 3D Printed Telesnap Exhibit forum thread over at 3DPB.com.