There is something about colorful lights that can gain the attention of just about anyone. Whether it is one of those fluorescent lights you are used to seeing at your neighborhood bar, a street light turning from green to yellow to red, or Christmas lights that brighten the holiday spirit, there is no denying the fact that colorful lighting is an attention grabber.

For one French student, Charewicz Thomas, who goes by the pseudonym MrFox, 3D printing provided a way to create unique, decorative LED lit signs, unlike anything we have seen 3D printed previously.

“Recently, I made tests with my Arduino UNO and RGB LEDs,” MrFox tells 3DPrint.com. “I designed the first stand with a space for the Arduino but it was too big and used too much plastic filament. Then I remembered I had a broken RC helicopter with an ‘auto color changing’ LED, so I designed a second stand with a small space to hide all the electronics. In my version, I glued the components in the little space with hot glue and covered the bottom with foam so it doesn’t scratch my desk.”

The end result — which is constructed using the 3D printed stand, a USB wire, two resistors, an LED, and a small plexiglass board — can be used to display any text you want, simply by using a chalk marker to write on the plexiglass. The USB wire powers the LED lights, using the two resistors to reduce the voltage from 5v to 3v. Once lit up, the text as well as the edges of the plexiglass light up in the same color as the LED. There is no on/off switch, so when the sign is plugged into a computer, it turns on. MrFox recommends using a fade flashing RGB LED instead of a classic white LED for enhanced effects. He 3D printed his sign with a Velleman K8200 3D printer which he got for Christmas in 2013, but it can be printed on virtually any FFF-based printer.

“I love making useful [and] funny things,” says MrFox. “The problem is I don’t have a lot of objects ideas to design and print.”

One thing is for sure though. He did a tremendous job designing, 3D printing and creating this unique LED sign. You can download the files for 3D printing this sign free of charge from Thingiverse.

Check out the video of the sign in action below. What do you think? Have you tried 3D printing one yourself? Discuss in the 3D Printed Plexiglas LED Sign forum thread on 3DPB.com. 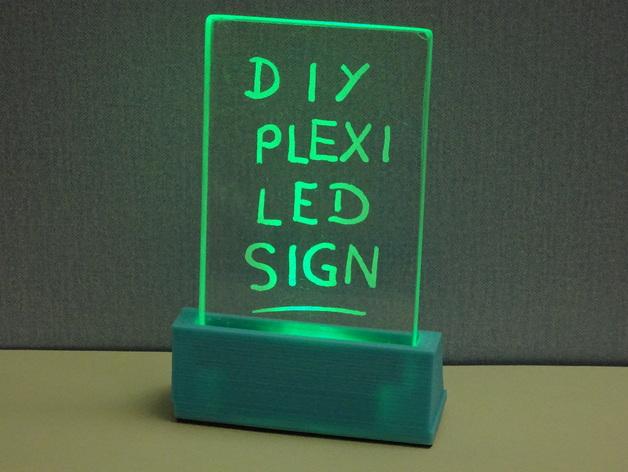