BICO (STO: BICO) has purchased another bioprinting startup, adding to its now massive portfolio of 13 acquisitions. This time around, it was rapid-throughput bioprinting company Allegro 3D, a spin-off from the University of California San Diego (UCSD). Led by principal investigator and CEO Wei Zhu, Allegro 3D develops technology for fabricating tissue models at the industrial scale to advance drug discovery and assay development. The $6 million acquisition, announced Friday, is meant to complement BICO’s existing bioprinting systems by helping customers increase their output of biofabricated constructs.

According to a company statement, Allegro 3D’s patented light-based printing technology will be commercialized by BICO subsidiary Cellink but will remain an independent entity. Given the high throughput nature of the process, the addition of Allegro 3D’s impressive portfolio, including its proprietary digital light processing (DLP) system that prints directly into multi well-plates, provides a massive injection in opportunities to scale operations for bioprinting customers. As Zhu announced the next step in Allegro 3D’s journey through a LinkedIn post, he also looked back at his work with co-founder Shaochen Chen, a bioprinting expert, professor, and chair of the NanoEngineering Department at UCSD. The company’s success builds on the bioprinting technology that Chen’s team invented in 2013, which started out as a platform for creating living biological tissues for regenerative medicine, with projects 3D printing liver tissues, blood vessel networks, heart tissues, spinal cord implants, and even coral-inspired structures that marine scientists can use for studying algae growth and for aiding coral reef restoration projects.

In 2017, Chen co-founded Allegro 3D with nanoengineering alumnus Zhu, and together they received grant and funding to develop the 3D bioprinting model into the fully commercialized Stemaker device, which is automated for printing in 6-, 12-, and 24-well plates and has a compact design that makes it easily fit any biosafety cabinet.

Today, Zhu pointed out that it has been a “great journey to work with Dr. Chen and the entire Allegro 3D team to translate our high-throughput and high-precision DLP bioprinting technology from lab research into broader commercial applications in regenerative medicine and drug discovery. We are extremely excited to join the Bioconvergence revolution. We truly look forward to Creating the Future of Health alongside Cellink, and the wider BICO family.” 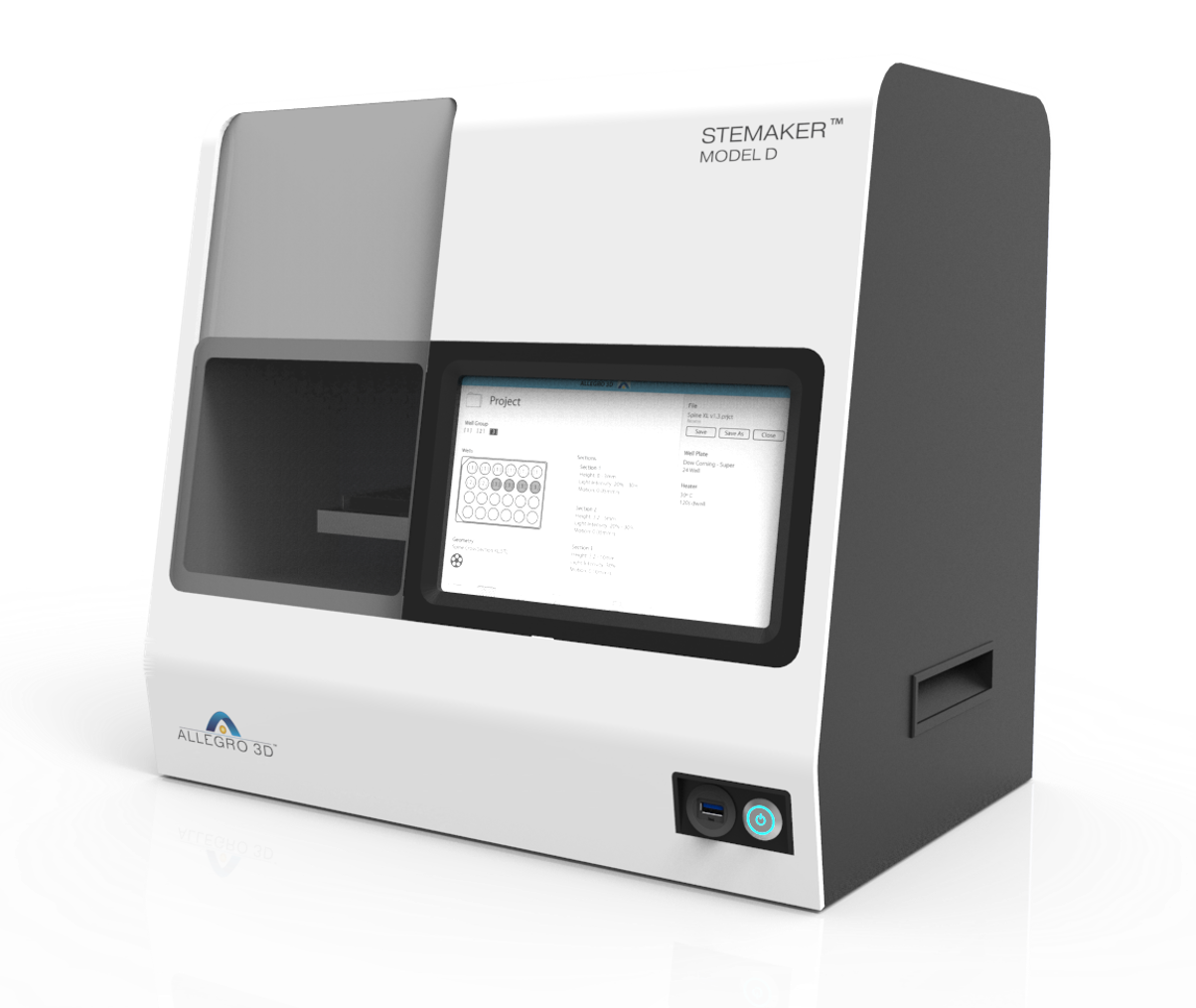 With the acquisition officially closing on May 5, 2022, Allegro 3D will be consolidated in BICO’s financial statements and the financial reporting in the second quarter of 2022. Allegro 3D’s products were commercialized by year-end 2021, and in 2022 the company is expected to generate roughly one million dollars in revenue with positive EBITDA (earnings before interest, taxes, depreciation, and amortization) margins. In the near term, Allegro 3D is expected to grow exponentially and above BICO’s financial targets.

Commenting on the deal, BICO’s Head of Mergers and Acquisitions (M&A), Jacob Thordenberg, said this follows the brand’s strategy of “add-on acquisitions” where Allegro 3D complements Cellink’s product portfolio strongly and can quickly be integrated into the current product offering and commercialization infrastructure. Moreover, the brand claims its solutions “bring us closer to a world where on-demand tissue is a reality,” reducing the dependency on animal models.

After rebranding as BICO, the company revealed that its net sales grew by more than 600% during the first half of 2021, driven by M&As and organic growth. For the full year 2021, the company revealed that 44% was organic growth, while the rest comes from the new companies in its portfolio. The strategy to acquire complementing technologies to cover the entire bioprinting workflow has been around since 2018, when BICO took over the German provider of automated liquid handling instruments, Dispendix. Following that first move, the company acquired 12 other startups, including Allegro 3D.

However, news of the latest M&A deal follows an internal rift that started after the departure of one of the company’s co-founders and Chief Financial Officer (CFO), Gusten Danielsson. In late April 2022, Danielsson, responsible for strategizing BICO’s economic direction, said CEO Erik Gatenholm was “no longer the right leader for the company, even if he remains a controlling shareholder.” The internal battle is not over yet, but that hasn’t seemed to stop the company from moving forward with its strategy.