Yangyang Luo recently submitted a dissertation, ‘Application of Halloysite Nanotubes in Bone Disease Remediation and Bone Regeneration’ to Louisiana Tech University. Focusing on what can be a very challenging field, Luo looks at new methods for encouraging bone regeneration with customized patient therapy.

Putting together two areas of research and treatment that have offered success to patients in need in recent years, Luo combines both targeted drug delivery and 3D printing to build on patient-specific treatment. Relying on halloysite, an aluminosilicate clay (Al2Si2O5(OH)4nH2O), Luo chose nanotubes (HNTs) built from this material due to biocompatibility and thermal stability. HNTs are already being used in applications like tissue engineering and drug delivery as they are viable for carrying medication that may be sensitive or even toxic. Such drugs can be released exponentially longer than in traditional drug delivery; in fact, HNTs may be released continually for up to 30-100 times longer. They can also be integrated with other chemicals such as vitamins, and the author points out that they have also previously been combined (both in vitro and in vivo) with structures like chitosan-gelatin-agarose hydrogels.

HNTs are affordable, environmentally friendly, and offer ‘abundant storage.’ In this study, Luo used them to deliver medication for treating osteomyelitis, osteosarcoma, and osteoporosis. Chitosan was selected as the medium for the cell growth scaffold due to polycationic properties and potential for antibiotic release, with Gentamicin used as the model drug during experimentation. Both Escherichia coli (E. coli) and Staphylococcus aureus (S. aureus) were used in samples while evaluating the potential for inhibition of bacterial growth. Live/Dead Assay of cells cultured on CS and CS/HNTs. Compared to control, there are live cells (green) are observed on the film-coated plates, but the number of dead cells (red) has increased as compared with the control plate but remain few in number. This indicates cells can adhere and proliferate on CS and CS/HNTs substrate. However, cellular morphology was influenced by the surface features and physicochemical properties of substrate.

Overall, in combining HNTs to 34 chitosan hydrogel samples, Luo concluded that mechanical properties were improved, and drug release was suitable and effective for decreasing the amount of bacterial growth.

“Our doped clay/chitosan nanocomposite may overcome the limitations of traditional anti-bacterial hydrogels by providing a focal drug delivery and sustained release of drugs, singly or in concert, or a suite of drugs or drug/growth factor combinations,” explained Luo. SEM images of hydrogel surface that consisted by 5% chitosan and combined with HNTs at different rations (1% to 5%). The pictures in the right corner are the zoom in pictures of the selected areas.

During this study, four different compositions were analyzed:

“In order to print them by 3D printer, all the above materials were made into filaments. PLA were extruded by Noztek at 175°C and resulted in the filaments with diameter of 1.75±0.05mm. In order to archive a uniform distribution of HNTs in PLA, 10 µl of silicon oil were added into 20g PLA and vortexed for 10 minutes, then 1.2g of HNTs were added and continually vortexed for another 10 minutes,” explained Luo. 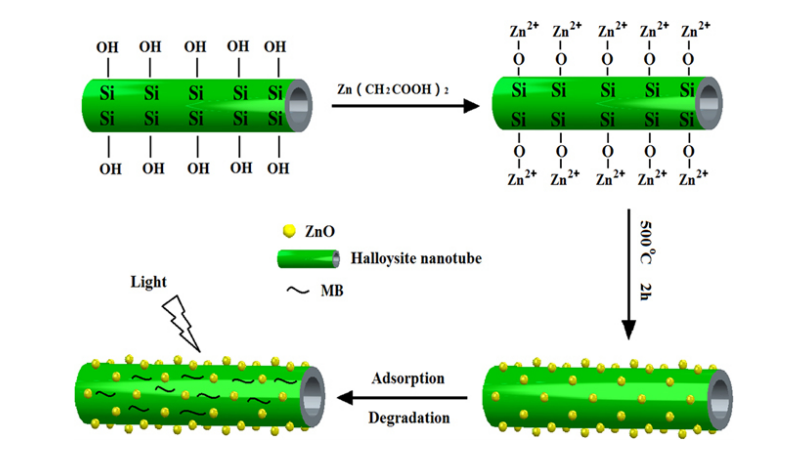 The samples were printed on an ENDER 3D printer, in disc shapes featuring a diameter of 0.6mm. Luo reported that surface modification of FBS+NaOH+FBS was responsible for improving PLA hydrophilicity, as well as offering ‘a friendly and attractive surface for cell growth.’ Analysis showed that following a three-week incubation period, early bone formation had begun.

“Even though the coating of gentamicin affected cell growth in early stage, cells recovered from its affection and exhibited a strong osteogenesis in the third week,” concluded Luo. “Furthermore, after 3 weeks storage, it still efficiently restricted bacterial growth.

“In the presence of HNTs, pre-osteoblasts synthesized an early formation of type I collagen matrix and osteocalcin secretion. Gentamicin coating also did not significantly inhibit cell growth. Gentamicin-coated scaffold showed an increased and comparable cell proliferation ability with control groups by day 21. Unexpectedly, pre-osteoblast exhibited a strong osteogenic response in the presence of gentamicin. Therefore, gentamicin-coated PLA/HNTs scaffold could not only prevent bacterial contamination but also promote bone regeneration.”

Researchers are using many different types of materials today as they attempt to find better ways to regenerate bones for patients around the world, from working with hydroxyapatite structures to porous metallic biomaterials, a variety of different coated scaffolds, and more.