We have seen an ever-increasing use of 3D printing technology within the medical field. Just yesterday, we reported on a woman who had a large tumor removed from her brain, thanks to a 3D printed model made by her husband. This is just one of the many cases where 3D printed models have been able to successfully aid in more precise, quicker and safer surgeries. This is only the tip of the iceberg though, as the adoption rates for the technology within medical practices still remain rather low.

Today, we learn about yet another successful use of 3D printed models within the medical field. This story comes out of China, specifically the Inner Mongolia Autonomous Region, where Professor Feng Tiehong has utilized a 3D printed template model in order to help destroy cancer in a young woman. This woman (remains unnamed) was suffering from cancer of her maxillary sinus area, and typical surgery to remove the legions would have left her with major scaring and disfiguring of her face. However, thanks to a technology called radioactive seed implantation, along with 3D printing, surgeons were able to more efficiently destroy the cancer cells.

Radioactive seed implantation has been used for years. It is a process by which radioactive particles (usually titanium) are injected into cancer tissue within a person’s body. It is most commonly used for instances of prostate cancer, but can be used for other types of cancers as well. These “seeds” are usually smaller than a grain of rice. When injected into the tissue, they provide radiation to the surrounding cells, within a 1.7 cm radius. Cancer cells are much more sensitive to the radiation, thus surrounding tissue is not effected, while the cancer cells are killed. The Anatomy of a radioactive seed (image source: drrichardstock)

Typically doctors use many CT scans, as well as ultrasound, in order to determine where to best inject the radioactive seeds. However, this process is a long and rather inaccurate one, requiring many attempts and many additional scans in order to get the seeds put in just the right places. Professor Fen Tiehong, however, has introduced a method in which a 3D printed template is created, where the injections can precisely be placed in the exact locations.

“In the past there has been no use of 3D technology, and the computer can be said to only do a general surgical planning,” says Professor Gen Tiehong. “In the past, during the procedure, in order to ensure the accuracy of the needles, and avoid other organs, we even need to do four or five or even ten separate CT scans. Now With 3D printing templates, needle positioning, depth, and everything else is set well in advance. This makes seed implantation more precise, so that treatment is greatly improved, while CT scans are only needed twice.” 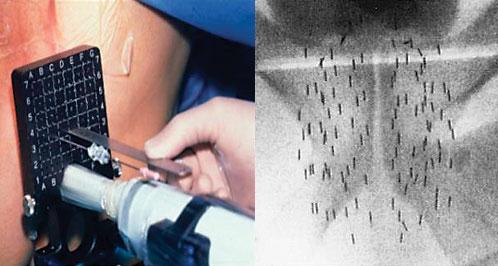 In what is referred to as “digital medical 3D printing template oriented technology”, doctors were able to create a model of this woman’s sinus area, using CT scan data and computer software to simulate the diseased tissue. Then a 3D conformal mold was printed out according to the shape of the cancer tissue’s surface. The template provided a puncture channel, created by computer software, showing and guiding doctors exactly where to place the radioactive seed-bearing needles. This template was placed on the woman’s facial area, and the needles were inserted into the channels in order to precisely place each individual radioactive seed.

Tiehong says that this technology has allowed surgery time to be cut from two hours down to only 30 minutes. He hopes and believes that 3D printing will gain much more mainstream traction within medical practice, and thinks the technology could give individuals an option for surgery that was not previously available.

It should be interesting to see if other hospitals and surgeons begin using this incredible method of radioactive seed implantation, now that 3D printing has been shown to provide better, more efficient results. What do you think? Will 3D printing aid in more cancer treatment in the near future? Discuss in the 3D Printed Radioactive Seed Template forum thread on 3DPB.com.