Cornell University researchers recently developed a realistic-looking prosthetic hand, for just $50, using 3D printing, soft robotics, and lithography. It can handle decidedly more delicate tasks, because it is the exact opposite of the stereotypical clunky metal robot most people imagine: it can grip, sort, and sense what it is touching, and not only resembles, but also feels like a human hand. However, the Cornell research team had not yet been able to connect the hand to brain waves, to give it a real sense of touch. But now, it looks like a research team from down under has beat them to it. This week at the University of Wollongong’s (UOW) Innovation Campus, researchers introduced a soft robotic hand that’s extremely close in both function and feel to a real human hand.

An interface that’s placed directly on a person’s arm muscles allows the lightweight, low-cost prototype robotic hand to respond to signals from the brain, just like a real hand. The lead UOW researcher, Professor Gursel Alici, said that they worked with the ARC Centre of Excellence for Electromaterials Science (ACES) on the project, using the ACES 3D printing capabilities and smart materials; we’ve written about ACES before, when their researchers developed a way to replicate and mimic brain tissue using 3D printed neural cells. Professor Alici said, “Users of prosthetic hands only use them for about a third of the tasks they could – because they are hard and heavy, and not as intuitive as they’d like. By using the smart materials developed at ACES, we have created a soft robotic hand that can be strong and carry heavy objects, but is lightweight and soft to touch. Current robotic prosthetics also have a number of joins, whereas 3D printing allows us to make one continuous structure which improves functionality and control.” I see his point: currently, prosthetic hands, both robotic and not, are undoubtedly amazing, but more often than not, they look like something you’d see in one of the Terminator movies; the metal endoskeleton part, not when it looks like Arnold Schwarzenegger. Professor Alici said that their latest prototype is just one step closer to a regular human hand.

“The hand is one of the most important parts of our body – it’s the most significant interface between a person and their environment. We have used the progress in smart, functional materials to create a robotic hand that has a better interface and interaction with the environment – and allows the user to make more lifelike movement,” said Professor Alici. 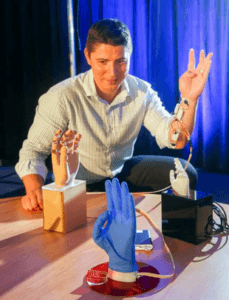 The low-power UOW prototype, in comparison to the prosthetics that are currently available, features an extended lifespan, because the researchers worked hard to make it more durable and robust. The team is currently improving upon the design of their prototype by enhancing the interface that turns brain signals into finger movement, and replacing the hand’s motors with artificial muscles.

Professor Alici said, “We will be making it even more user-friendly by creating a minimally invasive interface from the brain to the nerves, from the nerves to the muscles, from the muscles to the hand and fingers. So options like an implantable interface, or soft printable material on the arm instead of wires and electrodes.”

Professor Alici and ACES Research Fellow Dr. Rahim Mutlu demonstrated their prototype at the UOW Innovation Campus during the International Electromaterials Science Symposium this week, which brings together leaders in electromaterials research. According to The Stand, Dr. Mutlu has been designing, optimizing, and 3D printing the team’s soft robotic hand structure. He and Professor Alici have been continuing to explore smart materials as well, which could help position the fingers of the prototype, all of which are able to move individually, and plan to allow for haptic feedback. The hand is also much quieter than other robotic prosthetics, thanks to these smart materials.

Dr. Mutlu said, “Current actuation methods, for example, use noisy, bulky electric motors to generate finger-and wrist in some-movements. Our approach has no gears and motors to create the hand gestures-the smart materials will actuate the hand silently.”

Professor Gordon Wallace, the executive research director at ACES, and a keynote speaker at Inside 3D Printing Sydney in 2016, said the soft robotic prosthetic hand is a “great example of the practical applications of smart materials.”

Professor Wallace said, “We have developed a suite of materials that can be used for externally worn prosthetics as well as internal prosthetics, such as better bionic ears and cartilage and corneal regeneration.”

The prototype could be publicly available within the next two years. Take a look at this short video to see the hand in action. Discuss in the University of Wollongong forum at 3DPB.com.