A team of researchers at the Institute for Stroke and Dementia Research at Ludwig Maximilians University of Munich led by Ali Ertürk has recently discovered a new revolutionary 3D imaging technology that enables scientists and researchers to observe entire bodies with a greater level of transparency.

The technology is called Ultimate DISCO (uDSICO), which is basically 3D imaging of solvent-cleared organs that eliminates water content, lipids, and pigments from dead animals’ tissues. According to the original study, the technique “leaves the organs and skin intact but transparent, while preserving genetically encoded fluorescent proteins.”

It also implements a widely known method called tissue clearing, which eliminates any water content through dehydration and oily lipids from cell membranes, to observe the internal organs, skin, muscles, and bones of animals. Figure 3 from the study [Image: Nature]

Using the 3D scanned images released by Ertürk, researchers were able to observe even the most delicate and sophisticated structures and organs of the animal body, including tissues, bone formations, and muscle alignment. “We developed a major technology that allows making entire organs and organisms transparent. The new method provides the basis to map neuronal, glial, and vascular connections in the entire lab animals and potentially in deceased human brains,” stated Ertürk.

Once developed to its full capacity, the 3D Imaging technology can be utilized to treat and carry out some of the most complex medical conditions and surgical procedures that are often difficult to deal with premortem.

For instance, several brain damaging illnesses and impaired internal structures of neurons in the brain are difficult to treat with modern surgical methods due to the sheer complexity of the pathways of neurons. With the new technology, doctors will be able to secure a more detailed 3D scan of the brain to strategize surgical operations.

At the moment, this particular technology has only been applied to monkeys and rats. Ertürk emphasized that it can be utilized on postmortem brain studies but not on active patients. Over time, as the technology scales to become more innovative and flexible, commercially available versions will allow surgeons and researchers to use the technology to study brain diseases on postmortem human bodies. 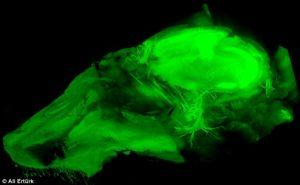 As seen in the image (left), researchers at the University of Munich were already able to map individual neurons of a mouse that connected to its whiskers. If the same technology can be implemented to human surgical procedures, in theory, it could be presented as a permanent fix for various devastating diseases such as Motor Neuron Disease, Alzheimer’s’ Disease and Parkinson’s Disease. Below is a video from New Scientist highlighting the uDISCO technology. Discuss this further in the 3D Imaging Technology forum at 3DPB.com.