Kubo and the Two Strings

Portland, Oregon-based animation studio Laika has made some of the most critically acclaimed stop motion animated films in the last few years. Their first film, Coraline, was one of the first feature-length animated films to feature 3D printed puppets and it is a technology that they have returned to on all of their projects since in increasing amounts, including ParaNorman, The Boxtrolls and their latest masterpiece Kubo and The Two Strings. They have become known for seamlessly mixing traditional stop motion animation and CGI to create some truly impressive animated sequences. And they created their most impressive stop motion sequence yet with the breath-taking Hall of Bones scene in Kubo and The Two Strings.

At one point in the film, the titular hero and his companions, Monkey and Beetle, face off against a giant skeleton made up of the bones of all of its previous victims. The massive skeleton towers over the story’s heroes, and while watching the film the first time I just assumed that the incredible sequence was mostly CGI. But while Laika isn’t afraid of using CGI in their animated films, the animation team feels that all of their characters and any props that they interact with should be real, physical objects, and that included the giant skeleton. In order for the scale to work correctly, that required them to construct a massive 400 pound, 16-foot-tall puppet. They believe that it is the largest stop motion puppet ever made, and building it was a challenge that the Laika team was more than happy to take on. 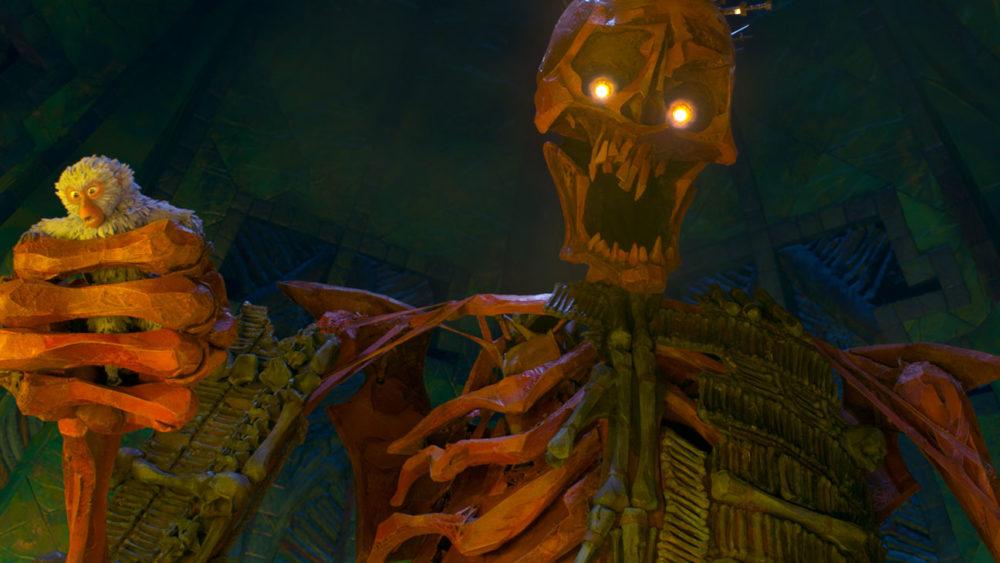 The large skeleton was made at a scale that allowed it to interact with the standard-sized stop motion puppets.

“Time and again I am amazed by the solutions that the rigging, camera, and animation teams would present. Absolutely the skeleton could have been CG. But when you’re in a room surrounded by artists that you love and respect and there is an overwhelming enthusiasm about the idea of building the largest stop motion puppet that has ever been created—and everyone is convinced we can pull it off—I want to support that spirit and enthusiasm in whatever way I can,” Laika visual effects supervisor Steve Emerson explained to Cartoon Brew.

The huge skeleton puppet being assembled.

Initially the animation team was planning on making a smaller scale puppet of the giant skeleton that would interact with scaled down versions of the main characters. They would also build a few larger leg and hand pieces to interact with the normal-sized character puppets. The problem was that the smaller versions would have had a limited amount of posability and be so small that they wouldn’t have looked very good on camera — especially as the storyboards for the sequence became more elaborate and would require more dynamic movements and close-ups. Having already built a 5-foot-tall, motion-controlled puppet for The Boxtrolls, it just seemed more practical to build a to-scale skeleton that could interact with the standard-size character puppets. The torso of the skeleton had a 20-foot wingspan.

Over the years Laika has increasingly used 3D printers to help manufacture many of the various character faces, props and miniature sets used in their films. So much so that 3D printers have become an invaluable puppet-making tool. However, once the decision to build the large-scale skeleton puppet was made, they knew that they wouldn’t be able to produce it using their standard 3D printers due to the size. They did find a company that is capable of 3D printing and milling the highly detailed parts using light-weight high-density industrial foam, so they had most of the skeleton 3D printed and also made some parts using traditional methods like papier-mâché. They were able to have the skeleton produced quickly, and because it was primarily made of foam, it was light enough to be moved by a massive, custom built rig.

The final skeleton puppet ended up being too large to animate so it was split into two different sections, the legs and the massive torso, head and arms section. The torso was controlled using a custom built hexapod robotic armature that was capable of six axes of movement. Five actuators allowed the Laika team to move, twist and manipulate the skeleton in virtually every direction with the extreme type of precision that is required for stop motion animation. Once assembled, the 400-pound torso puppet had a 20-foot wingspan, and included more than 1,000 unique bone shapes and 70 different swords that were made just for the skull. The skeleton skull was made with 3D printed foam and papier-mâché.

Here is a brief clip featuring the massive skeleton puppet:

It took Laika about 6 months to complete the giant skeleton puppet, and they filmed with it for almost a full year. In total 49.2 seconds of footage of the massive motion-controlled puppet was used in the film. That may seem like a whole lot of work for such a short amount of screen time, but watching the sequence on the big screen and knowing how much work went into it is simply mindblowing. Kubo and The Two Strings is an exciting and thrilling adventure, and it is probably one of the most elaborate and beautiful stop motion films ever made. The movie is in theaters now, and I cannot recommend seeing it on the big screen enough. And make sure that you check out Cartoon Brew for all the details on how the hexapod rig was built, and how Laika filmed the incredible Hall of Bones scene. Discuss further in the Laika Uses 3D Printing for Giant Puppet in Movie Sequence forum over at 3DPB.com.