3D printing can start on the z-axis and then rotate to 3D print more complicated geometries, or mill away part of the print. A close up look at a 3D printed part with additional features 3D printed on a different axis.

Not only does the ability to combine both additive and subtractive manufacturing to the same device allow for a greater range of complex geometries, but it will cut down on material cost and manufacturing time as well. This feels like an important next step in the development of industrial 3D printers. Currently, 3D printed parts often require supports that need to be manually removed. That adds several additional steps to 3D printing that can slow the process down, and require added manpower. The need to automate as much of the post processing as possible is going to be important as the technology continues to find itself applied to an ever increasing number of industries.

“Conventional [3D] printers are primarily planar lamination printers, but this machine is capable of not only planar lamination, but also 5-axis lamination. Ordinarily, undercutting can’t be performed with 3-axis control type NC, but with 5 axis, tilt and rotation functions are added. In other words, control is implemented for the X, Y, Z, tilt and rotation axis, and as a result, we’re able to print very complex shapes,” explained Enomoto development department chief director Kawamura Takehire.

Computer controlled 5-axis machining platforms have been around for decades, and the technology is the basis of most automated manufacturing systems. While there have been a few attempts to add automation to 3D printers, so far there hasn’t been much success. The problem isn’t typically with the 5-axis technology, but rather the fact that most extrusion technology requires a stable z-axis in order to work. But if the technology developed by Enomoto researchers is sound, then it is likely that we’ll be seeing it adopted by a wide range of industrial 3D printer manufacturers. It could eventually even be scaled down to a desktop size, though that is probably a few years off. 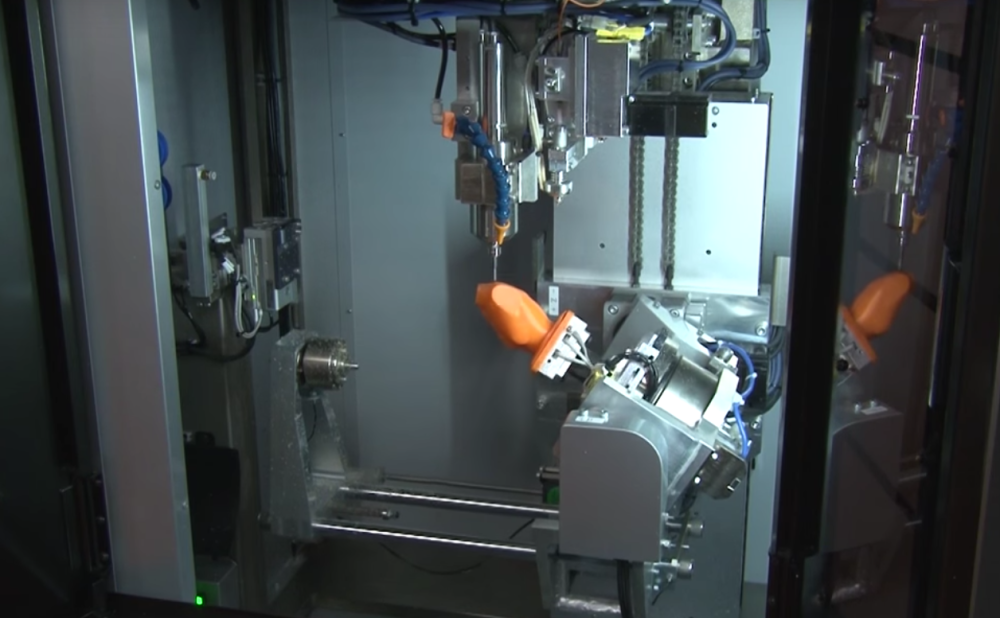 The 5-axis 3D printer also has a milling tool.

Here is some video of the 5-axis 3D printer in action: No jokes about whatever this is.

The benefits of a hybrid 5-axis 3D printer and milling machine like this should be obvious. First, eliminating the need for most support structures will save significant amounts of material, not to mention eliminate the labor required to clean it off. Any support material that may be needed can even be cleaned off by the milling tool on the 5-axis 3D printer itself. It will also reduce equipment costs, as smaller companies can purchase a single machine instead of a traditional 3D printer and a separate milling or CNC machine.

The Enomoto 5-axis 3D printer is especially suited to manufacturing and prototyping prosthetics and assistive devices, medical implants and aircraft or automotive components. So far there has been no indication of the final cost; however, it is expected to be available for purchase around 2017 once the company has evaluated printed samples and verified the technology. Discuss in the Japanese Enomoto 5-axis 3D Printer Collaboration forum over at 3DPB.com.