Over forty years ago the very first home video game system, the Magnavox Odyssey, was released to the public. While the original video game console wasn’t really what could be called a success, it didn’t take long for gaming to become an everyday part of our culture. From the Atari to the original Nintendo Entertainment System all the way up to our current generation of gaming consoles the Xbox One and the Playstation 4, it is likely that just about everyone has played video games at home at least once. Many lifetime gamers have literally grown up with video games, and probably have several generations of consoles and games packed away in a closet or a garage somewhere because they just can’t bear the thought of throwing them out.

Now, thanks to a pair of clever gamers, your old video games don’t need to be thrown away anymore, they can be displayed on your wall for everyone to see. A few months ago, Mark Josef and his friend and business partner Bill Chapman designed and 3D printed custom video game mounts that they used to turn their old and cherished games into artwork for their homes. We covered Josef and Chapman’s original project back in September when the pair put together an amazing wall display for a collection of some of their favorite Zelda games.  After they shared the results of their project with the gaming community on Reddit they were besieged with requests for them to start selling the mounts, so they decided to start a business and crowdfund it on Kickstarter. The Linked to the Wall – Video Game Cartridge Mounts campaign was finally launched last week, and they hope to be able to help fellow gamers all over the world find a new use for their old games. 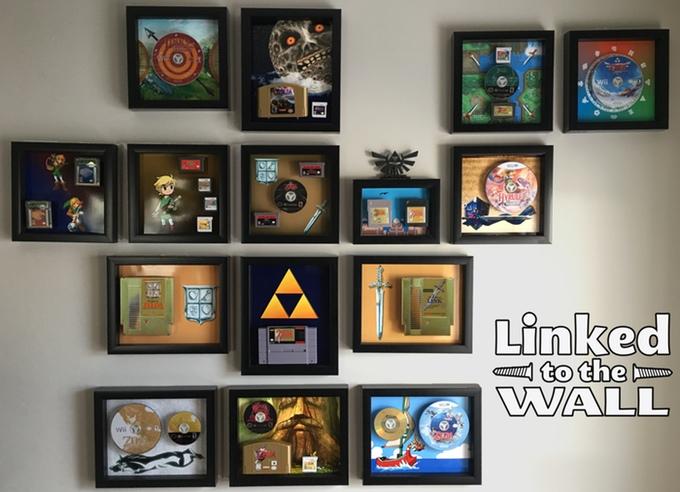 “We were tired of leaving our favorite games buried away. We want to put them out on display, to see them and be reminded of how much we love them.  So we designed a set of custom mounts that let us put our favorite games on the wall. Instead of leaving them hidden, we get to show them off.  We put a lot of time into getting mounts just right–and when we shared the results, other people loved our work, too. Now we want to bring them to you!” the pair wrote on their Kickstarter campaign.

The final game mounts that Josef and Chapman designed for their Kickstarter backers are significant improvements over their original versions. They were designed to be extremely solid and will hold any game put into them snug and securely. They are virtually invisible, so the games can easily be displayed unobstructed in shadow boxes or on a wall. Because the mounts simply click onto the game, there is no need to permanently affix them to anything, meaning that the games are entirely removable and they can be played at any time. Some of the available mount styles.

In order to get the quality high enough, and be able to sell them at a price low enough to be attractive to buyers, Josef and Chapman are going to need to have the final products injection molded. They are looking to raise $40,000 and will be offering their mounts in two pricing tiers. The Large Mounts are designed to fit a variety of larger game cartridges and discs, including NES, SNES, N64, and GEN cartridges. The Small Mounts are designed for Game Boy, Game Boy Color, Game Boy Advance, Nintendo DS, Nintendo 3DS cartridges, and a small Disc mount. The mounts can also be attached directly to the wall.

Check out the Kickstarter campaign video:

The Large Mounts are $10 each while the Small Mounts are $7 each, or they can be purchased in a bundle of five with a 20% discount. Mounts can be mixed and matched, just select the tier options that you want when you back the campaign. Josef and Chapman is also offering a display case that includes a UV-resistant acrylic front and a sturdy backing board that holds everything together. The Linked to the Wall campaign will be running until February 5th, and it has several different purchasing options so backers can get exactly the mounts that they need to make their own awesome wall displays. You can check out the Kickstarter campaign here and the full Linked to the Wall site here for more information.

By sending this form, you consent to share its content with Aniwaa and its trusted partners.
<script type='text/javascript' src='https://3dprint.com/wp-content/themes/lugh2019/js/megatabs.