While most people know him as his more colloquially familiar name King Tut, King Tutankhamun is unarguably one of the most famous of the ancient Egyptian pharaohs. Despite only being nine years old when he became pharaoh, he still ruled for ten years at the height of Egypt’s power before dying at the young age of nineteen. While there are Egyptian rulers who reigned longer, and certainly contributed more to the storied history of ancient Egypt, King Tutankhamun remains one of the most studied of the pharaohs because his tomb was found almost completely untouched in the 1920s and remains the most complete ancient Egyptian royal tomb that has ever been found.

Tutankhamun’s iconic golden burial mask includes some incredible detail, including inlays of several gemstones and glass-like materials. The mask is also adorned with lapis lazuli, obsidian, turquoise, amazonite and several other rare and precious stones. Artifacts from Tutankhamun’s tomb have toured the world many times over since their discovery, and the golden mask has been on display at the Egyptian Museum in Cairo for decades. But back in August 2014 when the mask’s display case lighting was being upgraded, museum workers accidentally broke the decorative beard off of it. You can see the visible glue line at the base of the beard.

Amazingly the workers, in secret, treated the three thousand year old artifact the same way that you’d treat a broken cup and simply tried to glue the beard back on with epoxy. Unfortunately the workers used too much epoxy material, so the beard had a visible crust of dried glue at the broken seam. Naturally when the hasty repair job was discovered the following January, archaeologists from all over Egypt – and the world – were horrified. The museum took the mask off display while a joint German and Egyptian team of researchers started the restoration process in October. 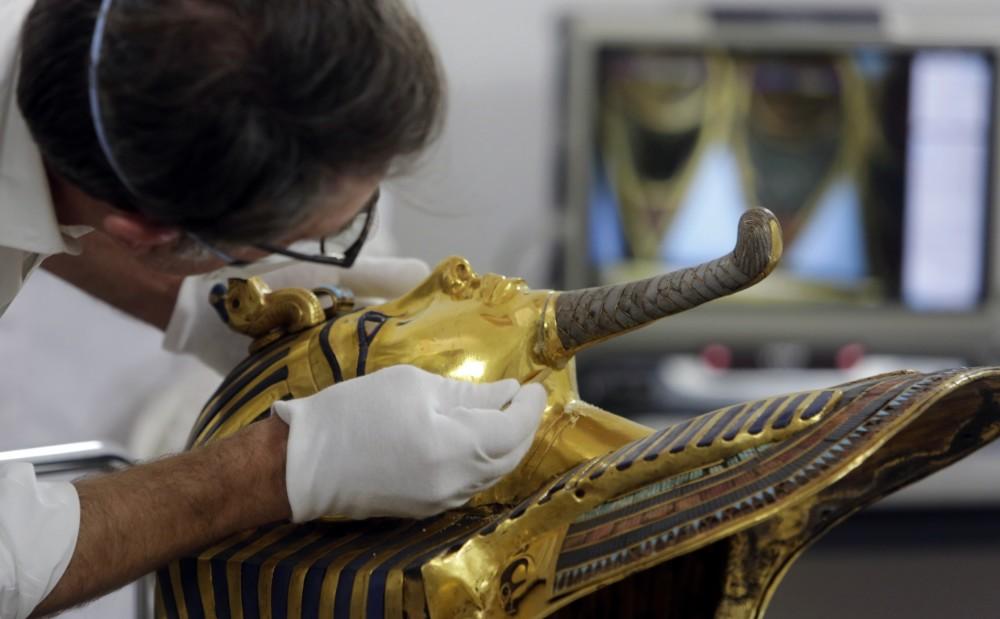 “We have some uncertainties now, we don’t know how deep the glue went inside the beard, and so we don’t know how long it will take to remove the beard. We try to make all the work by mechanical means… we use wooden sticks which work quite well at the moment, then there is another strategy we could implement, slightly warming up the glue,” explained lead restoration specialist Christian Eckmann.

The team took several 3D scans of the mask in order to try to determine exactly how much glue was used to repair it the first time and to provide any clues about the best way to remove the epoxy. Because the glue that was used was a resin epoxy, it isn’t soluble at all, so the team was very limited in methods of removing it without damaging the priceless artifact. The researchers ended up heating the glue up to soften it and manually scraping it off in a painstakingly tedious two-week process that was done using wooden tools and small spatulas. Curiously, this wasn’t the first time that Tutankhamun’s had been broken off of the burial mask and needed to be restored. The man who discovered Tutankhamun’s tomb in 1922, famed Egyptologist Howard Carter, discovered that the beard was loose when he originally removed the mask from the sarcophagus. In 1925, Carter removed the loose beard and oversaw the first restoration himself, which was not only successful but lasted until 2014 when the beard was broken off again.

“It is done,” Eckmann said. “Ninety years after Carter accomplished the first restoration of the mask in December 1925, we have the pleasure to present the mask in its original form.”

Egypt’s Antiquities Minister Mamdouh el-Damaty said that the latest reattachment process was accomplished using traditional Egyptian methods after the restoration group studied multiple adhesive materials and options. The researchers settled on beeswax, which was prepared the same way that it would have been prepared in ancient Egypt and for the third time the beard was once again restored to the mask. Only this time it was done correctly, and there was no crust of epoxy glue in sight. The entire restoration process took two months, and the Egyptian Museum of Cairo finally put the burial mask back on display this week.  Discuss this story in the 3D Scanned King Tut Beard forum on 3DPB.com. Epoxy crust no more. The restored mask went back on display on December 16th. [Photo: AFP]