The summer I was 15, I lived in England. A lovely family in Coventry took me in, and with them I explored the surrounding area. Among the places I loved most were Stratford-upon-Avon, Royal Leamington Spa, and Warwick Castle. London was all right, but I wasn’t there for urban hubbub, so it was really the history in Warwickshire in particular that lit my Anglophilic fire. All these years later, it’s today of all days I’d wish to be back around Warwickshire as research into a “Renaissance Whodunit” is to be presented.

An anatomist from the University of Warwick worked together with engineers and imagers from that university’s Warwick Manufacturing Group (WMG) as well as art historians from the University of Cambridge; metallurgists from Birmingham University; conservation scientists at the Rijksmuseum, Amsterdam; and the Fitzwilliam Museum in uncovering the history of two mysterious Renaissance bronze sculptures. Lead figures in the initial attribution include Professor Paul Joannides, Emeritus Professor of Art History, University of Cambridge; Dr. Victoria Avery, Keeper of Applied Arts, Fitzwilliam Museum; Dr. Robert van Langh, Head of Conservation, Rijksmuseum; and Professor Peter Abrahams, Clinical Anatomist, Warwick Medical School, University of Warwick. 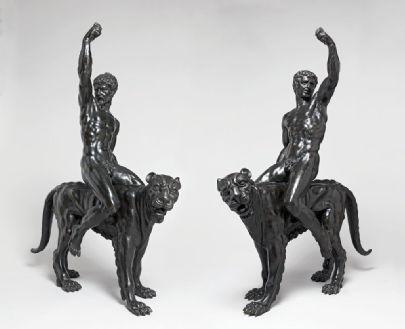 The two bronze sculptures–one of a younger man, one of an older man, both set astride panthers–first came to the attention of the art world when displayed in Paris in the late 19th century. While they were attributed to Michelangelo at the time, the matter of their creation soon fell into controversy as the works are unsigned and undocumented. In February 2015, this team proposed Michelangelo as the true artist of these works, this time working to prove the centuries-old mystery with the latest in technology. Metallurgists from WMG have employed neutron imaging, XRF analysis, X-ray videography, and, most interesting here, 360 degree laser scanning and 3D printing, to get to the root of the matter.

A key to the understanding of Renaissance art lies in who could do what–at that time, among artists, only Michelangelo and Leonardo da Vinci had the anatomical know-how to create fully correct human figures. Drawing also from the understanding that Michelangelo did produce some works in bronze (not limiting himself to marble for sculpture), clinical anatomist Professor Abrahams found an assurance that the works originated with this artist.

“I am very confident that these Tiger Bronzes will indeed be finally attributed to Michelangelo himself as there is no-one in the early 1500’s who had such detailed anatomical knowledge and modelling skills to make such near perfect muscular men,” said Professor Abrahams. Digital scan by WMG of one of the statues

Sculptor and bronze-caster Andrew Lacey is creating experimental replicas of the sculptures. Lacey will be working off high resolution scans taken of the originals by researchers from the WMG, led by Professor Mark Williams. The scans, accurate to below 100 microns, were necessary in order to gain understanding of the figures’ anatomical precision–difficult to see in the physical bronzes due to the thickness and imprecision of the material and the original casting technique used.

“It was fantastic to apply our technology to such an exciting project and help shed light on the origin of such beautiful statues. Usually we are working on something engineering-related, so to be able to take our expertise and transfer that to something totally different and so historically significant was a really interesting opportunity,” said Professor Williams. The 3D digital model created from the scans was sent off to Pinewood film studio-based Propshop to create 3D printed models at both reduced- and full-scale. From these 3D printed replicas, Lacey will take molds to be used with materials and methods that would have been contemporary to the original sculptures in order to create his replicas.

Dr. Victoria Avery of the Fitzwilliam Museum coordinated the project, working with all the collaborators, as well as presenting findings to the public.

“Thanks to this novel collaboration between art historians, conservation scientists, anatomists, engineers, prop-makers and artists, and through harnessing state-of-the-art equipment and imaging technologies, we can now reveal that these enigmatic bronzes were manufactured using some rather idiosyncratic working practices, which lends further weight to the early date already suggested by visual and preliminary technical analysis,” noted Dr. Avery. Today, Monday, July 6, the University of Cambridge will host an international panel presenting the research into and findings regarding the bronze statues. If these two statues are found to have been the work of Michelangelo, they will represent the only two surviving bronze pieces from the artist, from his early working period. Panelists will present papers and research covering these pieces’ construction, iconography, patron, and their place in Michelangelo’s career. The conference, ‘A Michelangelo Discovery – The Rothschild bronzes and the case for their proposed attribution,’ will run all day; check out the full itinerary and list of presenters here.

Do you know of other classical art pieces that we’ve been able to better understand through use of 3D printing technology? Let us know what you think of this application of digital technology in the 3D Printing to Solve Michelangelo Mystery forum thread over at 3DPB.com. Check out a talk from Dr. Avery, given at the Fitzilliam Museum back in February, detailing the initial findings in the video below.