Music dates back to the beginning of human times, bringing joy to the ears of individuals and entire cultures all around the globe, creating camaraderie among strangers, and uplifting the moods of many. Without music, the world would be an extremely boring place to live in, and one Siberian man, named Stepan Ignatovich, realizes this.

Ignatovich lives in Siberia and works as a scientist. In his free time, however, he likes to 3D model various objects as a hobby. He also has a strong interest in 3D printers, music, and microcontrollers. It was only about a year ago that he decided to build his very own RepRap Prusa i3 3D printer. Before long he had built several 3D printers for himself, and quickly became quite the 3D printing enthusiast.

Recently he decided to take his interest in music and his knowledge of 3D modeling and 3D printing, and create a 3D printed electric violin, which he calls ElViolin. While the challenge seems like one that would take quite a bit of hard work, Ignatovich says it really wasn’t all that difficult. “Actually everything was trivially,” he tells 3DPrint.com. “I found a similar F-F-Fiddle project (on Thingiverse), and a few months before that I had bought a classic violin and began to study violin music.”

He tried to 3D print the F-F-Fiddle but realized that the filament he had on hand wasn’t conducive to doing so. Also the playing position for the fiddle was not the same as that of a classic violin, so Ignatovich could not play it very well. This led to him deciding to design and 3D print his very own electric violin. He ended up using the F-F-Fiddle as inspiration and a guide in designing his very own 3D printed musical instrument. The results were quite amazing. 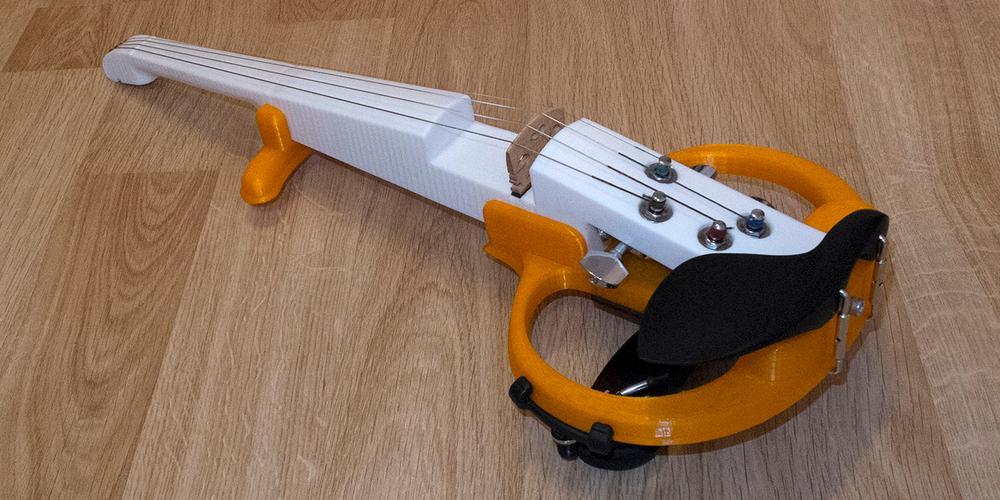 “For printing, I used my Prusa I3 homemade 3D printer. The printing area of this printer is 200×200 mm (common size for bed of RepRap 3d printers),” Ignatovich tells us. “I divided the violin into section and printed it using PLA plastic. All the other parts like the electronics, bridge, and strings I bought on eBay.”

It took Ignatovich less than a month from when he first came up with the idea to 3D print his violin until he had the finished product on hand. He is now making the 3D printable files available for others to download free of charge on Thingiverse.com. Be sure to check out his demonstration video below. What do you think of his design? Discuss in the 3D Printed Electric Violin forum thread on 3DPB.com.