America Makes is at it again. The Youngstown, Ohio-based institute has been focused for some time now on enhancing the US’ positioning in the additive manufacturing field. It stands as the flagship institute among the National Network for Manufacturing Innovation (NNMI) entities, is driven by the National Center for Defense Manufacturing and Machining (NCDMM), and, importantly, provides funding for innovative research efforts in the field of 3D printing. Lawrence Livermore National Laboratory (LLNL) announced this week that, together with General Electric (GE), it had received more than half a million dollars to develop software algorithms over the next year-and-a-half. For 18 months, LLNL and GE Global Research will work together to create open-source algorithms to improve upon the creation of metal parts via additive manufacturing methods, with $540,000 in funding for the 18-month project.

The award is intended to bring the resulting algorithms into use in both the public and private sectors, encouraging more participation in additive manufacturing using metal, with a focus on selective laser melting (SLM) methodology. At present, while SLM technology is clearly promising and many organizations are working with and improving upon the technique, there is no single approach common among all users. This lack of common ground has been holding it back from reaching its full potential.

“If we can lower the barriers to entry, we can help US companies, universities and research labs make further advances in additive manufacturing,” Ibo Matthews of LLNL said.

Among the leading names in this joint project are Ibo Matthews and Gabe Guss from the LLNL, and Bill Carter from GE. Matthews works as a researcher with the Accelerated Certification of Additively Manufactured Metals (ACAMM) Strategic team, and is leading up the work on the LLNL’s part. For his part, Guss is a researcher with GE Global Research’s Additive Manufacturing Lab.

“With the SLM processes in place now, you don’t always end up with a part that is structurally sound,” said Matthews. “It’s critical to have mechanically robust parts, especially for applications in industries such as aerospace and energy, where part failure could lead to major problems… Ideally, you would send the STL file to an arbitrary 3D printer and it will print out parts that are consistent in terms of dimensions and material properties. Currently, that doesn’t happen.” 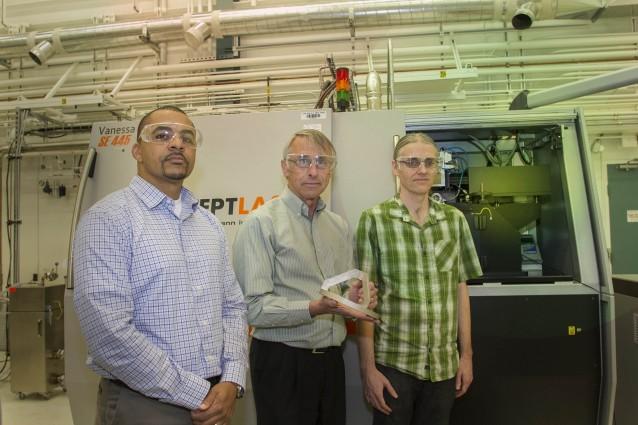 Sending the files to that “arbitrary 3D printer” is the problem, as not every machine will treat the same file in the same manner. While some SLM machines allow for customization based on the particular type of metal powder used, many as yet do not. This can lead to problems due to the layer-by-layer construction method, which may not alter the thermal settings based on the needs of specified powder materials.

“If you were able,” Matthews noted, “to process a 3D part by telling the machine what are the right laser parameters for optimizing the heating and melting for each layer, then the overall manufacturing process can be made more robust and efficient.”

And that’s just what the researchers are setting out to do. Matthews remarked that the abundance of SLM machines isn’t the problem; rather, it’s the lack of a software running the gamut of available machines. With a standardized software that could work across a number of platforms, parts could be produced in much the same way, with the same material properties, on different 3D printers. This sort of software would also remove the fairly high chance of user error, as any errors in the STL file are now filled in by the user with any information or details lacking, making it all too simple (and common) for misinformation to be sent to the printer.

“Commercial SLM machines do not permit access to specific process parameter information and tool paths,” said GE’s Carter. “This limits the ability of researchers to perform controlled validation experiments that support modeling work and process development. The cooperation of GE and LLNL will result in a demonstration of the new protocol on several research machines, paving the way for more robust process control and optimization strategies.” Working together with the ultimate goal in sight to make the created software available to the public, the researchers are able to leverage their expertise to create a strong product for open-source software availability. Researchers from the LLNL offer a strong background in laser know-how, while GE researchers are working on the software side to control the scanning laser’s settings to account for material properties and print parameters.

With 18 months allotted to the software R&D program, the stakes are high and bets are good for a deliverable product.

Do you think this research collaboration holds the key to unlocking SLM technology for more participants? Let us know in the Grant for SLM Software Development forum thread over at 3DPB.com.