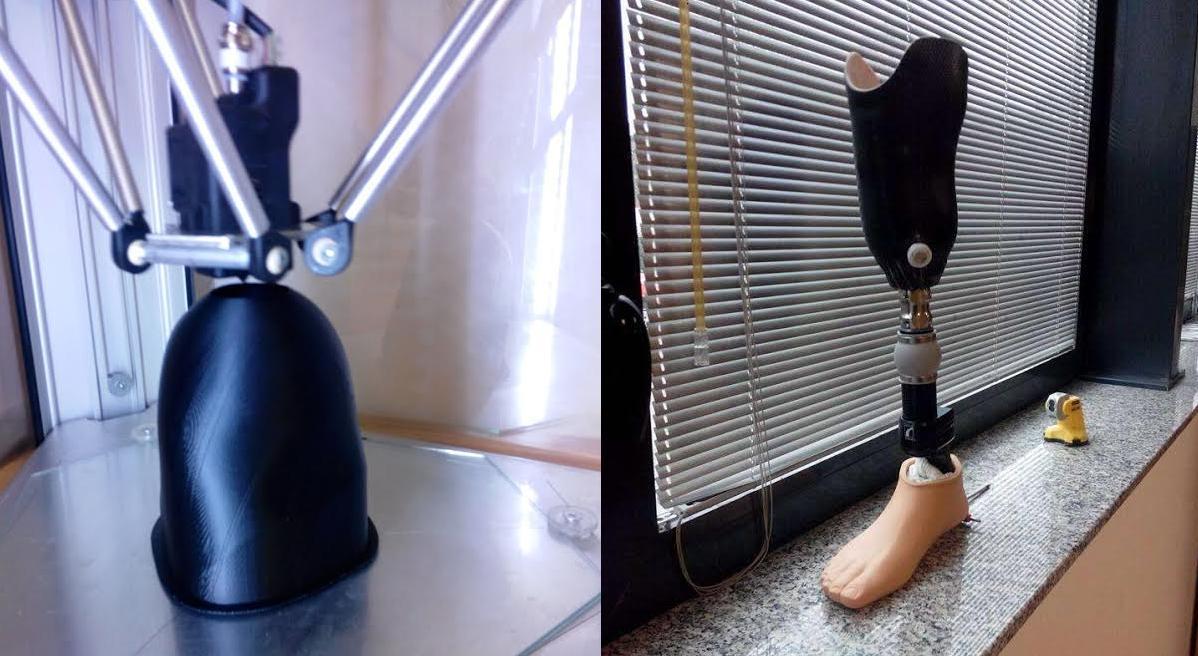 When we typically talk about 3D printing and prostheses, most of the stories that we have covered have been focused on prosthetic hands and arms. Individuals from all over the world have seen 3D printing come to the aid of their loved ones, who previously were handicapped by birth defects or accidents. Groups such as e-NABLE have formed in order to open source designs for these prostheses, and share other ideas such as assembly instructions and recent technological advancements. It was only a matter of time before we would begin seeing the use of 3D printing in the creation of other types of prostheses. For Marco Avaro, the owner of Del Bene Orthopedic studio in Azzano Decimo, Pordenone, Italy, 3D printing has been a life saver when it comes to manufacturing prosthetic legs. Avaro, who is a biomedical engineer, purchased a DeltaWASP 20×40 a few months ago to create prostheses for his patients. The FFF-based 3D printer, which features a build volume of 200mm (diameter) x 400mm high, has allowed Avaro to fabricate 2 prosthetic legs per day. This is an incredible accomplishment, and it could only be realized via 3D printing.

“I deeply believed in this kind of technology,” Avaro explained. “When I got in contact with WASP I really found a jewel: the printer was perfect for my job.  It allows me to realize very big pieces, of over 40 centimeters at a time. The quality is so high that I don’t have to process the plastic [afterwards]. The printing speed is very high as well, and the structure of the machine permits me to reproduce wafer-thin shells. There are several benefits.”

3D printing has allowed Avaro to completely customize each prosthetic leg to a degree previously not possible. He says that this has been especially helpful in cases of degenerative illness in patients, where their leg stumps become very asymmetric. Avaro 3D prints the outer shell of the prosthetic leg socket as well as the foot itself, and then uses other technologies which include the use of resins and carbon, to create the rest. The material used in the 3D printing process works very well with these resins and other materials, and tests have proven that the force strains on the prosthetic are distributed equally, which means a more comfortable, reliable fit for a patient.

During the production of the prosthetic legs, the 3D printed plastic holds up extremely well and actually allows for a better overall fabrication of the devices.

“The DeltaWASP 20×40 prints brilliantly, [and was able to] overcome the destructive tests and the calculation tests with accomplished elements,” explained Avaro. “This makes it possible to realize a resistant structure which is much more lightweight.”

It’s not just the functionality of the 3D printed parts that have Avaro excited. He also says that the aesthetics of it are better than more traditional prostheses. The 3D printed plastic is able to be polished, which leaves the prosthetic leg with a shiny, rich look.

Most importantly though, these legs are made on an individual level for each and every patient, meaning they fits perfectly, and are extremely comfortable to wear. “The printer is so fast,” said Avaro. “To realize a tibial prosthesis I [previously] needed eight hours, now I can make it in two. I have the chance to realize prostheses for the ones who practice specific sports like mountain climbing. I finish the prosthesis, deliver them and there is never need for any revisions. Physiotherapists that follow the rehabilitation are amazed [at] what we do. [Discovering] WASP changed my work, and consequently my life.”

I feel as though we are really on the brink of highly advanced prostheses, thanks to 3D printing technology. It should be interesting to see what other advancements occur in the coming months and years ahead. What do you think about these prosthetic legs? Discuss in the 3D printed prosthetic leg forum thread on 3DPB.com.