At RAPID+TCT 2019 in Michigan, I spoke with Byron Kennedy, the CEO and co-founder of Australian startup SPEE3D, which developed a patented supersonic 3D deposition (SP3D) technology for super-sized metal 3D printing at production speeds. The Melbourne-based company offers two large-scale systems: the WarpSPEE3D, which can print parts up to 1 x 0.7 m, and its award-winning little brother, the LightSPEE3D, capable of 3D printing bronze parts. At the show, Kennedy showed me an aluminum hose fitting that the startup had made for the Royal Australian Navy – one part was cast, and the other was 3D printed. By the time I saw it, the part had already been certified and tested out by the Navy.

“We do have a real interest in the marine industry, because our 6061 aluminum is a very corrosion-resistant material, as well as the bronze. So it’s an under-serviced market at the moment, because not many people can do bronze, and big parts like this is really, really difficult. You need the right materials and the right sizes for that market, and really that’s work we’re putting a lot of focus into,” Kennedy told me at RAPID.

Now, SPEE3D has just announced that the Navy will be deploying its  innovative SP3D technology – the WarpSPEE3D in particular – in a trial program to help streamline the maintenance of its patrol vessels.

In response to a $1.5 million investment by the Australian Government into a two-year pilot of its metal 3D additive manufacturing for the Navy, the company has teamed up with Charles Darwin University (CDU) and the Advanced Manufacturing Alliance (AMA) in order to deliver the pilot program. Actually, the AMA initiative was founded two years by SPEE3D and CDU, and is now, according to a press release, “recognized as a global centre of excellence for real world applications of 3D printing technology.” 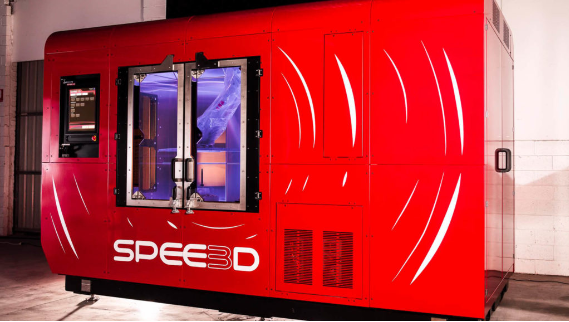 SPEE3D uses metal cold spray technology in order to rapidly 3D print industrial-quality metal parts. Instead of using costly gases and high-powered lasers, the method uses kinetic energy, which means metal parts can be 3D printed, affordably, at sea or out in the field. Type C Aluminium Camlock Fitting, with Hose Tail, 3D printed in Aluminium 6061 for use in marine environments by the Royal Australian Navy.

The WarpSPEE3D in particular, which prints with both copper and aluminum, features a deposition rate of 100 g/min, a maximum part build size of ø 1000 x 700mm, and a maximum part weight of 45 kg. Additionally, the printer can be modified to decrease its environmental impact by installing solar panels and running off solar energy, and it can produce near net shapes that are well-suited for industrial and commercial applications. This is good news, since the pilot program has a goal of majorly increasing the parts that are available to the Navy through the normal supply chain.

“This high-tech machinery enables metal components to be produced quickly and efficiently, meaning our ships can get back on the water without delay. Benefiting both the Navy and industry, the knowledge transfer gained using this capability also positions the Advanced Manufacturing Alliance to pursue further opportunities,” said Australia’s Minister for Defence Industry, the Hon. Melissa Price, MP.

“Benefiting both the Navy and industry, the knowledge transfer gained using this capability also positions the Advanced Manufacturing Alliance to pursue further opportunities. This capability is a prime example of Australian innovation at its best and supports the Government’s unprecedented shipbuilding and sustainment plans.”