Women and girls are disproportionately affected by the HIV/AIDS epidemic, comprising more than half of the estimated 37.9 million people living with the disease. Moreover, according to United Nations AIDS, some regions of the world, like sub-Saharan Africa, have an even higher burden, with women and girls constituting over 57% of the affected population, compared to 52% worldwide. With an unwavering increase of the disease along with antiretroviral treatments that can only help control the virus, not kill it, preventing HIV infection is essential. Researchers have been investigating for many years the use of intravaginal rings (IVRs) as devices for the delivery of agents to protect against the sexual transmission of HIV and other diseases, as well as to prevent unwanted pregnancies. At the University of North Carolina (UNC) at Chapel Hill’s Eshelman School of Pharmacy, professor Rahima Benhabbour has been passionately developing innovative technologies to improve health conditions for women. Using 3D printing technology and her startup company AnelleO, she is quickly creating a breakthrough IVR that will be more efficient in drug delivery and can be customized to women’s needs.

Benhabbour recently said that watching the CEO and founder of Carbon, Joseph DeSimone, demonstrating how his 3D printer worked during a TED talk, made her wonder how she could apply the technology to IVRs. Soon after, she established her own company to print intricate features on customizable devices that could help women worldwide.

“I’m from North Africa. I’m a woman. The thought of helping women–some that don’t have a way of protecting themselves or controlling their lives–that’s my ultimate passion. It’s a dream for me to give back,” said Benhabbour, also an assistant professor at the UNC/NC State Joint Department of Biomedical Engineering.

Benhabbour has been featured on Innovate Carolina (a team working closely with a network of university partners to turn novel ideas into economic and social value), for her use of 3D printing technology to prevent HIV infections and other health conditions in women. Since launching her AnelleO in 2016, Behnhabbour has been working on the first product, AnelleO PRO, a once-a-month progesterone-releasing ring for infertility and assisted reproductive technology. The ultimate goal of AnelleO is to create a more efficient drug delivery that can be customized to women and their individual needs since current technology for intervaginal rings is a one-size-fits-all product. AnelleO PRO, the first intravaginal ring for infertility, aims to develop and test biocompatible 3D printed IVRs for the mechanical and release properties of a model drug called β-estradiol, then translate these methods to the target drug, progesterone. Benhabbour is using a novel 3D printing platform, driven by the proprietary Continuous liquid interface production or CLIP process, pioneered by Carbon. She also applies CAD software for specifying shapes and geometry, which is recreated via a photopolymerization process. AnelleO PRO IVRs are fabricated with CLIP using a biocompatible resin and takes just 15 minutes to print each ring. According to Innovate Carolina, current products approved for progesterone supplementation are limited to messy and unpleasant vaginal gels or inserts and painful intramuscular injections that have to be administered daily. While AnelleO PRO could safely and steadily release progesterone over an extended duration, with the potential to replace current therapies and impact millions of women.

“Unlike traditional technology, 3D printing gives us the ability and engineering to play around with the design and properties of a product. We can engineer parts that would not have been possible before,” she suggested back in September. “The main goal of developing this 3D technology is to have the ability to change the ways in which women’s products are manufactured and designed. And the applications for the technology are endless – including prevention of HIV, sexually transmitted infections and unintended pregnancies.”

On a similar note, the National Institutes of Health (NIH) reported last July that another research open-label study of women in southern and eastern Africa, using a vaginal ring that is inserted once a month and slowly releases an antiviral drug, was estimated to reduce the risk of HIV by 39%. IVRs are quickly gaining prominence. However, Benhabbour’s idea to use 3D printing to develop them could be even more innovative than all the others, especially considering that the technology helps to cut down costs, print on-site, and would just require technical expertise to run the machines. This means that in regions where it would take longer to receive the IVRs–due to logistics or high costs–specialists could actually print them within minutes for patients. In the end, it all translates to saving lives, reducing risks, and improving existing health conditions for women and girls. 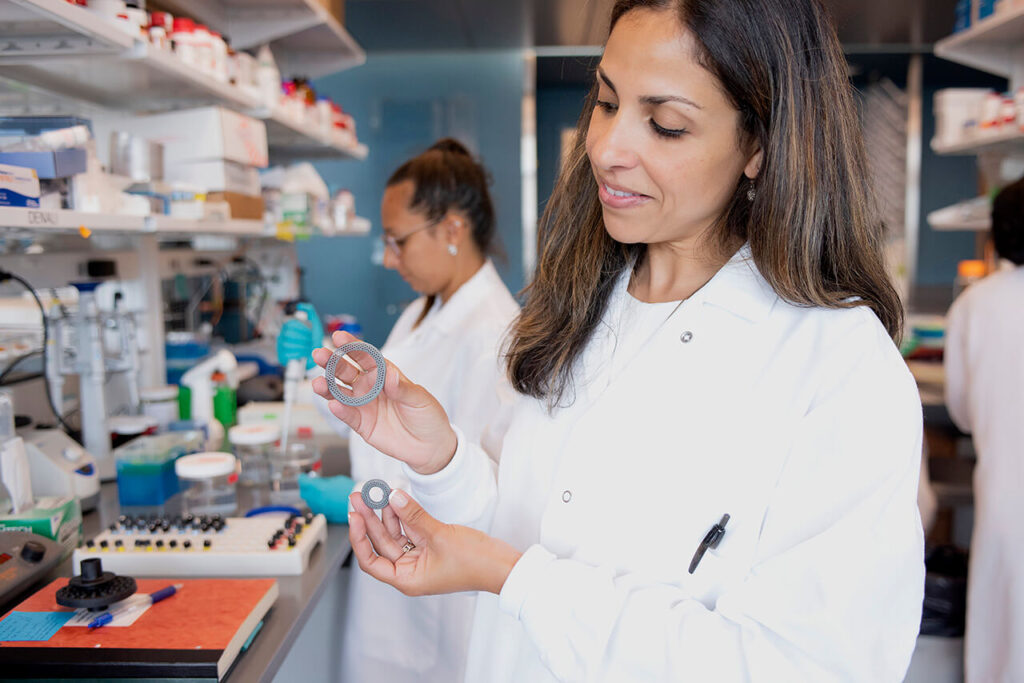 Rahima Benhabbour at the lab

Originally, the Chapel Hill UNC spin-off company received the KickStart Venture Services Commercialization Award, which is part of Innovate Carolina’s campus-wide effort to translate discoveries made in Carolina’s academic laboratories into products and services that can benefit people both in the local vicinity and around the world.

Benhabbour suggested that “KickStart Venture Services gave us a ‘kickstart.’ You may have an idea, but no funding and KickStart helps make connections and gets things moving, while serving as an ongoing resource. The main hurdle has been to find business leads. KickStart helps faculty launch and carry their startups, because we’re too busy in our academic lives to be the lead of a company. We need that support with the business know-how. That support has been tremendous.”

A critical source of funding came from the Eshelman Institute for Innovation (EII) at the Eshelman School of Pharmacy. In this case, EII provided a $200,000 grant titled “Fabrication of Geometrically Complex Intravaginal Rings by Continuous Liquid Interface Production (CLIP) 3D Printing Technology” that helped Benhabbour initially create the technology. Such financial backing, along with the additional entrepreneurial support from EII, in partnership with KickStart and the broader Innovate Carolina team, bolstered Benhabbour’s early efforts to bring her concept to life.

The bioscience company, headquartered in North Carolina’s UNC at Chapel Hill, is quickly developing drug delivery technologies with uses in potential end markets including devices, reproductive systems, cancers, and other neoplasms. AnelleO also got a lot of help from the UNC Office of Technology Commercialization team (another part of the Innovate Carolina initiative) in helping with guidance on patents and licensing, not a minor issue when it comes to innovation. Her lab is packed with more than seven scientists, most of them women, something she is particularly proud of.

According to the expert, its not always easy for faculty members to pursue their big idea, yet she offers encouraging advice: “It’s hard for an academic, you always have questions. What I’ve learned is that if you have an idea, put it out there and talk to multiple people. Get it out there, and see what the potential is for your idea as opposed to looking at the hurdles. Instead of looking at how something won’t work, just think of what it can be.”

As a big part of her mission for innovation in science, Benhabbour has also been working on a seven-year research along with colleagues at Chapel Hill, to develop the first-ever injectable implant for HIV. The long-lasting treatment and prevention technology has been tested in animals and would make an enhanced injectable drug implant that is ultra-long-acting and can merge various drugs, while also dealing with a number of hurdles encountered with present HIV prevention and treatment techniques.

Benhabbour’s novel approach along with her ongoing interest and concern to help people with life sciences has led to innovative solutions that could stop life-threatening diseases and overall improve women’s lives. She moves away from traditional forms of drug administration, leading the way with her vision to incorporate the latest technologies to her up and coming lab efforts and new company. We expect to hear more about Benhabbour and her one-of-a-kind 3D printed IVRs. Rahima Benhabbour and her team