The stream of 3D printing news coming from the medical world is almost constant. From 3D printed implants to complex medical models to actual human tissue, there are so many developments happening so rapidly that it’s almost impossible to keep up. Look at what has happened in one year alone. A comprehensive review of all of the amazing medical breakthroughs that happened in 2018 would be overwhelming, so we’ve chosen 10 of the most fascinating, groundbreaking medical stories of the past year to share with you. For the first time in Bulgaria, a patient received a polymer 3D printed rib implant. 35-year-old Ivaylo Josifov had to have his fifth rib removed due to a growth, and doctors used 3D printing to perfectly recreate the size and shape of the original rib so that the implant could fit into the patient with no complications. 3D printed prosthetics are not a brand new story, but what Médecins Sans Frontières is doing is truly amazing. The organization has been running a reconstructive hospital in Jordan for war victims for over a decade now, and the number of patients with missing limbs due to bomb blasts is staggering. The hospital is restoring these patients’ limbs with 3D printed prosthetics, offering hope in a grim situation. Scientists at the University of New Mexico are working on creating 3D printed ligaments for the first time, using a special electrospinning technique. Ligament tears are common injuries, and they’re difficult to treat, with current standard treatments carrying risk of future complications. 3D printed ligaments could represent a new breakthrough in the way these injuries are treated. Researchers at the University of Minnesota 3D printed photoreceptors on a hemispherical surface, a technique that could eventually lead to an actual functional bionic eye. The technology could pave the way for curing blindness.

Placenta on a Chip The placenta is a mysterious organ that scientists have been trying to learn more about for years. Researchers have now 3D printed a placenta on a chip, which is a miniature cell culture that behaves in the manner of a full-sized organ. This tiny chip may be able to provide brand new insight into the way that conditions pass from mothers to children. COPD is a common and debilitating illness, especially prevalent among veterans. Relief may be on the horizon, though, in the form of a 3D printed artificial lung, the first truly wearable device that is compatible with human tissue and can provide both short- and long-term respiratory support. Hundreds of thousands of people in the United States alone suffer from spinal cord injuries, which cause loss of function up to and including complete paralysis. But a tiny 3D printed neural scaffold could help patients with long-term spinal cord injuries actually recover some function in the future. A patient in India lost his talus bone in a devastating accident, but in a world first, in trauma, surgeons were able to completely replace the bone using a 3D printed, patient-specific titanium implant. BIOLIFE4D wants to accomplish the ultimate in 3D bioprinting: 3D printing an actual human heart. This won’t be happening next year, or for quite a while probably, but earlier this year the company announced that it has successfully 3D printed cardiac patches, sooner than expected. This is a promising sign, and one more step forward in the quest to 3D print entire new organs. 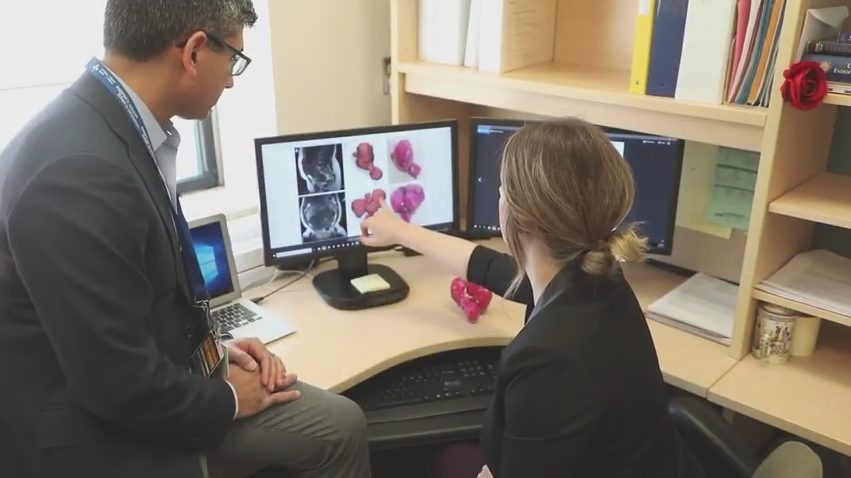 A patient was diagnosed with nearly 50 tumors in her uterus, and doctors told her that her only option was a hysterectomy. When she sought a second opinion, however, determined doctors were able to remove all of the tumors while leaving her uterus intact – thanks to an intricate 3D printed model that allowed them to plan the surgery ahead of time.