Researchers at MIT have developed a new 3D printer print head that can deposit material at extremely high speed, creating objects in minutes instead of hours. A. John Hart, a professor of mechanical engineering and director of the Laboratory for Manufacturing and Productivity and the Mechanosynthesis Group at MIT, is an expert on 3D printing and is working to advance the development and adoption of the technology. One thing 3D printing needs to be, he believes, is faster.

Hart worked with doctoral student Adam Stevens and graduate Jamison Go, who now works as a mechanical engineer at Desktop Metal, to study several commercial FFF desktop 3D printers. The team concluded that the 3D printers’ volumetric building rates were limited by three factors: how much force the print head could apply as it pushed the material through the nozzle; how quickly it could transfer heat to the material to get it to melt; and how fast the printer could move the print head. They then developed a 3D printer that circumvents all three of those limitations. The design involves a filament with a threaded surface that goes into the top of the print head between two rollers that keep it from twisting. It then enters the center of a rotating nut, which is turned by a motor-run belt and has internal threads that mesh with the external threads on the filament. As the nut turns, it pushes the filament into a quartz chamber surrounded by gold foil. A laser then enters from the side and is reflected multiple times by the gold foil, passing through the filament and heating it.

The filament then enters a hot metal block where it is heated to a temperature above its melting point. It continues to melt and narrow as it descends and is eventually extruded.

It sounds complicated, but it’s much faster than standard 3D printers, in which the filament is pushed by two small, rotating wheels. If you try to speed things up by adding more force, the wheels lose traction and the filament stops moving. That’s not an issue with the MIT design; the matching threads on the filament and nut ensure maximum contact between them, and the system can transfer a high force to the filament without losing grip.

Typical 3D printers also rely on thermal conduction between the moving filament and a heated block. A higher feed rate may not completely melt the filament, but preheating the filament with a laser ensures that it is entirely melted by the time it gets to the nozzle. Tests showed that the researchers’ print head can deliver at least two and a half times more force to the filament than standard desktop 3D printers can, achieving an extrusion rate 14 times greater.

Because the extrusion rate was so high, the researchers needed to find a way to move the print head fast enough to keep up. They designed an H-shaped metal overhead suspension gantry that has a continuous belt that travels around pulleys powered by two motors mounted on the stationary frame. The print head sits on top of a stage that is connected to the belt and is carried quickly and smoothly through the prescribed positions within each plane.

The researchers 3D printed a series of test objects, including a pair of eyeglass frames, which took 3.6 minutes; a small spiral cup, which took just over six minutes; and a helical bevel gear in just over 10 minutes. The printed layers were highly uniform, and the parts showed themselves to be strong and robust in tests of their mechanical properties. The researchers also 3D printed the same object with their printer and several commercial models: a triangular prism 20 mm tall. For a comparable resolution, the printer achieved an average volumetric build rate up to 10 times higher than the other printers. 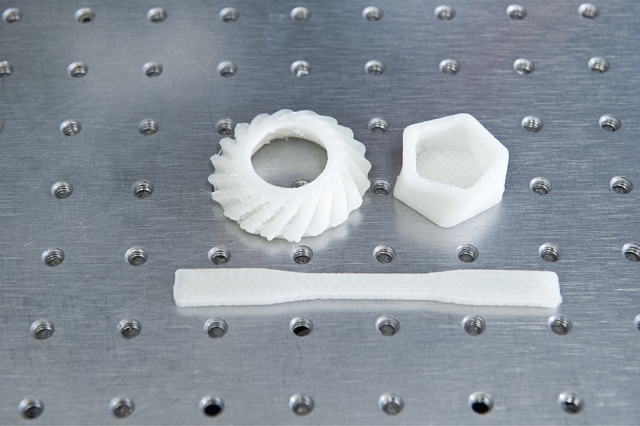 The printer wasn’t without its issues; for example, the high build rates resulted in layers that did not adhere well, as well as distortion. These problems were solved, however, by directing a controlled flow of cooling air onto newly extruded material. The researchers are also working on improving the printer’s accuracy by coordinating the extrusion rate and print head speed, as well as implementing new control algorithms.

MIT’s 3D printer prototype cost about $15,000, making it an unlikely candidate for replacing most desktop models. However, it could be competitive with some higher-end professional 3D printers.

Hart and his team are also working on developing new 3D printing materials that are environmentally friendly and easy to source – like cellulose. Cellulose has many advantages: it’s inexpensive, biodegradable, renewable, robust and chemically versatile. It’s difficult to 3D print, however, because it tends to decompose when heated. Hart and former postdoc Sebastian Pattinson worked with cellulose acetate, a chemically treated form of cellulose that has fewer hydrogen bonds and thus makes it less prone to decomposition. First, the cellulose acetate was dissolved in an acetone solvent to form a viscous material that flows easily through a printer nozzle at room temperature. As the mixture spreads across the print bead, the acetone solvent quickly evaporates, leaving the cellulose acetate behind. Immersing the printed object in sodium hydroxide removes the acetate and restores the full network of hydrogen bonds that give cellulose its strength.

The researchers were able to 3D print complex objects with good mechanical properties from the material. Their strength and stiffness were even found to be superior to objects printed from common 3D printing materials. The researchers then began experimenting further.

“You can modify cellulose in different ways, for example, to increase its mechanical properties or to add color,” said Hart.

The researchers modified the cellulose acetate by adding antimicrobial properties. They 3D printed a series of disks, some from plain cellulose acetate and some with antimicrobial dye added, and deposited a solution containing E. coli bacteria on each one. They left some of the disks in the dark and exposed others to light from a fluorescent light bulb. After 20 hours, analysis showed that the disks made with dye and exposed to the light had 95 percent fewer bacteria than the others. They then 3D printed surgical tweezers as an example of a tool that could be made with the valuable antimicrobial properties.

Hart believes that there is commercial potential for their cellulose 3D printing process. Cellulose is inexpensive and widely available, and can be printed at room temperature, eliminating the need for a costly heat source. As long as the acetone is captured and recycled, it’s also an environmentally friendly process.