We’ve seen 3D printed clothes hit the runways already. Some 3D printed fashion is for the novelty — the latest new thing is always the star of the runway — but eventually, 3D printed materials could enter the realm of the truly wearable.

German scientists — a team consisting of R. Melnikova, A. Ehrmann, and K. Finsterbusch — from the Faculty of Textile and Clothing Technology at the Niederrhein University of Applied Sciences are exploring the possibilities in combining 3D printing technology and textile weaves. The team has been looking into practical potential for the theoretical collaboration of these two very different technologies. Whereas textile weaves have been around in various forms for millennia, using strand-over-strand formats, the layer-by-layer techniques inherent in additive manufacturing is clearly a much newer technology to be adapted.

Woven fabrics rely on strands of fibers; if thin filaments could be used and printed in open weave patterns, could they replicate textile-like structures?

The German team was on the case, and they’ve produced results from three distinct arenas of testing. An FDM 3D printer using PLA material was used in an attempt to reproduce layered cloth patterns. PLA laid in open structures, with no support structures, could replicate the open weave pattern of the test structure, but came with the significant drawback of fragility. Even with a minimum 0.4mm diameter, the “strings” were too prone to breakage to be viable. The scientists, upon understanding that with current filament technology, more durable strings were simply impossible, chose to end their pursuit of this tack at these tests.

Next up for the team was lace.

Lay-Felt filament from inventor Kai Parthy was used in an FDM printer to replicate lace-like structures with a partially open base layer but no free-floating areas. Because of this latter factor, FDM printing was a smooth process this time: all the connection lines possessed large enough diameters to not be susceptible to the breakage of the previously attempted strings. 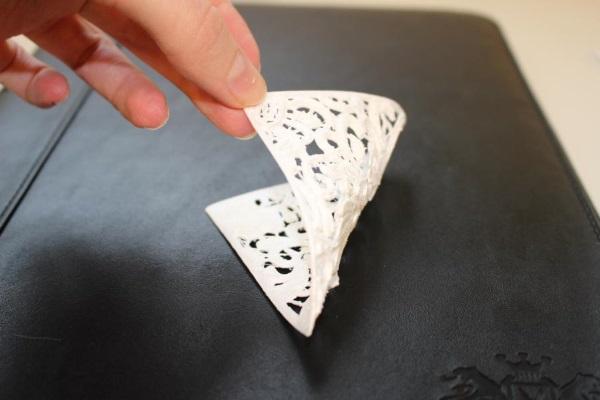 The printed lace could further be worked through a pretty low-tech methodology: soaking it in warm water for a few minutes to a few hours dissolved the hard parts of the material, softening the piece to better resemble flexible lace.

Third up was weft knitted structures.

This attempt proved to be the team’s biggest breakthrough, as weft knitted 3D printed structures could actually resemble fabric for truly wearable clothes. It wasn’t necessarily a smooth process, though, as some trial-and-error was definitely needed. The team first used a CAD model (created using Blender and Adobe Illustrator) that could be used for either SLS or FDM printing technology, both of which were used in these trials. SLS 3D printing was tested first. With a minimum distance between stitches of 0.4mm and a material thickness of 0.8mm, the SLS printed nylon piece had the right look of a weft knitted structure. Unfortunately, the SLS print was inflexible, rendering it unsuitable for textile uses. FDM technology was tested out next. First attempts were with BendLay filament, which had to be magnified to a minimum material thickness of 1.88mm, but the support structures were too delicate to print up, instead turning into weird material clots. FDM technology was next used with a soft PLA material, which did not require support structures and produced a surprisingly superior product. It’s not perfect — still with connections between stitches — but the structure was clear, the stitches mostly separate, and most importantly, it was flexible. It’s still not ideal, but it could certainly be a step toward a future where textiles can be created via 3D printing. The softened PLA is still too rough, especially compared to actual textile fibers, but flexible materials in 3D printers might just have a future with a few more generations of development. The German research team also thought about multi-material iterations of 3D printed textiles, conducting a brief experiment with a three-layer base. A model using three or more layers of printed materials could use soft PLA, with reinforcements made from hard PLA, BendLay, or other materials.

What do you think? Will 3D printed textiles be a product in the future?  Discuss in the 3D Printed Fabric forum thread on 3DPB.com.