The Army is no stranger to 3D printing, and so far we’ve seen this demonstrated in concepts for body armor, MREs, and using the technology for fabricating replacement parts. Now, with the advent of some impressive and innovative unmanned aircraft systems, Army researchers are showing a new level of commitment in their exploration of 3D printing.

At the Army Expeditionary Warrior Experiments (AEWE) in Fort Benning, GA from December 1-3, engineers from the Army Research Laboratory were invited by the US Army Training and Doctrine Command to launch their new 3D printed unmanned aircraft. The on-demand portion of this new invention comes into play when an Army patrol needs UAV support. At that point, soldiers enter data for requirements into the system. It’s configured expediently, 3D printed, and in the hands of those who need it within 24 hours.

“We thought they’re not going to think that’s fast enough, but, actually it was the opposite,” Spero said. “The timeline of 24 hours to receive a mission-custom UAS fits right in line with the way they plan and execute their missions.”

Army researchers, already aware of what 3D printing can do, are now showing different ways they are cashing in on the benefits as on-demand items can be made without a middleman (even if just for a temporary part while waiting on a permanent one), and they can be made quickly and affordably. For an object like a drone, 3D printing is beneficial as it allows for production not only of a custom design but also lightweight parts with whatever complex geometries may be required. 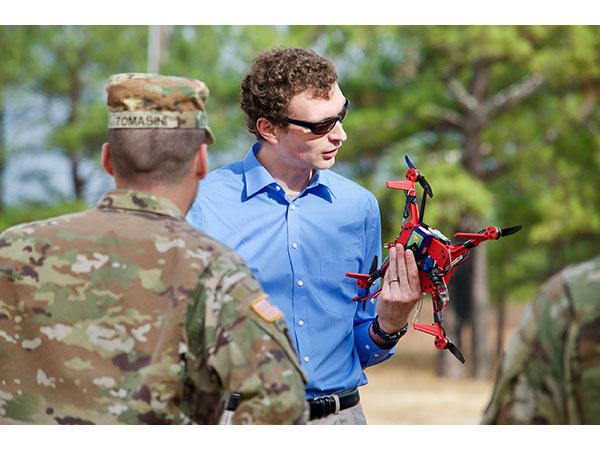 John Gerdes, an engineer with the U.S. Army Research Laboratory, explains the capabilities of the On-Demand Small Unmanned Aircraft System, or ODSUAS, to Soldiers at the Army Expeditionary Warrior Experiments, or AEWE, at Fort Benning, Georgia, Dec. 1, 2016. [Image:  Angie DePuydt]

“Drones or quadcopters are really getting big right now, I mean in particular just the commercial and hobby markets have shown what can be done with a small amount of money,” said John Gerdes, an engineer on the project. “Additive manufacturing or 3-D printing has become huge and everybody knows all the great things that can be done with 3-D printers. So we figured let’s assemble these two new technologies and provide a solution to soldiers that need something right now and don’t want to wait for it.”

And while drones today may often be associated with hobbyists, especially in the 3D printing realm, the creation and launch of ODSUAS was no game. Hours of development, testing, and design verification went into this drone before they put it into the air for their peers to see.

“It was good that we didn’t have any mistakes on game day,” said fellow engineer Nathan Beals. “The day before we did some test flights and worked out some kinks. I think we had the quad up to 55 miles per hour.”

Along with showing off the drone, they were also able to demonstrate the power of 3D printing—both in the air and on the ground as they had a machine on site.

“Before we even started the briefing, we set up the 3D printer in the conference room and started a print job,” said Spero.

They used the 3D printing demonstration to make something highly applicable to the soldiers’ work: a bracket for small arms, called a Picatinny Rail.

As they continue to refine their 3D printing and improve the drone, Spero says they will continue to offer modifications that will allow for less noise, long standoff distance, heavier payload capacity and better agility. He points out that the heavy payload will be most difficult to achieve.

The ultimate goal is to continue making 3D printing accessible for soldiers.

“This isn’t just about UASs,” Spero said. “It’s about forward-deployed, 3D printing to help the Soldier.”

Discuss in the 3D Printed Drone forum at 3DPB.com.