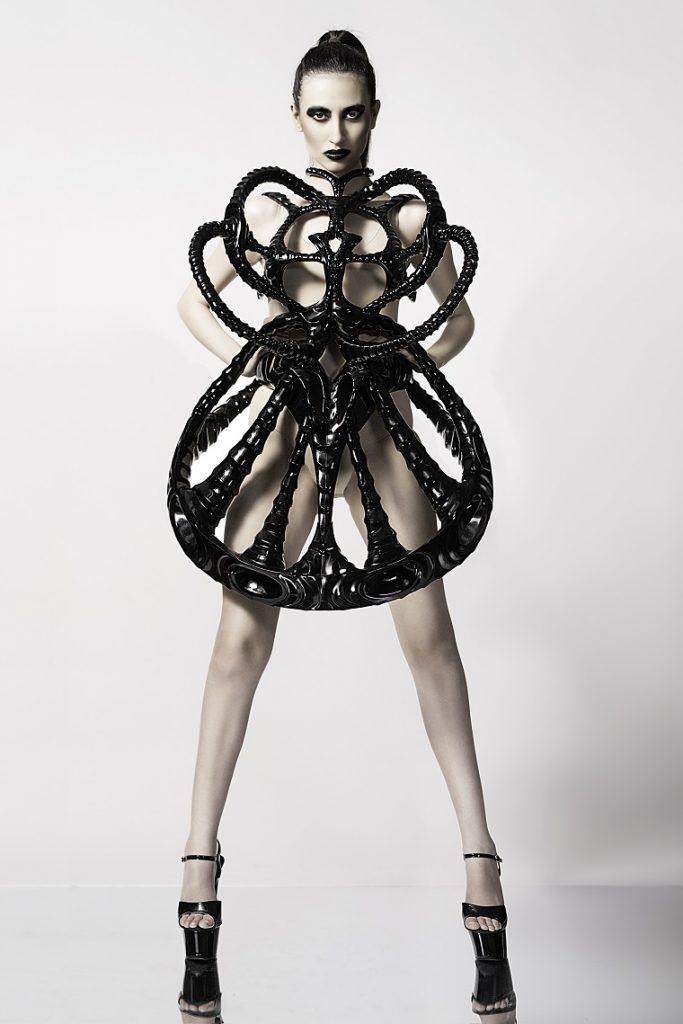 This dress is out of this world. The Vortex Dress, created by fashion designer and design engineer Laura Thapthimkuna, is as close as you can get to interstellar fashion. But just because it looks like it came from outer space doesn’t mean that the design just fell down from the heavens. Instead, it is the result of a lengthy and engaged process of design, redesign, investigations into technology, and fundraising through Kickstarter that finally allowed her to bring the dress off the page and onto the stage.

It started nearly two years ago with the creation of a series of sketches stemming from biomorphic funnel-like shapes. The garments were decidedly otherworldly in their forms and their creation posed a challenge to traditionally used garment production techniques as well. The sheer size of the final piece Thapthimkuna chose for creation added yet another layer of complexity to the process of bringing it to life. The breakthrough came when she recognized the possibilities 3D printing provided:

“I used 3D printing to create this design because I couldn’t see any other way of creating it. Also, it was a great opportunity to design my first fully 3D printed garment. 3D printing adds the value of innovation by showing what’s possible when going outside of my comfort zone as a designer…I would say one unique thing about the print is its size which was also a challenge because I had to anticipate weight distribution and center of gravity.” In addition to the sheer technical abilities of the 3D printer, working with a process such as this for creating a dress forced Thapthimkuna to work as part of a team to create her vision. This manner of working was among the biggest challenges, but also came with significant rewards. In addition to learning to incorporate other people into her processes, she finally had to recognize that she would have to allow a machine to come in and be part of the team. She explained the difficulties she experienced with the collaborative nature of the design process as well as the benefits:

“Learning to let go of the notion that I have to do everything myself was challenging for me initially. As an artist I’ve always done everything myself from start to finish, with 3D printing, I need to work with others and let them interpret my vision to an extent, which turned out to be very rewarding in the end.” The dress itself looks like a combination of an exoskeleton and the kind of breathing apparatus one might wear in a biohazard. Its production in paintable resin, which was then painted black, gives it both the velvety darkness of space and the luster of an unimaginable number of stars and suns. The model wearing it appears to be in the grasp of an enormous beetle and there’s a bit of a visual connection between the fashion photos and the aesthetic of Burroughs’ Naked Lunch.

It’s a fascinating project that combines the best aspects of design: bringing together previously disparately conceived-of information, creating new ideas of value, and engaging collaboratively to push the boundaries of the possible into the next set of standard practices. Discuss in the Vortex Dress forum at 3DPB.com.