Imagine that you had invented a thingamajig that was widely recognized to be of high quality and very useful. Soon, everyone was buying one and your hard-earned investment was paying off. The, suddenly or slowly, purchases started to drop and the money was only come in dribs and drabs. You’d reached the dreaded saturation point at which everyone who needed your fantastic thingamajig already had one and, since you had created something with such high quality, the only people who ever purchased another were those who had lost it somehow. At this point you have to invent something else that everybody is going to need if you want to continue to make money. 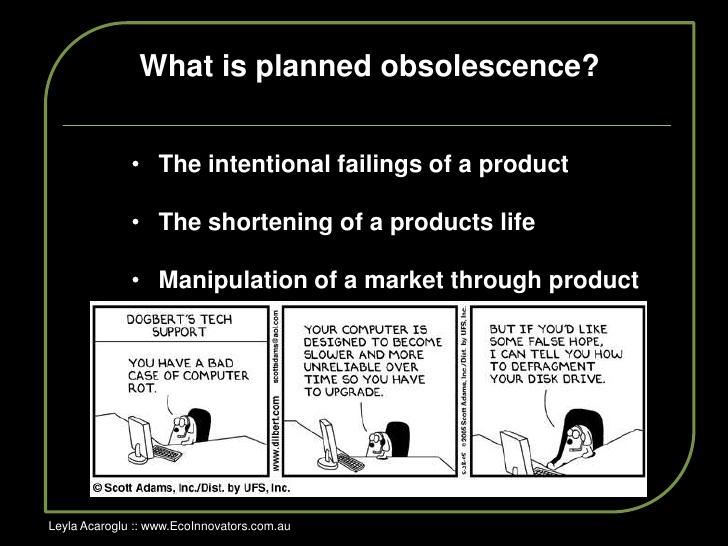 If, however, your invented doohickey had in it a joint that weakened and broke after 200 uses or if the outer covering of it could be redesigned to make the old one look so unfashionable as to be embarrassing, why you’d be back in business. The idea of planning for future failure, or engineering need for continuing purchases into a design, is termed planned obsolescence and was popularized as a concept in the 1950s by Brooks Steven.

The idea of creating a product with a built-in design flaw so that new purchases would be required is so off-putting that it is actually illegal in some places. This includes the practice of offering the spare part for purchase only for a limited time, requiring the purchase of an entirely new unit once those parts are no longer available. It’s not necessarily a result of a shadowy cabal meeting to determine the best way to fleece the consuming public, but whatever its roots, 3D printing is providing a way for consumers to plan their way out of planned obsolescence Imagine if your fantastic whooziewhatsit breaks one of its clamping ferambulators and the company, Whooziewhatsit Inc., tells you that they no longer make those because they have rolled out the Whoo-z 2.0. Instead of chucking your old model that you have grown to know and love, you could simply create a new pair of ferambulators and keep right on getting enjoyment out of the model that you currently own.

Thanks to the open source, share and share alike nature of the 3D printing community, you most likely would be able to just download the part that someone else had already 3D modeled rather than struggling to create the digital model required for printing. And with a plethora of online 3D printing services, such as Sculpteo, you wouldn’t even actually have to print them yourself. In effect, a catalog of pieces and parts would always be available no matter whether or not the maker of the original device decided to continue to produce them. These kinds of databases are already available through places like MyMiniFactory, which has an entire category dedicated to spare parts. This isn’t necessarily something that is leaving companies grumbling; the French consumer electronics company Boulanger has just recently launched a platform that allows their customers to download CAD files of extra parts. It calls the catalog Happy 3D and it comes as part of a recognition that customer happiness breeds customer loyalty. Even for those uninterested in printing replacement parts, simply knowing that the company has made the efforts to provide these kinds of opportunities creates a good feeling toward the manufacturer, something necessary to win the competition for consumer dollars.

This isn’t just good for customers and companies in terms of money, it’s also something that could potentially reduce an enormous amount of unnecessary waste that makes its way to landfills every year. It’s nice when something helps more than just the pockets; it could be part of addressing environmental impacts, the culture of dependence, and the general psychological state of the people living in a consumer society. Discuss in the Planned Obsolescence forum at 3DPB.com.