It’s a machine that many say is transforming the world as we know it. Others prefer to say it is the catalyst behind the next industrial revolution. The 3D printer is changing lives; the 3D printer is saving lives. It’s the rock star of the high-tech world for sure, created by Chuck Hull, co-founder and CTO of 3D Systems.

Now, this very first 3D printer is taking its rightful place as a Historic Mechanical Engineering Landmark, dedicated in a ceremony yesterday, May 18th, by the American Society of Mechanical Engineers (ASME) at the 3DS Rock Hill, SC headquarters. Hull and his formidable invention, the SLA-1, are being honored, according to a press release from 3DS, for ‘transformational impact in engineering and manufacturing.’

Hull is by all rights the inventor of 3D printing. While many have come along the way after him—with refinements, customizations, and all sorts of features ultimately leading to a quite fierce marketplace bustling with a wide range of hardware, software and materials—this is all due to the work he began in 1987, creating stereolithography and also creating exceptional disruption in the world of manufacturing. The famed SLA printer which bears Hull’s fingerprints and his stamp of undeniable genius will join over 260 ASME landmarks around the world.

Originally meant to simply transform the world of the engineer for prototyping, allowing for greater speed, quality, and productivity, Hull’s concept has hit the mainstream and is now allowing designers, architects, and hobbyists around the world to find their true potential in creating. They are able to design and bring complex geometries to fruition, with infinite options for customization and a level of affordability that now makes many things possible, such as 3D printed prosthetics for children in developing nations. Soon, scientists will be 3D printing organs for transplant, allowing people who may once have died while on waiting lists to live, and go on to enjoy fruitful lives. “It’s a great honor for 3D Systems, and for me personally, to receive recognition by ASME for our original technology,” said Hull. “Although I expected 3D printing to be embraced by manufacturers, I never could have anticipated how widespread 3D printing is today, or the types of things that people are doing with it. For the past 30 years, we have had the distinct pleasure of watching our innovation spur more innovation, and we are excited to continue to shape the future.”

3D Systems grew to be one of the largest and most respected of 3D printer manufacturers and solutions, most recently showcasing their new Figure 4 technology (unveiled at AMUG in April) which the company describes as ultra-fast, modular, additive manufacturing designed for the automated manufacturing environment, featuring a robotic arm. You will definitely want to watch the video below as it demonstrates how these new processes, working up to 50x faster, makes additive manufacturing ready for the assembly line—as the true revolution everyone has been predicting really begins to move in. 3D Systems is attaining their goal, not so many years later, of taking 3D printing far beyond rapid prototyping and deep into disrupting the world of manufacturing. And it all began with the SLA-1, now being formally celebrated and on display as the technological royalty it is in the 3DS lobby, with a special plaque on display next to it. “The SLA-1 3D printer is a most deserving addition to ASME’s roster of mechanical engineering landmarks,” said ASME President Julio C. Guerrero. “SLA-1 is an integral piece of history in one of the world’s most promising technologies, and has profoundly influenced how we think and make.”

Indeed Hull must today look at the multi-billion-dollar industry that is 3D printing and be somewhat stunned at the progression, not to mention the incredible good being created worldwide. Can you imagine being the person behind a technology that nearly everyone in the world knows about and wants to try their hand at? Can you imagine being the person behind all this disruption in manufacturing? That’s certainly a good burden to hold on one’s shoulders—and it must seem quite unbelievable at times. We have the privilege of learning new things on an hourly basis here at 3DPrint.com, discovering and reporting on mind-boggling innovations which are often deeply inspiring. Thank you, Chuck Hull. We look forward to seeing much more from 3D Systems, as well as all who take the technology and use it for incredible good.

What are your thoughts on this 3D printer that started it all? Discuss further in the SLA-1 3D Printer and Hull Recognized forum thread over at 3DPB.com. 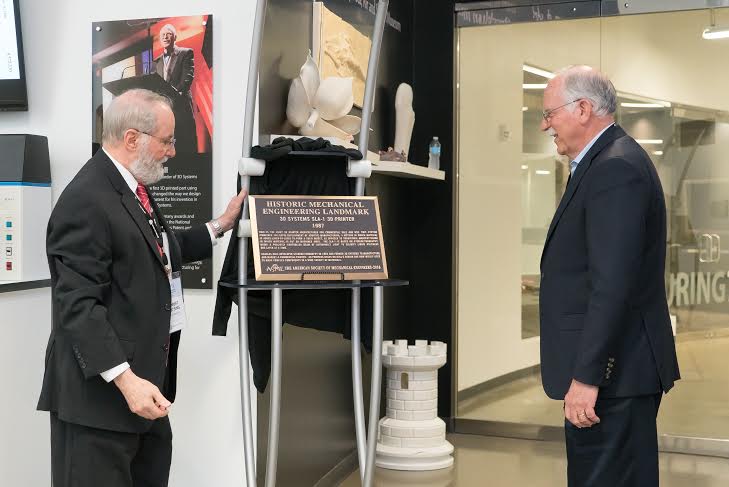