Over two years ago a scrappy 3D printer startup called Pirate3D was founded by three recent college graduates, who promptly launched a crowdfunding campaign on Kickstarter for their first 3D printer, the Buccaneer. It was billed as a 3D printer that anyone can use, and priced low enough that it seemed almost too good to be true. Some early bird pricing came in at under $300, and the average backer of the campaign would still get a 3D printer for less than $500. Word spread fast, and the campaign quickly funded the original goal of $100,000 in less than ten minutes, passed $500,000 in four days and finally ended having raised nearly $1.5 million, becoming (at the time) the most successful 3D printing campaign in Kickstarter history.

Things were looking pretty good for Pirate3D founders Brendan Goh, Tsang You Jun and Roger Chang–they were the talk of the 3D printing industry, flush with heaps of startup cash and even a few industry awards under their belt. But they were also left with the monumental task of manufacturing and shipping out 3,389 3D printers, with an entire ecosystem built around their own custom software. The trio had plenty of money, but unfortunately it seems none of them knew how to spend it. For two years a majority of the Buccaneer campaign backers watched as their money was left hanging in limbo, and Pirate3D, admittedly in good faith, tried desperately to fulfill their orders. Even raising an additional two million dollars from private investors couldn’t seem to keep the Pirate3D ship afloat. Incredibly, in an effort to raise capital quickly, the company actually started to deliver units for retail sale while almost 75% of their original backers went unfulfilled.

“End of A Chapter but Not the Book”

And so here we are, more than two years later with 60% of the original orders having still not been fulfilled and no refunds in sight, Pirate3D is finally throwing in the towel and admitting defeat. On October 13th, Brendan Goh sent the original Kickstarter backers a message that was essentially saying that they should abandon their hopes of receiving their Buccaneer any time soon, if ever. According to Goh, not only had Pirate3D operations already been frozen for two months, but they would be frozen for at least three more months due to cashflow problems:

“We are now about 40% through deliveries. The company experienced this situation last year in June as well, because of the same reasons. Initially, we spent too much on R&D and bit off more than we could chew. Developing an entire ecosystem of our own combination of hardware, software and library was a far more costly engineering project than expected.”

“With our current hardware architecture including an onboard processor, wifi modules and linear rails, costs to build these machines have exceeded what we collected for them.”

“Unlike newer Kickstarter projects which are allowed to charge for shipping after the campaign, we weren’t allowed to. As much as possible, we have tried to bear these costs. However, paying 600 USD each time for just shipping to South America and similar amounts to other places has proved to be too much a burden for the company. Along with handling international deliveries for warranty and repairs, which most Kickstarter projects don’t do (and now we know why), has led us to where we are now.”

After assuring their backers that the Pirate3D team had not simply taken their money and ran, Goh explained that in fact they have put everything that they have into the company in an effort to meet their commitments and simply had no more to give. They suggest that it was a lack of competence not commitment that has caused this, and they have the empty savings accounts and outstanding loans to prove it. So rather than put more money into a failed product they are going to turn their attention to a new product that can be made cheaper and faster. And any new investors that they are seeking have told them, in no uncertain terms, that they would not invest in their debts.

“We are sourcing new rounds of investment to continue our work for this project. However, most of the investors we have spoken to want to place us under the covenant that the monies can only be used for working capital and not for fulfilling old obligations. Our backlog has to be cleared out of free cash flow (profits) which will not be for at least 1-2 quarters.”

“This did not surprise us and we find that it would be the wise thing to do, or the company will run into issues ever so frequently which will not be good for either the backers or the company. Between the two options of having the chance at fulfilling our obligations and closing the book now, we believe it’s a fair choice.” So basically, any new money brought in to the company has to be used to make new products that can be sold for a profit, not to clear any outstanding debts. Pirate3D would only be able to begin fulfilling orders again if the company was bringing in enough additional cash flow to pay investors and keep the company running. With no existing replacement product in sight, and the team only going back “to the drawing board,” the chances of that happening within “1-2 quarters” honestly seem very unlikely.

The reception from their original backers was, predictably, unpleasant. Thankfully after two years of this, Goh and the rest of the Pirate3D team have probably become used to it. However they are quite adamant that, despite there being little to no realistic chance that they will be able to deliver their outstanding printers any time soon, they would still be trying. Goh even returned to Kickstarter a day after the previous update and promised that despite how everything looks Pirate3D was still going to deliver something to them, they just don’t know what it is yet.

“To clarify our last update. We are not shedding our obligations to you. What we are doing is stopping building too many of the current machine, go back into serious hardware mode, and build a machine that we can fulfill backers within cost and also to build a healthy foundation for the company.”

“In short, this is us letting you know that we have been working with technology whose foundation was laid 2 years ago (which has its limitations though good in some ways), we are going to throw it out the window, go back to basics and build something even better.” 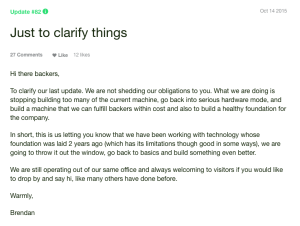 It is hard to not feel a little bad for the Pirate3D team. What started out as a dream has quietly devolved into a bit of a nightmare that they are not going to wake up from any time soon. Although the fact that I didn’t back the project and am not out any money makes it pretty easy for me to extend my sympathy to them. It is probably a lot less easy for the nearly two thousand people out five hundred bucks to do the same. My hope is that eventually, no matter how unlikely it seems, Pirate3D will be able to deliver on what they promised, or at the very least are able to refund for the printers that will go unshipped.

I also hope that the woeful tale of the doomed Buccaneer acts as a reminder to the Kickstarter community that in the world of crowdfunding, nothing is a sure bet. If a price is too good to be true, then you should always treat it like it was too good to be true. And if you do decide to back a Kickstarter campaign, be prepared to lose any money that you’ve invested. Kickstarter is not a store where you can buy what you want and be guaranteed of its delivery, but rather it’s more like a falling star that you make wish on, and you just have to hope that it drops in your lap.

3D Hubs has responded in the giving vein of the maker community, setting out to help those who wished to back the Buccaneer 3D printer on Kickstarter. An official statement from the company explains:

“Are you one of the 3,389 who pledged over $300 to receive a Pirate3D Buccaneer 3D printer but have been left without one?  We feel for you.  Through the rest of 2015, we’re offering Pirate3D backers $25 in 3D Hubs credit to give our service a try.  Simply send us proof that you were one of the backers of Pirate3D to pirate3D@3dhubs.com, and we’ll promptly send you a voucher.”

Were you a backer of this project?  Let us know your thoughts on this news.  Discuss in the Pirate3D forum thread on 3DPB.com.