Intel (NASDAQ:INTC) has been very busy working behind the scenes while the world has had their eyes on the incredible revolution being forged with 3D printing—and who could possibly look away as so many sleek, shiny new 3D printing machines are being offered left and right. Innovators, students, and home hobbyists are producing incredible designs we would all love to aspire to making ourselves, as well as thinking of the next great innovation—to be produced right from our desktop or workshop.

But very important to this world of 3D printing is another piece of equipment that’s not quite as jazzy but is often just as required: the scanner. Not too long ago at all, this piece of equipment was considered so cost-prohibitive that only those with access to big budgets had 3D scanners, and if you wanted a 3D printed scan of yourself, it was a novelty you had to have 3D printed by one of the big companies offering these services, but it was rare and scattered, and often more in Europe than here in the US. Intel obviously knew which part they were meant to play in this new journey of technology with 3D, and they have run with it. Currently, we are all watching Intel’s RealSense technology explode onto the scene—with perfect and strategic timing–and in places you may sometimes not even realize it’s being used as they have begun product partnerships with companies like 3D Systems, and many PC manufacturers like Dell, Acer, and more. The RealSense technology and intuitive apps include not only 3D scanning but also hand and finger tracking, facial analysis, speech recognition, and augmented reality.

With their integrated RealSense camera and scanning technology, Intel has been covering the market for use in 3D scanning with tablets and laptops—and covering the headlines as well, allowing an eager international community of technogeeks to discover and explore a big, brave new world in 3D scanning and 3D printing, and retailers are hopping on board to offer a melee of services as well. Intel’s planning and hard work is paying off as consumers are discovering they can literally capture not only themselves—but the world—and they can do it on their own, in their own time, wherever they want.

As is the current trend with so much of the digital design and 3D printing arena, just when you thought things couldn’t get even more progressive or completely amazing, the technology companies top themselves again. And Intel has just announced formally—after plenty of hinting—that they will be adding their RealSense technology to the smartphone. All that excitement and technology is about to become compacted into the much smaller platform of your phone.

Announced by CEO Brian Krzanich at the opening day of the Intel Developer Forum in China on April 8, the company showed up a new prototype for a six-inch smartphone that holds the integrated RealSense technology. For its new home with the smartphone, the RealSense camera and technology have been reduced to fifty percent of their former size. 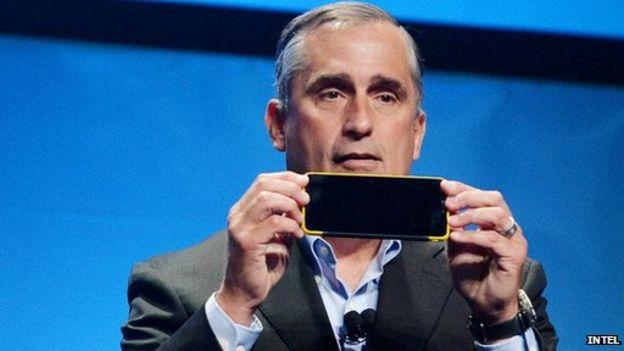 “You can imagine the efficiency and the opportunities for innovation,” Krzanich said to the crowd at the event.

This announcement comes along with a larger conversation regarding their plans for working and expanding in the Chinese market where they have been not only investing to the tune of around $7.7 billion in that area of the world but also founding multiple partnerships with companies there. Intel has 7,500 employees in China right now at 27 different headquarters, which makes quite a statement regarding their solid presence in the country—and it’s no surprise, considering they pull $10 billion a year in income from business in China.

While the RealSense technology is a 3D showstopper that’s garnering a lot of attention with the technology-hungry generation that’s savvy enough to really see what they can do with owning 3D scanning, Intel has other complex, intense plans and goals as well. They are also setting down serious roots in the arena known as the Internet of Things, which allows us to network with technology mainly through wifi. Intel is apparently developing a lab toward creating progressive technology in this area—set in China as well. Also in the works is a serious plan for integrating their Atom x3 chip family, also known as SoFIA, from the basic works like tablets and smartphones into the internet of things world. Chips are expected to offer 3G, LTE, WiFi, and Bluetooth capabilities, as well as running on the Android and Linux platforms.

Developer kits will be available toward the end of the year and manufacturers are already in line to sign on with 14 original design manufacturers currently developing systems that will run on the quad-core Atom x3-C3230RK, as well as 20 other companies who’ve already announced they will be developing a variety of platforms with the Atom x3 reference designs.

Have you been using any Intel RealSense technology for 3D scanning? Will you be looking forward to having an app on your smartphone for 3D scanning with RealSense? Tell us your thoughts in the RealSense 3D Scanning forum over at 3DPB.com.

Beyond Prototyping: 3D Printing with XYZPrinting & Stratasys at IMTS 2022

While attending the IMTS 2022 trade show in Chicago, I made a lot of quick stops at booths in the Additive Manufacturing (AM) Pavilion to try and make as many...

After reporting that the first quarter of 2022 was its strongest in six years with a revenue of $163.4 million, Stratasys (NASDAQ: SSYS) has introduced a new loyalty and discount...

Ultimaker, the Dutch desktop 3D printer powerhouse, has announced the release of a metal expansion kit for its S5 platform. The S5 is Ultimaker’s largest-scale 3D printing platform, and is...