One thing that’s especially exciting about following a new, rapidly growing industry such as 3D printing is that in many cases, you can witness the very moment that the technology takes hold in a country or region that hasn’t experienced it before. In Pakistan, that moment came with the launch of Xplorer 3D, the first 3D printer manufacturer in the country, whose self-named printer began increasing the awareness and popularity of 3D printing in the region.

Now, Xplorer 3D has become a facilitator for another first in Pakistan. Along with their authorized retailer Viscous.co and 3D printed prosthetics provider Bioniks, the company was able to help a young boy become the first child in the country to receive a 3D printed hand. Five-year-old Mir Bayyaan Baloch was born without his right hand, but thanks to the determination of his father and the support of those dedicated to improving lives through 3D printing, he now has the ability to do everything other children his age can do. Mir Bayyaan with his father

When Bayyaan’s father, Mir Umer Baloch, began researching affordable prosthetics for his son online, one of the resources he came across was Team UnLimbited, aka Drew Murray and Stephen Davies of Britain. The two e-NABLE volunteers are the designers of the Unlimbited Arm, an elbow-driven prosthetic for individuals with a functional elbow and partial forearm but no wrist or hand. The design has become a popular option for children with missing arms, and it was a perfect option for Bayyaan, whose forearm stops right above where the wrist would be.

Mir Umer Baloch reached out to Bioniks, who took on Bayyaan’s case as a special project. With an Xplorer 3D printer at NED University of Engineering and Technology, they carefully designed and printed an UnLimbited Arm in bright orange and yellow. It took some work and adjustment to fit the device to the boy’s small arm, but finally Bayyaan has a functional, comfortably fitting arm that he can use to grasp and hold objects, as well as shake hands and give high fives, which he seems visibly excited about. I’m not sure if Bayyaan knows that he is the first child in Pakistan to receive a 3D printed prosthetic hand, but when he gets older, he may understand the significance – particularly if his case leads to similar opportunities for other children in his country. One of the amazing things about e-NABLE and their 3D printed prosthetic outreach is how responsible YouTube and other social media have been for the spread of the program. A parent or therapist in Japan goes online, finds a video of a child in South Africa, and is inspired to create or request a device for their own child, who in return may catch the attention of someone in India, and so on.

In the case of Bayyaan, his father discovered the story of Isabella, the first recipient of the UnLimbited Arm, online, and by having a device created for his own child, he added another link in the chain, bringing e-NABLE’s 3D printed prosthetics to Pakistan for the first time ever. Will Bayyaan’s story lead to another child – in his country or elsewhere – receiving a life-changing device? Who knows, but it’s a wonderful question to be able to ask. You can watch Bayyaan’s story at Bioniks’ Facebook page. Discuss further in the Pakistani Boy Receives 3D Printed Hand forum over at 3DPB.com. 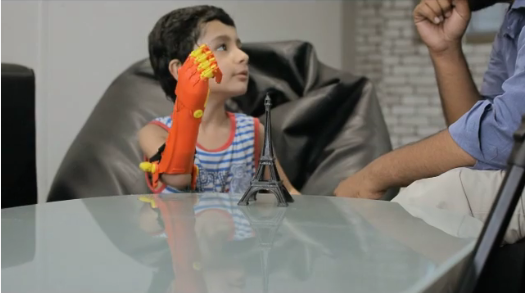