3D Printed House 1.0 – Printed in Salt and Like Nothing You’ve Seen Before The 3D printing of buildings is not something new to those of you who have been following the news lately. There have been several successful attempts at 3D printing construction grade materials to form exteror walls of buildings. In fact, in China they have used 3D printing to construct the exterior walls of multiple small sized homes. Even in the United States we’ve seen a man build a 3D printer in which he intends to use to construct his home in Minnesota. Even in Slovenia, a company named BetAbram plans to start selling 3D printers capable of printing homes of various sizes. These are just a few of the many 3D printed home projects, currently taking place around the globe.

What do all of these 3D printed home projects have in common though? If you said that they are all focusing on the exterior shell of the homes, then you are right on the money. These on-going projects are all focused solely on creating the outer concrete shells of homes, while still requiring traditional construction means for the trusses, interior walls, roofs, etc.

One company, by the name of Emerging Objects, realizes that the use of 3D printing is not limited to only creating the exterior support of buildings. In fact, they have decided to focus mostly on the interior construction and design aspects of buildings.  Currently referred to as ‘3D Printed House 1.0’, the project has been ongoing for the past year or so. “It is the culmination of several proof of concept, full scale projects we have been developing in the past year that demonstrate new materials for 3D printing and different assembly processes,” CEO of Emerging Objects and Associate Professor at the University of California, Ronald Rael told 3DPrint.com. Jin Hai Lake Resort in Beijing, China has commissioned the schematic design to be done by Emerging Objects. “It will be included in a catalog of possible houses for the development and considered for construction if selected by a landowner,” Rael explained.

3D Printed House 1.0 is not meant to be a completely 3D printed home. It instead is an integration between traditional methods of home building, combined with 3D printing techniques. Most of the other 3D printed houses that we have covered in the past, have required extremely large 3D printers (larger than the size of the home they are printing). Rael’s project, on the other hand, uses 3D printer farms consisting of many different industrial level 3D printers, which are used to print smaller building components such as bricks and tiles. In fact, they utilize 3D printers that many of us are already familiar with.

“We use Zcorp 310, 3D Systems Projet 360/460/660 and Voxeljet,” Rael told 3DPrint.com. “In contrast to liquid extrusion with large scale machines, our approach is a printer farm that produces precise building components using a wide array of materials, many of which are from waste streams or renewable resources. Using powder 3DP gives more material possibilities. A printer farm insures constant production of manageable building components to make large assemblies, whereas if one large machine breaks, all production stops until repairs are made. Accuracy and tolerances are also higher with powder 3DP. Prototype of the interior rooms of 3D Printed House 1.0

The company prints the components that are used in the process, using both renewable and innovative materials, such as a cement polymer as well as a salt polymer that Emerging Objects refers to as Saltygloo. Saltygloo is made up of harvested salt, that is combined with a glue to form a hard, strong, lightweight, translucent, inexpensive, waterproof construction material. The harvesting of salt is extremely affordable, and the company relies on a 109-year-old salt crystallization pond in Redwood City, California to harvest it.

The 3D Printed House 1.0 consists of large rooms that are subdivided by vessel-like sub-rooms, which are all printed using this unique Saltygloo. The properties of the vessel walls are such, that they allow for a very unique lighting and glowing effect, that can be observed both inside and outside of the vessel. The vessels, while letting a good amount of light in through the opening at the top, also remain rather private from people on the outside. “The vessels serve as objects that define spaces within the larger volume, as well as contain intimate spaces within,” explains Emerging Objects. 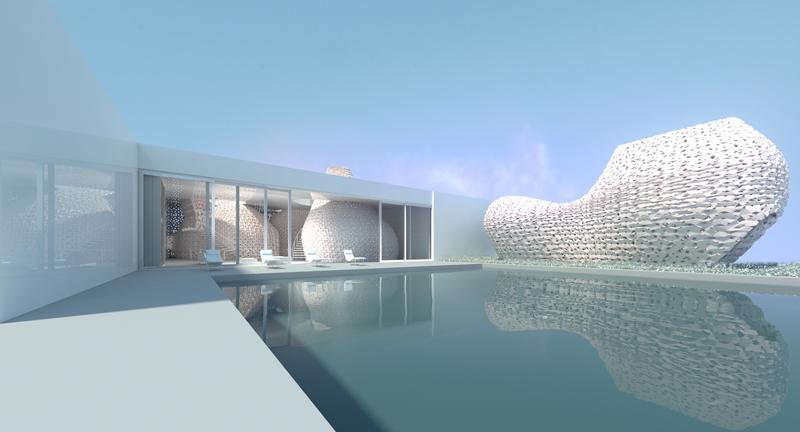 The exterior of the 3D Printed House 1.0 uses a patented material, developed by Ronald Rael and Virginia San Fratello. It is a cement polymer, that is fiber reinforced. While being extremely light weight, this material is actually stronger than traditional concrete, and it can have a sand blasted, glossy or satin finish. a Picoroco Block, 3D printed and used for exterior walls

The cement polymer is 3D printed into what Emerging Objects refers to as Picoroco Blocks. These are their 12″x12″x12″ construction blocks, used for the exterior walls. The blocks feature openings in them, that allow for light to pass through in unique patterns, which change throughout the day as the sun takes its daily trek across the sky. 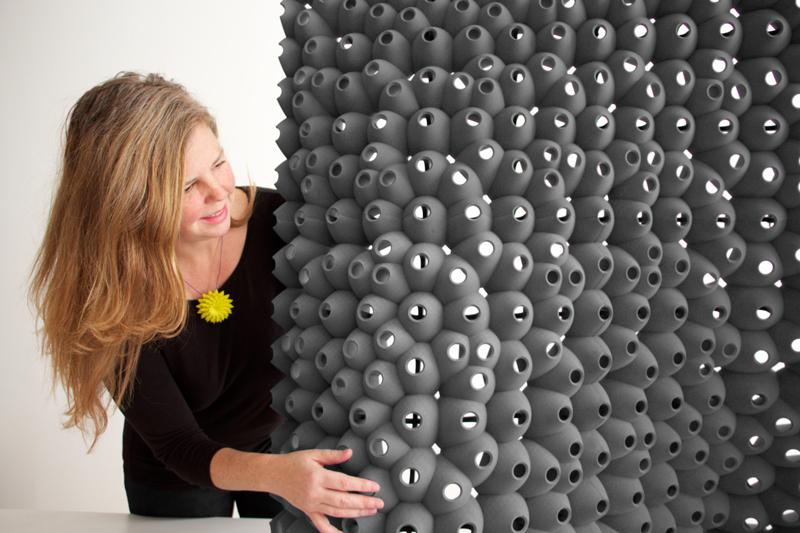